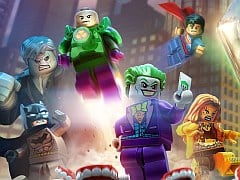 I don’t think I’ve ever played a game so clearly made with hardcore fans in mind. Not only is LEGO Batman 3: Beyond Gotham a DC fanboy’s dream come true (unless you happen to love one of the few characters not included), but also a LEGO fan’s too. If you happen to fall into both categories, knowing, for example, both who Mr Plastic is and what LEGO master builds are, then you’ve hit the jackpot. For everyone else, this is another slick, content-packed LEGO game that will feel incredibly similar to previous LEGO games you’ve played.

Dropping the open-world design seen in LEGO Batman 2 and the more recent Hobbit game, Batman 3 returns to a series of individual levels and a number of hubs and planets that can be explored. With a storyline that centres on the evil Brainiac’s intention to shrink down planets, and the involvement of the Lanterns, an open world wouldn’t really work. The result is a game that offers some lovely diverse locations, and a lot of fun, once it actually gets going.

The opening few hours were a bore. Mainly set inside dingy locations or dull space station rooms, it all felt rather ‘been there done that’. New playable characters were slow to arrive and the introduction of new suits for characters (giving them new abilities, such as magnetism, electricity, flight, etc) made for a rather prolonged tutorial. I wasn’t feeling the love. It was another LEGO game, done well, but there was no spark. And then things suddenly got a lot more interesting.

It takes a while, but once you’re outside the game comes alive. Not only do the levels become more colourful (especially the Lantern planet levels) and clever in their design, but the characters can use their abilities more and the increased cast plays off each other very well.

While the game is largely played from the same fixed camera angles the series has always used during levels, meaning you can’t pan around to take in the environments, parts of Batman 3 look lovely. A couple of boss encounters really impress, as do a set of shrunken city levels that are entirely made of LEGO. Sure, this isn’t a next-gen showpiece, but I paused on more than one occasion to take some snaps. Of course, the audio work here is brilliant, with top notch voice acting to deliver the humorous script, and all the classic music associated with the DC super heroes.

Speaking of the DC heroes, LEGO Batman 3 can’t help but suffer to the casual audience in comparison to last year’s Marvel Super Heroes game. While Marvel is on a high at the cinema, unless you are really into DC you’ll struggle to recognise most the characters here. Batman and the rest of the Justice League characters, along with some of the enemies, will be familiar faces, and if you’ve played the Arkham games you’ll at least know some of the Batman friends and foes, but this will largely be a game of discovery for many players. That’s not necessarily a bad thing, and you’ll know going in how much fanservice here will excite you or go completely over your head.

Designed for an audience so diverse in age (very young kids through to fully-grown adults with kids of their own), LEGO Batman 3 often feels like it can’t quite be challenging enough. I’ll admit to being stuck from time to time (entirely down to overlooking objects in the levels that needed to be destroyed in order to be built into something else), but the puzzles are borderline pre-school level and the mini-games are atrocious (aside from the shmup-lite sequences that resemble a super simple Resogun). A set of stages in which you have to run around Tron-like worlds are so poor I’m surprised they made the cut, and offer nothing other than tedium.

If you’re disappointed about the lack of open world, you can explore the Lantern planets via a moon base (Oa, for example, lets you drive vehicles around, but they all offer plenty to do along with the moon hub itself) and the hub zones (Batcave, The Watchtower and Hall of Justice) have so much to find that you’ll be playing well beyond the end of the main missions. As is always the case in LEGO games, there are an obscene number of characters to collect, bricks to find and secrets to uncover. This is a massive game that will keep you (and a split-screen friend) happy for a long time if you’re into collectables of the DC variety. Freeplay has always been a series staple and it’s great here, and there’s even a character customisation tool.

LEGO Batman 3 starts slow and then gets a lot better, and then overwhelms with so much content it’s hard to be disappointed. It’s hard to get really excited about a game that feels largely similar to how the series started with LEGO Star Wars almost 10 years ago on the PlayStation 2, but DC and LEGO fans won’t care as much about the sameness. For everyone else there’s no doubt this is a classy package packed to the brim with content, but new ideas are definitely needed. LEGO Batman 3 eventually becomes very good but it’s time the studio attempted to build a new mould.

How to build a new LEGO experience

If you read my review and thought, “They did that with LEGO City on the Wii U”, you’re right. They also offered open-world elements in numerous previous games, including LEGO The Hobbit and LEGO Batman 2. These were big changes for the series, but I still want more. I’d like the teams at Traveller’s Tales to look at the Ratchet & Clank games. Insomniac’s 3D adventure platformer series manages to tread the line between simple platforming and third-person action, offering control schemes that suit your play style. And it works very well.

Considering so many LEGO games are released it might also be wise to target a slightly older audience now and again, in order to offer more puzzles and more complex gameplay mechanics. Combat needs a reboot as it’s currently far too clunky, and the visual humour of the original games needs to be pushed more. It’s easier in games based on movies (hopefully the heavily suggested Jurassic Park game next year will make fun of some iconic scenes), but the reliance on voice actors in recent games has certainly lessened the slapstick.

And finally, building. LEGO is all about building things, yet in the games you do little more than hold a button to let your character quickly put together a random object needed to progress. There’s no sense of building anything. In the age of Minecraft, where young kids have shown themselves capable of doing pretty advanced things, it’s time the LEGO games embraced this.

LEGO Batman 3 starts slow and then gets a lot better, and then overwhelms with so much content it's hard to be disappointed.
8 Looks lovely So much to do it's overwhelming Amazing cast of characters Starts so slow it's a chore to play