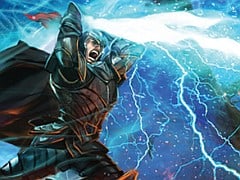 Back in 2006 baseball’s Curt Schilling did the impossible and managed to turn a hobby of questing through Azeroth into an actual RPG development studio. It should have been a disaster but instead Schilling, a born-again ex-Major League pitcher with no previous work in development, spent the next six years watching a pilgrimage of top-tier media talent hike through the foothills of 38 Studios and queue to work on Kingdoms of Amalur: Reckoning. The star-studded development cast includes former EverQuest designer Travis McGeathy, The Elder Scrolls’ Ken Rolston, Todd “Spawn” McFarlane, and fantasy novelist R.A. Salvatore.

You can’t help but compare Schilling’s efforts to Reckoning’s own premise – the story of what happens when you break free of your intended fate and make a fresh start. The game itself opens with your character’s death and resurrection. Your corpse has been tossed on top of a hill of bodies, and you promptly reawaken to be told you’re the only successful candidate of an experiment to bring back the dead. Unlike the fatalistic denizens of Amalur, who live out their lives prescribed to fate’s desires, you’re no longer bound to destiny, and can also change the providence of those around you.

For all the talk of escaping destiny, 38 Studios is a traditionalist when it comes to RPG development. Despite the M rating, this game is remarkably po-faced. It doesn’t bother with the provocative, like you’ll find from the likes of The Witcher, or the moral issues and racism underlying Dragon Age. Likewise, it isn’t interested in the touch-and-go sense of humour of the Fable franchise.

The result might be something lacking a certain flair for individuality, but in reality Reckoning is more a meditation on the genre. Like Blizzard, 38 Studios has a tendency to hunt and peck through the archives of various mechanics and apply what it’s learned. In Reckoning’s case this results in one of the most comprehensive RPG offerings from a single game.

At the best of times this translates to design choices that highlight the actual scale of Reckoning’s world. Despite being a relatively linear RPG, Rolston’s hand in the title makes sure it doesn’t stray far from The Elder Scrolls’ genetic pool. What you get is a damn big thing. Amalur’s five massive regions each have their own geographical style, ranging between packed forests, bayous, and desert canyons. Lore stones and harvestable items are scattered around each kingdom, the former just adding a sprinkle of narrative flavour and the latter used as crafting material, but each pushes you slightly outside the game’s prescribed path.

Similar to Diablo, the game’s loot fanaticism makes grinding mobs another reason to continue exploring. The combat, on the other hand, owes itself to Darksiders as much as it does God of War, emphasising knockabout button mashing over precision. Well timed blocks, dodges and parries are required when the game is at its most difficult, but for the most part Reckoning is a slaughterhouse of simplistic targets. Weapon combos and magic abilities add to your arsenal, while temporary buffs are scattered through each zone in the guise of rock monuments.

As Amalur’s fateless wonder your class is extremely malleable. While the usual Warrior, Mage, and Rogue archetypes persist, the lines between them are blurred. Reckoning encourages you to use different weapons without ever being locked in to any specific melee or ranged sub-category, and while you’ll learn to specialise as you start pouring points into your ability trees, the game allows for and encourages experimentation.

Destiny cards are accumulated as you level and give you additional stats specific to certain play styles. These get broken into Might, Finesse, and Sorcery talent trees, the three sections complemented by cards designed for those who split their points between two or even all three trees to create a hybrid class. The cards are also dealt liberally – users can switch between any of those already unlocked at any point.

The conceit of fate continues straight to the belly of the game in the shape of Reckoning Mode – the title’s heavy-duty time dilation ability that has you “unravel” the destinies of enemies when fully charged.

Similarly, Amalur’s emphasis on flexibility means crafting allows for old armour to be broken down and recycled into constituent parts to be reused for new designs if you ever decide to see a Fateweaver to reset your ability trees and have another pop with a different style of character.

Each zone has its own role call of fauna, ranging from ogres to variations on traditional supernatural fare like goblins. The wildlife is more fantastical than what you stumbled across in Skyrim, but there’s still a degree of naturalism to the world of Reckoning when you spot certain species fighting against each other on road sides as if battling for territory.

This all combines to make up a main quest line that lasts over 25 hours, and Reckoning is bolstered further with hundreds of side and faction quests.

Still, somehow despite all this life the various kingdoms of Amalur are largely characterless. There’s a pervasive sense of impersonality to the world: NPCs are wooden and strange, often unblinking and corpse-like during cutscenes. Their conversations can seem awkward in the context of the scene – my ageing, moustachioed hero has been referred to as “young one” enough times to baffle. Reckoning is more Westworld than Skyrim, a game that can feel more automaton than lifelike.

While Todd McFarlane’s work as art director helps provide some limited level of comic gore and style to the fight sequences, overall Reckoning still seems to hearken back to an all-too familiar art direction particular to Blizzard, with its palette of primary colours, vaguely cartoon style, and even quest hubs and exclamatory markers that wouldn’t look out of place in World of Warcraft. Add into this some basic BioWare-styled conversation wheels and you begin to get an idea of the difficulty of seeing the essence of Reckoning through its myriad slate of references.

Look deep enough and the spirit is there, however, with a mix of mechanics and lore that successfully ties Reckoning’s ruminations on fate to the workings of the genre.

Kingdoms of Amalur: Reckoning’s wholly undiluted overview of Western RPGs often amounts to a beige concoction of a thousand blended fantasy worlds, but it’s also a testament to 38 Studio’s inherent knowledge of the genre. It’s a workmanlike interpretation of what makes an RPG tick, placing a spotlight on all the right mechanics and features that most titles struggle to perfect. Regardless of the game’s bland exterior, Reckoning is considerably well crafted.

Reckoning is a workmanlike interpretation of what makes an RPG tick, placing a spotlight on all the right mechanics and features that most titles struggle to perfect.
8 A thorough knowledge of the genre Massive explorable environment Highly cliche'd Struggles to develop its own identity

An epic, open-world role-playing game set in Amalur, a mysterious and magical…

An epic, open-world role-playing game set in Amalur, a mysterious and magical…