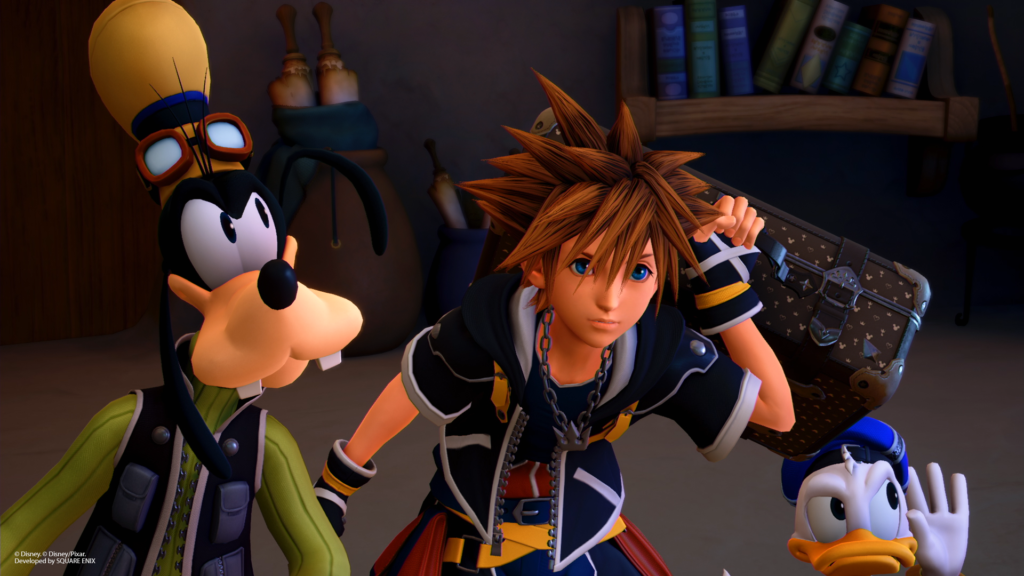 It’s impressive that the plot of Kingdom Hearts III should be so incomprehensible, given that the only thing the characters do, when they open their mouths, is attempt to advance it. If you’re a newcomer to the series, you may think, during one of the many speech-laden cut scenes, ‘I don’t know what you’re saying.’ Thankfully, the game’s hero, Sora, voices this very objection and is met with the following reply: ‘Nor should you, nor will you ever, for that matter.’ Right, I’m glad we cleared that up then.

In broad strokes, the setup is as follows: Sora, who is on the side of Mickey Mouse – here known as King Mickey, naturally – must attain the ‘power of waking’ (of which I was often equally in need) in order to defeat Xehanort, a powerful villain who seeks to reshape the world as he sees fit. To do this, Sora and his pals Goofy and Donald Duck must venture between Disney worlds, reshaping franchises as they see fit – squeezing themselves into scenes from the films and banishing scores of inky monsters, called Heartless. To do this, Sora wields a key the size of a sword – fittingly called a Keyblade.

Combat is a hack and slash affair. Well, it’s hack, anyway; the slash is unaccounted for. Beating enemies senseless is achieved, chiefly, with just the one button, and after 30-something hours, I’m concerned for the health of the X button on my PlayStation 4 controller. There is some variety, but only if you seek it out. There are spells and summons that deputise a number of characters to your cause – riding an adult Simba into battle, say, or a spot of synchronised swimming with Ariel, lending fresh meaning to the phrase ‘splash damage.’ 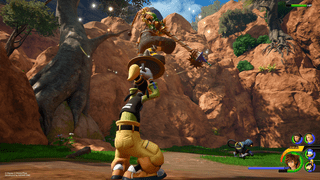 Elsewhere there is the Shotlock, which slows time and lets you charge a salvo of laser bursts, or Flowmotion, which has Sora grinding on rails, bouncing off walls, and sailing through the air as if he’s stumbled into the Tony Hawk franchise. But for all these tactics, it was often quicker and more effective to hammer away with the Keyblade; I only found myself straying from it for the sake of visual variety. And around the ten-hour mark, something remarkable happened: I died. I hadn’t realised, up to that point, the ease with which I was blundering by. I wasn’t fighting, I was fumbling with style.

The main attraction of Kingdom Hearts III is the addition of Pixar, which allows entry into a number of nostalgic provinces. There’s no denying the joy of seeing the sky blue of Andy’s bedroom wallpaper and hearing the meandering clarinet of You’ve Got a Friend in Me, by Randy Newman; or the frosted trees of Frozen’s Arendelle as Elsa sings Let it Go. But these are borrowed pleasures. The charm of Pixar is the wit buried beneath the warmth. The joys of Toy Story, Monsters, Inc., and their ilk is in discovering, years down the line, a fresh film – one wrought from writing that wafted way over your head as a child, winking at you now through the grime of adulthood.

In Kingdom Hearts, there is no such secret thrill. The wryness of writers like Brad Bird, Joss Whedon, and Andrew Stanton is absent, and the game narrative is focussed squarely on the youth of its audience, with its eyes looking downward. Only, they needn’t be. The young yearn for complexity and can sense when all is pat and potted for them. Kingdom Hearts III is overflowing with heart, and mostly unconcerned with the head; as such, it’s in dire want of wickedness.

Never mind happily ever after; it’s the darkness of Disney that most enraptures. It’s the mutilated toys of Sid, the sparse plugs of hair on a doll’s head, planted atop metal spider legs. Or the hands of Mother Gothel, the knotted knuckles shrivelling and graying as her magic spell is broken, the hood she pulls over her face, which she cannot bear to see. The reputation for schmaltz is understandable, but Disney, at its best, understands that waking is all the sweeter after the bitterest of nightmares. All Kingdom Hearts can think of is robing its baddies in black leather coats.

Also, while we’re on the subject, what’s with the fashion? Seeing so many straps, buckles, and zips is unnerving, and there is much of the fetishised about Kingdom Hearts. Each character is signalled, in lieu of personality, by their standout flourish – the pink-mulleted gentleman, the lady with two strands of stuck-up hair like antennae, the fellow with the eyepatch. These little tics and tropes end up smudged and blurred together until there are, in fact, only two characters: good and bad.

Should you tire of that eternal clash, the game is full of little distractions. Segments in the Gummi ship have you barrelling through space, taking on a Star Fox flavour. A jaunt to 100 Acre Wood offers up match-three games with Rabbit’s vegetables. And a rhythm action cooking mini game has you playing sous-chef to Remy, from Ratatouille. These are all a little prix fixe, but they provide pleasant refreshment between long courses of Keyblade.

What revitalised me most wasn’t these divertissements, though; it was the shifting art styles as I entered each new world. For one thing, it reveals the power that games have to ape what’s on the screen, to render near-perfectly the lines and curves of Pixar’s artists. It has a curiously clinical feel, once the initial buzz has worn off. In fact, the most beautiful of the worlds, to my eye, wasn’t Pixar at all; it was 100 Acre Wood. Seeing the yellowy shades of E.H. Shepard, faded like foxed paper, was more evocative than any other.

You might think it surreal seeing Sora and his gang bound into other genres and franchises. But Disney, too, has a tradition of transformation – of puckishly tipping its hat. Consider The Mad Doctor, a Disney short from 1933, which sees the mouse transposed into a pastiche of the 1931 Frankenstein, strapped to a metal table amidst crackling Tesla coils. Or Gulliver Mickey – swiped from Swift’s Gulliver’s Travels – where he is tethered to the ground by an army of tiny people, only to break free. The mouse has always refused to be pinned down.

Rather like the narrative of Square Enix’s series, which, after eight main games across handheld and home consoles, resembles a hedge maze. The notion that Kingdom Hearts 3 is, to the uninitiated, some cultural edifice that cannot be critiqued is amusing. It’s akin to arguing that one isn’t fit to assess Star Wars: Episode I – The Phantom Menace without an intimate knowledge of trade route taxation and senate politics. (Admittedly, in the case of Episode I, those things would certainly help.) Plot will only get you so far; real character and content have to take up the baton, or else you wind up babbling, like a zealot, about Xemnas, Xigbar, and Xehanort.

Though it all, I was most happy when Woody was by my side. Ever the voice to shatter pretension, he famously reminded Buzz Lightyear that he was, despite the anima pulsing through his plastic, a plaything. During one sequence when Buzz acts strangely, possessed by shadowy powers, another black-clad bore pontificates on the nature of hearts and darkness. Woody fires a bracing shot above the noise, ‘Whatever you’re talking about, I don’t care. Put Buzz back the way he was, then get lost!’ You said it, partner.

Available on: PlayStation 4 (reviewed on), Xbox One

[…] open on Sora, who’s now in the Quadratum, described as a large expansive city introduced in the last game. That game introduced the city as a world not of light and dark, and seems to be based more on our […]

[…] According to them, it claims, the full release will be on the newer engine. As a result “the quality of lighting and detail will be several levels higher” than that we saw in the trailer. The report also claims that the studio behind the game will be Square Enix’s Osaka one, which was behind 2019’s Kingdom Hearts III. […]