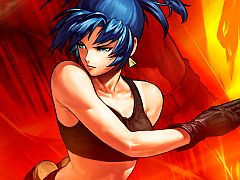 What is King of Fighters? It’s a valid question. The long-running 2D fighting game series, which began a whopping 15 years ago with the release of King of Fighters ’94 for the Neo Geo, has never enjoyed the global popularity of Street Fighter, Tekken or Soul Calibur. It was originally conceived as a coming together of the most popular characters from SNK’s Fatal Fury (yay!) and Art of Fighting games, among others. Fatal Fury’s Bogard brothers and Japanese Muay Thai mentalist Joe Higashi, along with Ryu rip-off Ryo Sakazaki and Robert Garcia from Art of Fighting, combined with a couple of new characters to form one of the strongest fighting game line-ups of the time. Cocky high school student Kyo Kusanagi, designed to be the series’ poster boy, is one of the most popular video game characters in Japan.

KOF ’94’s fighting game system is a relatively simple affair that has remained the same, at least on a basic level, with every subsequent release. It’s standard 2D stuff, with back and down back used for blocking, and up and its variants used for jumping. Four attack buttons are used: light punch, light kick, strong punch and strong kick. Special moves are reminiscent of Street Fighter II. Quarter circle and half circle stick movements with punches and kicks usually make something happen, as do traditional back forward/down up charge motions. There’s a power gauge at the bottom of the screen, which, when maxed, can be used to power a super special move. So far so very fighting game.

Where KOFXII, and indeed the series as a whole, differs is with its three versus three matches. You can’t play the game any other way. You have to pick three characters to fight with in elimination-based rounds. Unlike games like Marvel vs. Capcom 2, you can’t switch characters whenever you want, so the order of your team is of some strategic importance. When one is knocked out, the round ends. The victor gets a bit of life back and round two starts with the next character. This repeats until one player’s entire team is eliminated. It’s a cool, fun, simple to grasp system that worked in 1994 and works now.

15 years on, KOF retains a loyal, hardcore following predominantly fuelled by a burgeoning tournament scene. But on home consoles the series has endured a somewhat barren spell. The last game, KOF11, was released in Europe in October 2007 for the PS2 and didn’t exactly set the world on fire. Perhaps because of that, KOFXII has enjoyed a surprising amount of scrutiny during its development, no doubt fuelled by the “rebirth” tagline. Fans have been watching. The pressure was on.

The first thing fans will notice is the redrawn art. Unlike the 2.5D Street Fighter IV, SNK Playmore’s decided to go for a distinctly retro look and feel, retaining an old school 2D anime-inspired art style. Each of the 20 character sprites has been painstakingly hand drawn down to the last pixel. The end result is a game with wonderfully detailed animations.

The backgrounds, too, stand out. Every stage is as striking as a pack of Starburst and as detailed as a da Vinci, but some of them are, frankly, borderline racist. One in particular, a blood red Egypt stage filled with hundreds of worshipping silhouettes bowing outside a temple, is a racial stereotype that should never have made the cut.

The main issue on the presentation front, however, is that there’s a general lack of oomph. The super special moves, for example, are particularly underwhelming. Worst of all, though, is the heavy pixelation, which is particularly odd given the animations are so gorgeous. This may well be a deliberate move, but it gives the game a somewhat tired, outdated look, probably the direct opposite of what SNK wanted. There is an option to turn on varying levels of sprite filtering, which do help smooth out the jaggies, but it doesn’t get around the fact that the game doesn’t live up to its cartoon quality promise.

This will be particularly disappointing for fans because it feels as if the development team prioritised redrawing the art over everything else. The menus are bland, the music is awful, and the female Japanese announcer is an annoying twit. A bare-bones feel courses throughout the entire experience. The single-player offering, which admittedly isn’t the point with fighting games, includes nothing more than a time attack-based arcade mode and a versus mode. There’s no survival mode, no story AT ALL, no customisation and no bonus modes. Put simply, KOFXII’s like a starving dog chewing on a bone long since stripped of its meat.

What KOF12 has got going for it is the fighting engine, which is superbly responsive and tight. And, arguably, the additions and tweaks SNK Playmore’s made to it are more important than the redrawn art or feature set. Chief among these is the Critical Counter move, which acts a little bit like SFIV’s Focus Attack. When your Critical Counter Gauge, set underneath your life bar, is filled, you can Critical Counter if you counter-attack with a strong punch or kick at close range with the stick in neutral position. This temporarily immobilises your opponent, setting you up for a barrage of attacks that can be strung together and finished with any special mode. Or, you can simply use the opportunity to guarantee connection with your super. The choice is yours.

Landing a Critical Counter is particularly satisfying. The camera zooms in, the action pauses for a second so you can see your opponent’s face contort, and the meaty sound effect makes you wince. It’s something that immediately affects the dynamic of a match. As soon as your Critical Counter Gauge shows max, your opponent will employ keep-away tactics, and you’ll be desperate to sucker them into a counter. It’s a nice change up from the otherwise frenetic action.

Unfortunately KOFXII suffers somewhat in the online space. While you can find playable matches, most are riddled by lag. This is a bitter disappointment – home console fighting games are, in this day and age, popular in part because online features mean the old school one on one arcade experience can be transported into the home. Unfortunately, for whatever reason, playing KOFXII online isn’t as good as it should be. Perhaps future patches will address this situation, but at the time of writing it can’t be ignored.

KOFXII’s biggest problem is that the fighting game bar has been raised considerably in the last 12 months, with the release of Street Fighter IV in particular showing how reboots should be done. The single-player features won’t keep anyone’s attention for more than half an hour, and the ropey online only exacerbates this problem. The new redrawn art style’s full of beautiful animations, but the pixels ruin it somewhat. The Critical Counter system is great, but some will say it’s not enough of an addition to justify the “rebirth” tagline. In the 90s, KOFXII would have been hailed as a brilliant fighting game. In 2009, in the post Street Fighter IV world, however, it has to go down as a disappointment that won’t be of interest to anyone except the most loyal KOF fan.

In the 90s, KOFXII would have been hailed as a brilliant fighting game. In 2009, in the post Street Fighter IV world, however, it has to go down as a disappointment.
6 Critical Counter satisfying Gorgeous animations Ropey online Bare bones feature set