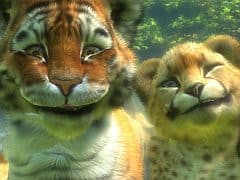 “Is it better than Nintendogs?” I asked my 10-year-old sister after a session playing Kinectimals. “Yes,” she replied, completely unaware of the importance of what I was asking her. To be fair, she’s likely to say most new things are better than something she’s had for a long time, and it was a bit of a leading question, but it’s a clear indication that Microsoft and Frontier are on to a winner with this pet cat simulator for Kinect. Adults are likely to find the cutesy felines and twee mini-games too much to take in anything more than short bursts, but kids will find this to be the most inviting of all Kinect’s launch titles.

The set up is very simple. You arrive on an island and are greeted by an adorable selection of wild felines (lion, tiger, panther, cheetah and leopard) and talking guide Bumble – a flying fairy-like creature. You pick your cat, name it (by actually using your voice) and then work your way around the island, discovering new parts, playing games and teaching your cat tricks. You can’t walk around the island like you would in an adventure game like Oblivion, but the game transports you to new places via your map.

Tricks and mini-games are the heart of what makes Kinectimals such a fun game for younger gamers. There’s no getting away from the fact that spinning on the spot to make your cat do the same will raise a smile, and the animations and facial expressions of your feline chums are never anything but hilarious. The Play Dead expression is brilliant, and the way they spin on the spot while sitting is incredibly cute. Response to your actions is generally excellent, both in terms of recognising tricks from body movements and voice commands.

Mini-games range from throwing balls at targets (and for your cat to fetch) and driving around an RC car, to playing keepy-uppy with a football (your cat acrobatically returning the ball each time) and throwing bananas into the mouths of stone monkeys. Aside from the RC car, controlled with a virtual wheel like in Joyride, all of these work very well and are an excellent showcase for Kinect.

You can feed, water and dress your cat too, and when they get a bit dirty it’s time to give them a clean. It’s all handled very well and the user interface is user friendly – helped by Bumble who is always on hand to give you helpful hints and tips. New items can be bought from the in-game shop using points earned in the game, while hidden treasure, dug up around the island, is put on display in your house.

Your cat won’t always be the love of your life – once you’ve exhausted the mini-games and performed enough tricks to perform at Cat Crufts (yes, I know that doesn’t exist, but you get the point) – but you’ll get a lot of enjoyment before you get to that point. Kinectimals is also one of the only Kinect launch titles that is made primarily for solo play. Sure, you are able to switch players in and out, giving everyone a go at the mini-games, but it’s essentially a single-player experience.

Kids games generally don’t get treated with much respect, shovelled out the door as quickly as possible, but Kinectimals looks and feels like a lot of care went into it. It’s not as visually brilliant as the best 360 games, but the cats are modelled excellently and purr with personality. The island is bright and colourful and Bumble has the kind of voice the kids love but adults find grating after two minutes. There’s certainly enough here to interest mature gamers, but if you fall into that group Kinectimals is more of a novelty than a lasting experience.

Kinectimals is a dumb name, clearly devised to try and capitalise on the success of Nintendogs, but that’s a misstep that’s easy to forgive. For the game’s target audience – pre-teen kids – this is an excellent Kinect game that will provide hours of fun. It’s unlikely to have the same impact as the aforementioned DS classic, but if you’re after a game for the kids alongside your Kinect then this is the best out there.

For the game's target audience - pre-teen kids - this is an excellent Kinect game that will provide hours of fun.
8 Fun to play alone Excellent use of Kinect Cute visuals Will be short-lived