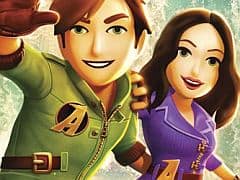 Ignore the box. Kinect Adventures’ cover might mention something about it containing 20 games, but in reality it’s five. The conceit is that you’re part of an adventuring team who have been exploring the world since the 1920s in order to find rare statues, so this is the intended carrot on a stick embedded in a series of mini-games. After completing each of the five games across the four zones – hence the purported 20 – you’re awarded one of these “living” statues, essentially character models that mould to a scan of your body.

For about 10 seconds you’re able to record yourself dancing about as a gopher or a yeti, in what’s basically a metaphor for the rest of the game. It’s short, it’s vaguely funny, and the novelty of wearing an animal and making it sing is alive and well. But a novelty in a yeti outfit is still a novelty, and by level two you’ll realise you’ve already sampled everything the game has to offer.

Rally Ball, River Rush, Reflex Ridge, 20,000 Leaks, and Space Pop are the five games that get replayed through each level, albeit at a slightly higher difficulty.

Rally Ball places you in a room of crates. Your weapon of choice? A rubber ball. Swing your arm to hit it, and it will ricochet around the room before knocking a specialty crate that’ll spill out more rubber balls. They all bounce back to you, and you’ve got to hit back as many as you can to take out the remaining crates. Task successful? Move on to 20,000 Leaks.

You pop bubbles. Walk back and forward, or flap your arms to hover in the air and pop bubbles with your body. Task successful? Move on to River Rush.

Which, to be fair, is quite good: A basic lean-and-jump mini-game that puts you in a raft and has you collecting coins along the way. Simple gameplay, but it does what you ask it to. Jump up and the raft shoots upward to collect a coin, jump again and the raft will shoot even higher. Where the other mini-games tread dangerously close to the territory of poor phone app design, River Rush is one of the most physical offerings Adventure has. If 3 out of 5 Adventures only require you to make basic gestures, then River Rush is one of the most physical games by comparison, inviting you to decide what routes to take to score the most points, when to jump, and when to ride off of platforms to hit coins sitting on clouds.

And you could call Reflex Ridge its equal in that case; a kind of Total Wipeout-style obstacle course where legitimate movement is required. Squat to avoid horizontal posts, side-step to avoid vertical posts, jump to speed up. It’s simple but fast-paced, which fulfils the quota of necessary attributes in mini-games.

Kinect Adventures’ set of five games was never designed to innovate, but it clearly fails to do the bare minimum that is necessary for mini-games to have a purpose. Mini-games are fun in small, pint-sized, easy-to-play quantities, and while Adventure succeeds in offering pocket-size entertainment the gameplay is nowhere near interesting enough and fails to capitalise on the novelty of Kinect. Movement is key to these games, and in this game it’s limited.

While Adventure succeeds in offering pocket-size entertainment the gameplay is nowhere near interesting enough and fails to capitalise on the novelty of Kinect.
6 River Raft and Reflex Ridge mini-game is alright Too short Repetitive Fairly dull