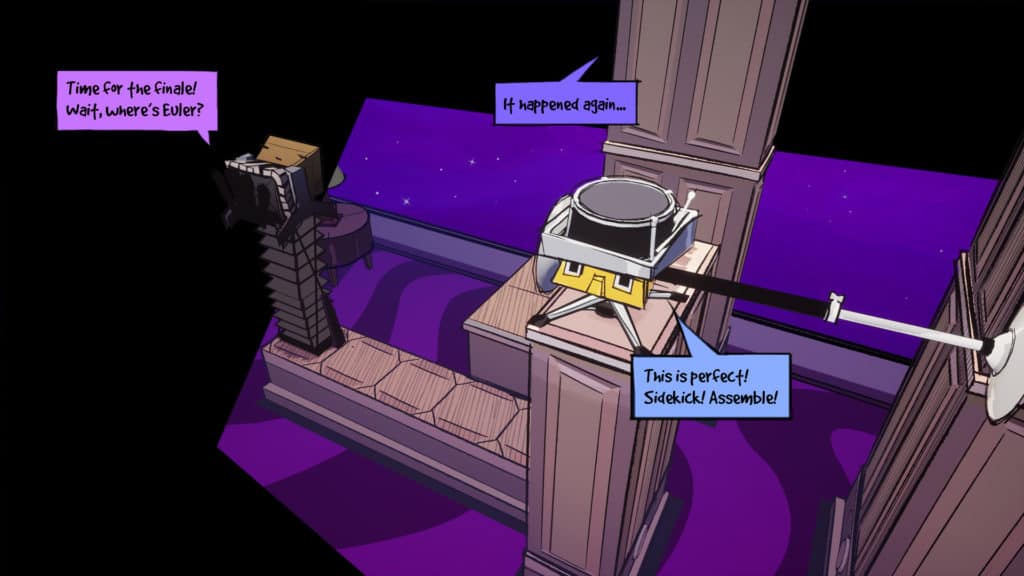 Kine is a tricky musical puzzle game. At first, it may look simple, and the first few levels are, as you push three robot instruments up and over cel-shaded cardboard stages. But it is hardly one-note, as each level has its own unique theme and story, and the game becomes more complex as more mechanics are folded in. It’s an incredibly impressive orchestration of challenge and charm made by just one developer, Gwen Frey. If you’ve got a passion for puzzles, it’s a rewarding and wonderful game. If, however, you’re looking to follow a story all the way through, it feels a little fragmented.

The levels of Kine are aesthetically pleasing and satisfying to spin. Towers and grids of boxes, chairs, and filing cabinets pop up and fold away, as the camera spins and the player works out which angle works best for solving the puzzle. The characters are named Quat, Roo, and Euler: robot instruments who are passionate about starting a band and making it big. Quat is a drum and has a swagger communicated through comic-book style bubbles, which pop up as they travel around the environments. He meets up with Roo the accordion, who is chirpy and optimistic. Finally, the player will encounter Euler, an anxious trombone who needs a little more convincing before he steps into the limelight. 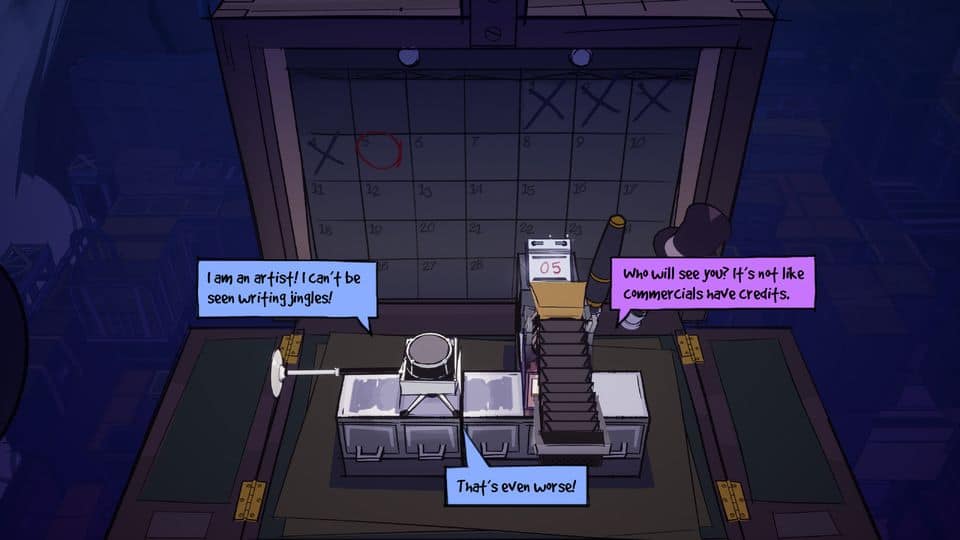 Each of these characters forms different shapes and has different levels of mobility and complexity. To move onto the next section, you need to collect a sheet of music, located somewhere on the gridded level, with one of the instruments. Quat looks like a snare drum, and he can roll forwards, backwards, and side to side, as well as extend the cymbal pole to travel and reach further than a one-square roll. Roo will stretch or compress the bellows to move and jump a few squares ahead, and, as a trombone, Euler can slide in two different directions and roll, so long as the slides won’t collide with obstacles.

In some cases, Kine will hand over two or more of its robot virtuosos to control at any one time, and it becomes a single-player co-op game, as the player aligns each character to help reach those sheets of music that, to them, may as well be gold dust. Quat, Roo, and Euler will bob along to the beat and chatter with each other, sharing their dreams of stardom. The story refreshed my memories of Pixar’s WALL·E, as these little automatons knew there was something bigger and better out there for them. One secondary level has Quat and Roo take up an office job, just to keep things ticking along, though their big break is on the horizon. This tiny space had the two pushing a box of paper about thirty times in a row and hitting a calendar instead of a sheet of music. 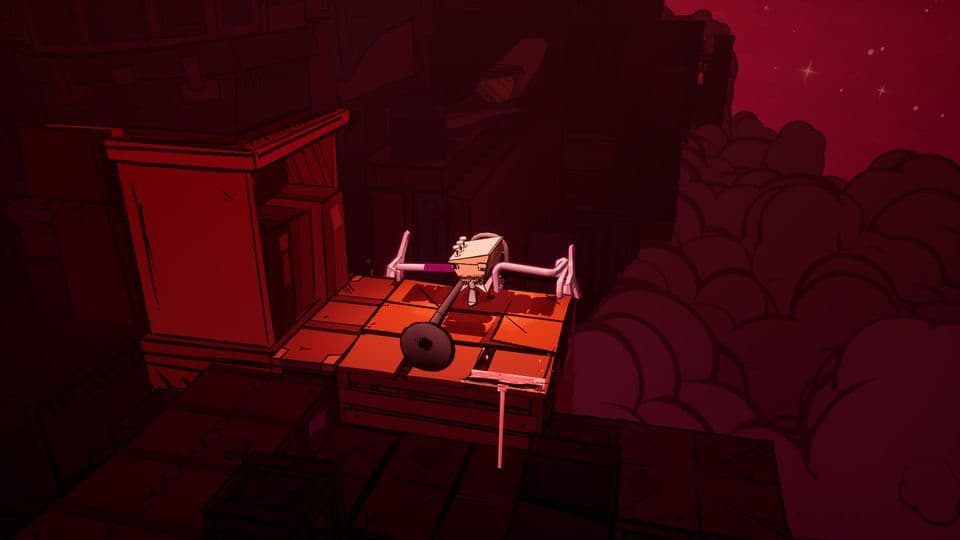 The story, setting, and its characters are charming, engaging, and imaginative. I just wish the puzzles were easier so that I could give this section of the game equal attention and dedication. Although the characters have their own unique mechanics, I didn’t feel like I was learning anything. The sheet of music fluttered playfully just out of reach and I rolled and stretched and swapped and swayed to no avail. Puzzle solving became a symphony of staccato clicks and clacks and I kind of… forgot what this was all for. I fixated on the sheets of music and felt that the puzzles became too difficult, too quickly. This drowned out the captivating storyline and characters, and devalued it into a traversal of point A to point B. When I did finally land on the sheet of music, it was less of a ‘Eureka!’ moment and more of a ‘oh… ok’ mumble to myself.

This project is amazingly realised and I’m floored that the mechanical polish and quirky aesthetics are the result of the sharp, concentrated focus of just one creator. And I liked the ability to reverse your moves when I realised I’d gotten stuck or I wanted to try a different turn to see if that worked. Kine would have benefitted from incrementally increasing the difficulty as its story progressed, but I understand that would have depreciated the developer’s vision. 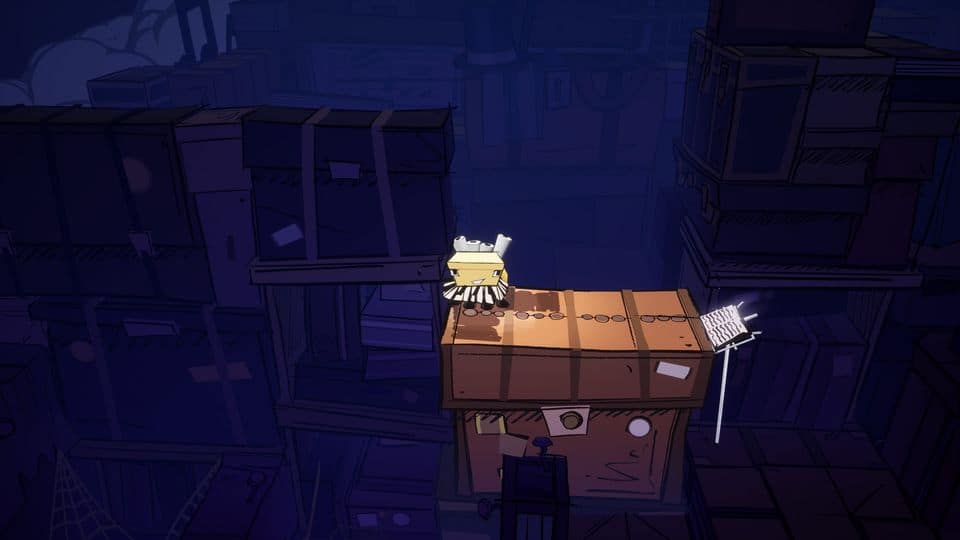 Above all, Kine is a puzzle game. It’s a puzzle game about breaking into the music industry and working hard to earn your dreams, with no certainty of success. Kine sprinkles chirpiness and charm in with the challenge, and I like the ideas it brings to the fore by using robotic instruments who must fit in to the world around them. But instead of feeling empowered and excited, I felt like I was stuck in music lessons in primary school, boggled by the black and white hieroglyphs and tapping keys disjointedly until I hit the right one.

If you’ve got a mind for puzzles, Kine is great. If you’re into the narrative, Kine might make you feel like an afterthought.
7 Adorable characters Impressive from a one-person team Undo button is helpful Difficulty level is alienating