A wall ahead of you has some nonsensical text written on it. A rather freaky bystander informs you that the text isn’t exactly as it seems; some of it is written in blood. He also tells you that the girl can tell what is written in blood and what isn’t. An obvious puzzle, but the way it is solved is anything but ordinary. You switch to the young woman and perform her rather special ability. Some people can juggle, some can draw, and young Kaede can slit her own wrist and spray blood all over the place. It’s not the gift you would want when natural abilities are being handed out, but it does the trick here. The true message is revealed and you can continue with your deranged quest. Killer 7 is about the most adult game I have ever played and something I won’t forget in a long time.

Trying to explain the game in a review isn’t easy. There has never been a game like this and (unless the game’s sales warrant a sequel) there probably won’t be another. The story of the Killer 7, a group of seven trained killers, and a group of freakish monsters (Heaven Smile’s operatives) isn’t what you typically see in a videogame. There’s also a political struggle going on between the United States and Japan. Trying to put it into words while still seeming sane would take the most gifted of writers. I think it’ll suffice to say that the game is seriously messed up.

The Killer 7 are each very unique, with characters ranging from a slightly outlandishly dressed thief to the wheelchair bound leader of the group, Harman. Then there is the so called ‘cleaner’, Garcian Smith, a man who dresses in a smart white suit and is used to recover dead members of the Killer 7. A chalk outline marks the spot, and a small, bloody brown bag sits there, containing what I can only assume to be the head of the fallen killer. Garcian can return these heads to Harman’s Room where these dead members can be revived. The Killer 7 may just be in old man Harman’s head, but that is one of the most intriguing parts of the story, and certainly not something we should talk about here.

It sounds strange and it is. Harman’s Room is a safe place that is located at various points around each level. In Harman’s Room (so called because Harman sits in there, slutty girl by his side) you can use a TV to perform various tasks. By Killing Smile operatives in one hit you gain thick blood. This thick blood can be turned into a serum by a machine located in one of the channels on the TV. The serum can then be used to upgrade the abilities of the Killer 7 and give them new combat abilities – essential for later levels. When starting each level, not all of the Killer 7 are awake, with their stations on the TV being a bit fuzzy. After killing a number of enemies you can wake them up, giving you access to them from that point on in the level.

Killer 7’s gameplay is actually the weakest part of the game. While the game might look like a typical shooter, and it is in some ways, it isn’t in a lot of others. Most importantly, you can only ever move forwards. Imagine a series of thin lines drawn around the 3D world that you must move along. There is no free movement, with junctions navigated by a simple to use on-screen direction system. You can backtrack, but you must first turn around and then continue to walk forwards. With freedom being a key aspect to most modern games, it takes some time to get used to the restraints that the game forces you to play within.

Combat is equally restrained. Bringing up your sight and switching to a first-person view will root you to the spot (much like in Resident Evil 4). From here you must take out any enemies that are bearing down on you. This is easier said than done. These enemies, the Heaven Smile operatives, can only be seen once you scan the area (although they make their presence known by letting out a horrific shrieking laugh), turning their ghostly appearance into a solid and pretty terrifying sight. Throughout the game you’ll encounter a fairly large number of different Smiles, each one having a weak-point. These areas are highlighted by a yellow circle, and hitting this area will instantly kill them, giving you some much needed blood. Most Smiles (not all) can also be taken out by repeatedly shooting them, but to survive you’ll have to get good at hitting the weak-spots.

It feels very much like a choose-your-own-path lightgun game, but without a lightgun. The weak-spots are pretty damn hard to hit, especially on the PlayStation 2 version of the game, where the fairly inconsistent framerate and loose controls don’t help when you are tying to target a tiny circle on a moving target. The fact that the game forces you to aim using the left analogue stick will also annoy anyone who has only ever used the right analogue stick to aim.

Yet, for some reason, combat becomes quite rewarding, with successful one hit kills bringing a sense of achievement that few games offer. You’ll learn to use certain members of the Killer 7 to take on certain Smiles, and as you move into the second half of the game you genuinely feel like you have the upper hand over the enemy. Then the annoyance factor kicks in again, with one hit deaths happening far too frequently and a number of cheap in-your-face Smiles taking you out before you have chance to draw your weapon.

Dying isn’t really a problem, as Garcian can retrieve the dead, but the process of collecting and reviving the dead becomes pretty tiresome, especially when the trek to the brown bag is a lengthy one, peppered with Smiles. Garcian will start his clean-up mission from the last Harman’s Room you entered and this is where you’ll be returned once you retrieve the brown bag. If Garcian dies though, it’s game over, and with actual saves points only in approximately one in every two Harman’s Rooms, dying isn’t something that you want to happen.

As with the Resident Evil games, there are a lot of puzzles that must be solved in order to progress in the game. These puzzles generally require you to be a certain character and then perform that character’s special ability. The most commonly used are Coyote’s lock picking and jumping, and Mask’s strength and powerful gun-fire. Objects will need to be stuck into strange shaped holes and rings (the kind you wear on your finger) need to be collected so you can use their special powers. It’s all pretty simple stuff; at least it is when you’re playing on the normal difficulty mode. In this mode the game’s map (which does a useless job of telling you where you are) shows pictures of the required characters next to each puzzle area. Playing on hard mode removes these pictures, making the game far more challenging.

Most levels require you to collect a number of Bullets that can be given to the Gatekeeper, allowing you access to the level’s boss. Boss fights are rarely challenging, with most of their weaknesses being painfully obvious. The new Heaven Smile operative that is introduced prior to each fight usually causes far more trouble. There’s the odd memorable fight, but given that you find yourself in a fair bit of trouble throughout each level, the climactic battles are a little underwhelming.

The most striking aspect to Killer 7 is the wonderful visual style. The game uses single colours to paint most objects and there is a heavy amount of shadow work to give detail to characters. Environments and characters are rather angular in appearance, with lots of straight edges that gives the game a very clean look. The closest comparison is Jet Set Radio Future, but even that doesn’t have as strong a sense of style as seen in Killer 7.

While the striking visuals are the standout feature of the game, after a while you’ll begin to appreciate the brilliant soundtrack that accompanies the action. Each area has its own unique sound, with the Gatekeeper sections being home to some of the best game music I’ve ever heard. Vocal work is also superb, both during the game and in the cutscenes (strangely using a mixture of the game engine and Japanese Anime). Each character will shout out their own unique phrase when successfully taking out an enemy in one shot, and the various NPCs that you frequently encounter all speak with bizarre, yet wonderful voices. Some of whom speak such inane gibberish that you can’t help but laugh.

It’s hard to know what to say about Killer 7. On the one hand it’s a poorly designed on-rails shooter that thrives on making combat infuriating. On the other hand it’s a wonderfully obscure, often insane, adult themed survival horror game that just begs to be played. Luckily for me, the game’s off-the-wall story and totally insane premise won over the severely flawed controls. I can’t say for sure if everyone will feel the same, but it’s worth taking a gamble, in the hope that you may enjoy one of the most unique games ever made.

I can't say for sure if everyone will like Killer 7, but it's worth taking a gamble, in the hope that you may enjoy one of the most unique games ever made.
7 Intriguing story Awesome soundtrack Awkward controls Tricky combat 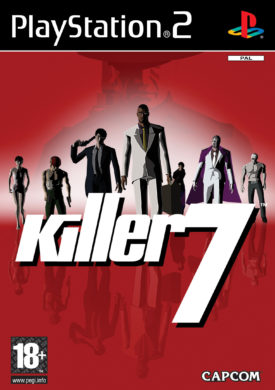 A stylish cel shaded game that seems to defy categorization.

A stylish cel shaded game that seems to defy categorization.