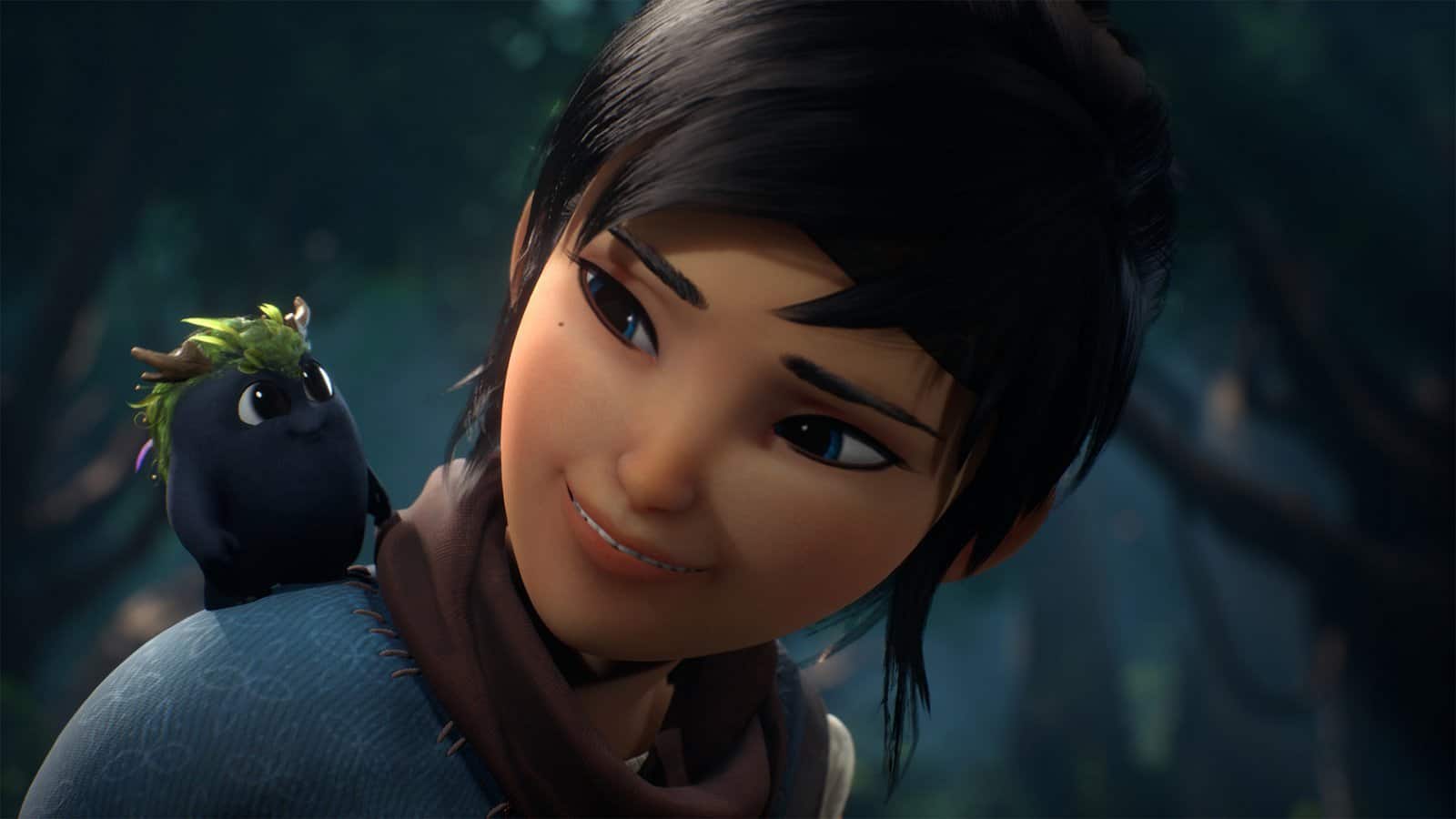 If you are a restless spirit, hanging around the earthly plane and lamenting the passage of time, you may run into Kena. She is a spirit guide, a cross between a counsellor and a sanitation worker; she cleans up ghosts as though they were spillages, but she does so with a consoling word and a solid plan of action. Think of her as an afterlife coach. The tools of her trade are a staff—forged, by the looks of it, from the gnarled boughs of a tree, with a blue gem wedged into one end—and a platoon of dark, bug-eyed helpers, called Rot. At her casual command, they move boxes and lift obstacles, and even lend a hand in combat, swarming Kena’s enemies like a flock of overly cute crows. Bad news, if you are one of the wraiths who refuse to move on.

Now for the good news. If you are a restless player, hanging around the digital plane and lamenting the passage of time, you may run into Kena: Bridge of Spirits. The game is a bridge, of sorts, a cross between past and present; and the developer, Ember Lab, has a solid plan of action: to console the spirits of those who dearly miss the early-millennium platformers of the PlayStation 2. If you thrilled to the likes of Beyond Good & Evil, whose heroine, Jade, also swung a staff, and to Jak and Daxter: The Precursor Legacy, with its lush environments of jungle and its corruptive pools of “Dark Eco,” you will find comfort here. Whether you demand more than comfort from your games will inform the way you see Kena: Bridge of Spirits; is it merely a graphically sumptuous example of design that you wish we would leave behind, or is it a vivifying tribute to a rich precursor legacy?

On consoles, the game arrives exclusively on PlayStation (on both generations of hardware) and, in its own way, exemplifies one of Sony’s most cherished principles, which is that, if it isn’t broken, one should spend as much money as possible not fixing it. Hence games such as Ghost of Tsushima and Horizon Zero Dawn, glittering blockbusters with singular visual styles, planted in that most people-pleasing of genres: the open world. But what about Kena’s adventure, which harks back to a formula that, while perhaps not broken, was certainly beginning to creak? We might look to Ratchet & Clank: Rift Apart, for a lesson in keeping things fresh. It was the latest in a series that began on the PlayStation 2, but its action was encrusted with wondrous gadgets—none more so than the PlayStation 5, whose adaptive triggers and haptic feedback massaged simple mechanics into something more, widening the rift between then and now. 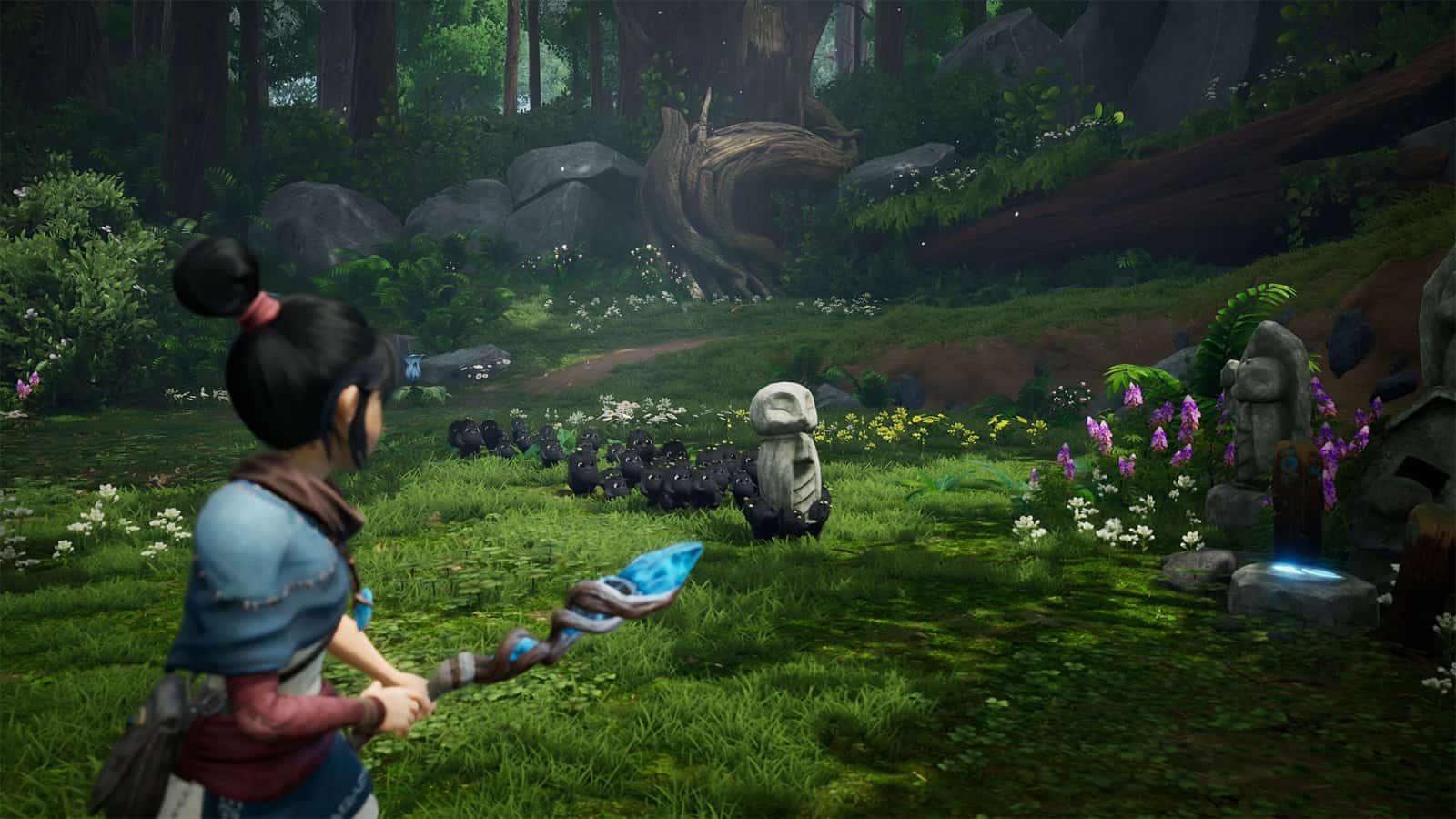 Kena, on the PS5, has one really good trick. Her staff bends into a bow, and the bowstring, when pulled back, causes a leathery tremble in the controller. Other than this, however, her quest could, if you scrape off the enamelling of its graphics, sit comfortably beside its older inspirations. Her clashes involve simple four-hit combos and charged-up power-swings; there is a nice parry, with a punishingly narrow timing window; and the puzzles, all entailing the lighting of beacons and crystals, require no great brain power—only that you pay mild attention to your surroundings.

Fortunately, paying mild attention to your surroundings is one of the game’s great pleasures. Kena looks as if she could be patched straight into a Pixar movie, and the world around her is dense with carefully drawn detail. One forest stretches so bewilderingly upwards that we can’t make out any branches; all we get are thick pillars of brown, piercing a layer of computer-grown cloud. There is something charming in its unreality, a willingness not to simulate the world but to lavish it with the exaggerated praise of a cartoon. Until now, Ember Lab has solely been an animation studio, comprising fourteen core developers. In 2016, it produced a short film, entitled “Terrible Fate,” based on The Legend of Zelda: Majora’s Mask. It took one of Nintendo’s darkest games and cranked up the shadows, honouring its lunar mix of the mad and the deeply sad.

It was no surprise, then, in Kena: Bridge of Spirits, to find a collection of slightly creepy masks—each belonging to a lost soul and, when gazed through, yielding memories, clinging to the environment like firmware. Nor was it a shock when, in several of the game’s tough boss encounters, the landscape was fouled into a corpse-coloured waste, under infuriated skies. How’s that for Dark Eco? No wonder we have the Rot, to counterbalance this pinched, PEGI 12 air. These globular little imps love nothing more than to grin moonily into the camera, emitting gurgling chirrups; and the acreage of their heads, sprouting grass and fungi, can be customised with collectible hats. Furthermore, should you wish to thoroughly caramelise the tone, Kena will sit, cross-legged, and indulge her followers, like a primary school teacher during story time, and at the touch of a button they will caper, or kiss her on the cheek. 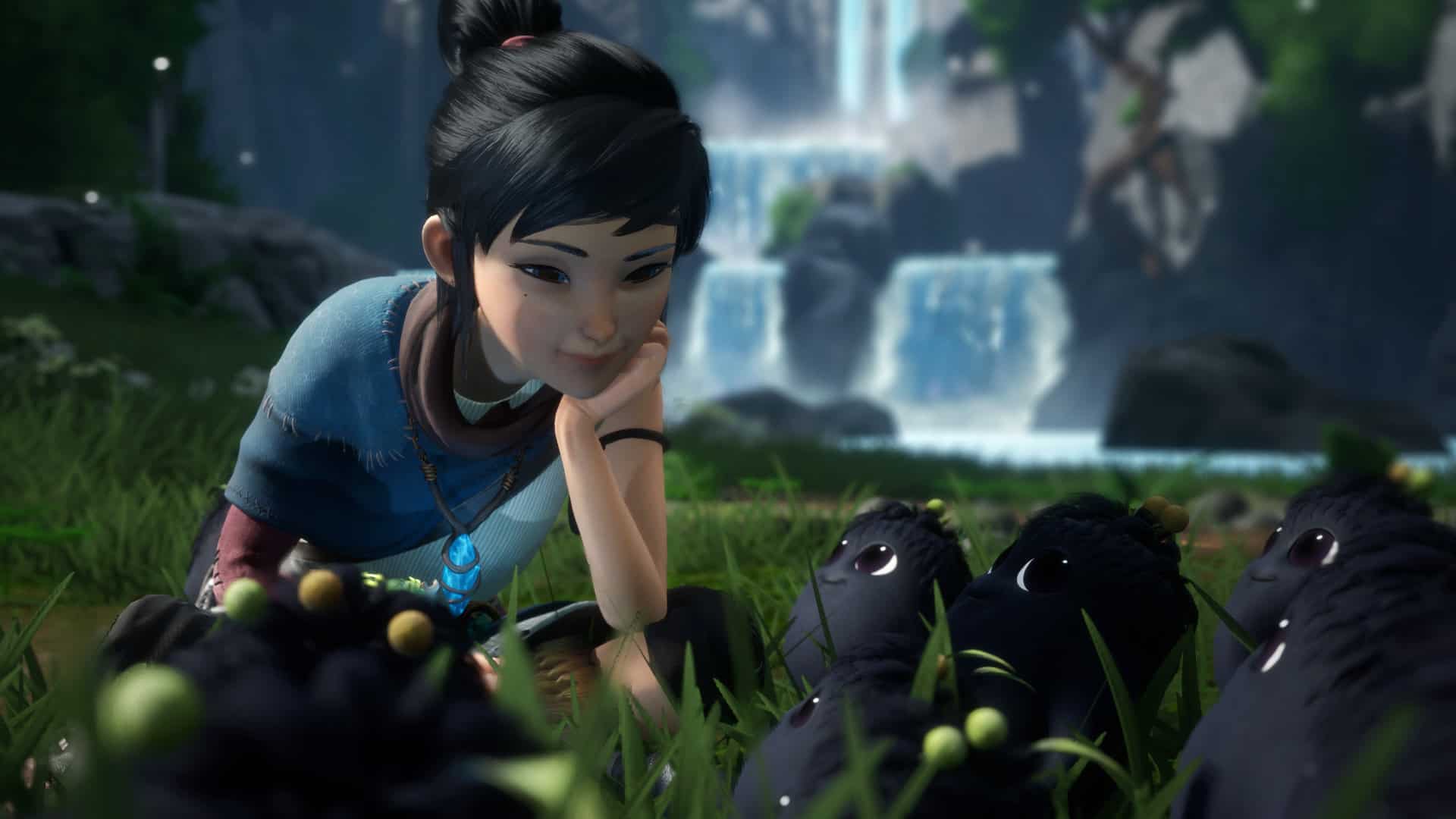 A debt is owed, of course, to Pikmin, whose title referred to the polychrome creatures that loyally served its hero, like a gaggle of plant-based butlers. Though its ambience, and, from what I can tell, its mythology is more in line with Ori and the Blind Forest. The threat in that game sprang from a vague sense that some corners of its greenery had, like the lawn of an inconsiderate neighbour, become engloomed and unruly, infested with pests. Likewise, Kena: Bridge of Spirits abounds with conversations about “energy” and “balance,” but I would struggle to recount the story line for you. Or even the principal villain. Later on, I was introduced to a couple of vast animals, wrought from living rock, who seemed possibly to present the key to it all; but, as was the case with Ori, I found that, amid all the emotion, I didn’t much care to try and pin down a secure plot, and risk losing sight of the mood for the trees.

This is where Kena: Bridge of Spirits scores. Ember Lab have stoked the game into a glow, and it retains from the studio’s tribute to Majora’s Mask the feeling not of innovation, but of the burnishing of something old and beloved. A terrible fate? Hardly. Bring on the sequel, I say. Maybe then the developers, with Kena’s help, can move on to what lies beyond.

Whether you demand more than comfort from your games will inform the way you see Kena: Bridge of Spirits; is it merely a graphically sumptuous example of design that you wish we would leave behind, or is it a vivifying tribute to a rich precursor legacy?
7 Animation + atmosphere Underlying design Underlying design