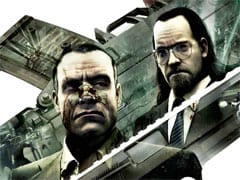 As the Eidos publicity machine readied itself to push its new shooter, the two lead characters that emerged as the stars of IO Entertainment’s gruesome crime caper presented themselves as some of the most irreverent in gaming’s history. The pair that make up Kane & Lynch may sound like a duo from a buddy movie where two rule-bending cops save the day, but they are in fact deeply disturbed convicts, broken out of prison by balaclava-clad henchmen, so they may repay a debt to a mysterious crime organisation.

You assume the role of Kane; a monstrous killer with a good man trapped inside of him, who has had his wife and child kidnapped while he is serving time, meaning he must jump to the fiddle of a group called The Seven, who will destroy the remnants of his family life without blinking. Kane is consumed by rage and sadness, but has a touch of Max Payne about him. He has almost nothing to lose, and will stop at nothing to get to his wife and daughter, and it’s hard not to warm to him even though he is a dangerous killer.

Lynch is your side kick; a violent maniac who’s psychological profile would likely read like there had been a serious administrative error in a psychiatrist’s filing cabinet. Imagine if you will some randomly mixed pages from the medical case notes of American Pyscho’s Patrick Bateman and a chronically unhygienic trainspotter, and you’ll be somewhere near to understanding what Lynch is like.

He is prone to attacks of intense hallucinations, that usually stir him into a trigger-happy frenzy where innocent bystanders are fair game, and is sent to watch over you as you struggle to return a mysterious bounty to The Seven. With such intriguing and powerful characters it’s easy to get swept in by Kane & Lynch: Dead Men, but after several hours of play, it is going to be the gameplay that really matters.

In that regard, Dead Men is of mixed success. There are some neat ideas throughout, and it’s undeniably a brilliant game for much of its campaign mode, and includes a fantastic multiplayer element, but compared to the recent slickness of Call of Duty 4 and Halo 3, Kane & Lynch has an uncomfortable lack of grace about it. In trying to be a run-and-gun shooter at the same time as placing emphasis on staying out of the open and shooting from cover, it occasionally makes for an awkward mix.

There are times when the best technique is to charge head on with scant regard for accurate aiming, fighting with fists and shooting from the hip. Then, a moment later you’re expected to work your way forward methodically, picking enemies off from quite a distance. While variety is desperately needed in most shooters, here it is too sporadic, and often hopping between the two is rather confusing. There’s also the fact that the targeting reticule blends into the background with infuriating ease, and the tendency of weapons to spread their ammunitions means while they are great for close exchanges of fire, missions with an emphasis on ranged shooting can be incredibly annoying.

However, for every time you’re cursing the game for expecting you to snipe a gangster in a white suit against a white background with a tiny white crosshair with a gun that seems to fire curved shots, you know you’re just round the corner from a superb set piece. Take for example the club scene, which initially seems like little more than an elaborate way of showing of the graphical abilities of the Xbox 360, as you pick your way through a throng of people to meet with an old acquaintance.

As you begin to leave the club, though, things begin to get very exhilarating. At the moment the first gunshots ring out panicked clubbers scatter in all directions. As you try and move through the crowd, Yakuza-like figures advance towards you, holding torches with their guns to make finding you easier. While their lights should make them easier to target, instead your senses are overwhelmed. As pounding bass lines mask the bangs of your foes’ guns, mist from the smoke machines, sweeping lasers and pulsing disco lights obscure your view as your try to find a line of sight through the flailing arms of clubbers to take out your enemies. This scene in particular is challenging, original and extremely exciting.

Along with a fantastic co-operative version of the single-player campaign, where the player in control of Lynch is party to his hallucinations, there is an absolutely tremendous multiplayer mode called Fragile Alliance, which is almost substantial enough to be a mid-priced game in its own right. Basically a bank heist game, Fragile Alliance sees you and a team of friends tackle various money storage facilities, but quickly the desire to get more of the cash can destroy any co-operation, and cause divides in your group. There are benefits to both teamwork and backstabbing, and the result is a multiplayer game packed with plenty of action, strategy and a great sense of tension.

But still there are problems. In every game mode snapping on to cover is unreliable, and the basic controls for climbing never seem to work particularly well. For every staggering set piece there is a niggling problem, and it means that while we all wanted Kane & Lynch to be near perfect, it is instead ever so slightly flawed. The visuals are as mixed as the rest of the game. Sometimes stylish and detailed, Kane & Lynch can also come across as rather rough and untidy, though its overall look, most directly influenced by the movie Heat, is generally of a good standard.

If you enjoy games with decent plots, developed characters and brilliant dialogue, this violent, offensive and witty action game is probably worth your attention, and if you’re a shooting game purist, try not to expect too much and you’ll still have plenty to enjoy.

If you enjoy games with decent plots, developed characters and brilliant dialogue, this violent, offensive and witty action game is probably worth your attention.
7 Strong characters Unique co-op play Too many ups and downs A little rough in places