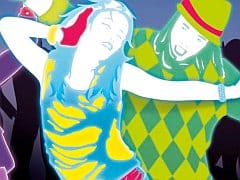 Just Dance 2 will make you look like a tit. Especially if you’re drunk, though this is exactly what most people will need to be in order to even contemplate having a go. In the sobering light of the morning it’s far too hard to get somebody willing to step up as your dance partner: the average member of our team would rather have a gurning image of Alan Sugar tattooed painfully onto their stomach, for instance.

Still, the game is pretty good fun if you can muster up the slither of courage required to give it a go. That’s probably why last year’s effort became a sleeper megahit, shifting seventy three gazillion copies and encouraging every other launch title for this year’s much-hyped Kinect to solely focus around dancing in your living room like a loon.

If Just Dance 2 can sustain the retail momentum of its original, then, Ubisoft will have enough disposable income for Michel Ancel to continue not making Beyond Good & Evil 2 for another 15 years. To put it bluntly, it’s kind of a Big Deal, and Ubisoft has clearly been working away to ensure it stands a solid chance in today’s perilous, recession-stained moneypocalypse.

Which all means production values have been suitably improved for the sequel, aided in no small part by the original’s success. Backgrounds are more detailed than the tacky last-minute Photoshop gradients of the original, and the on-screen displays have siphoned off a bit of Strictly Come Dancing’s excess pizzazz. The screen is also less cluttered, with the game able to convey the same information as before without taking up half the screen with long vibrating bars and a pair of sunglasses (my favourite icon) having an epileptic fit at the top.

All the same technical MacGuffin’s from the original make a merry reappearance. I don’t know how the game manages to assess your full-body dancing moves with just a single Wiimote sitting in your right hand, but I couldn’t fool the game by just waving one arm in the air. On the other hand, though, the game’s a real sod for completing ignoring some of your moves even when you’ve done exactly whatever ridiculous action the on-screen dancers are getting up to. It’s passable, basically, but high-score junkies should stick to Through the Fire and Flames on Guitar Hero 3.

Those on-screen dancers are still good, too; better at dancing than you, probably, unless you’re the dude who plays Mike Chang in Glee. For those who didn’t play the original: saturated neon dancers are your on-screen partners, and you’ll be spending most of your time looking at them (trying to copy their moves) rather than the real-life friend to your side. They’re all dressed up in suitably flamboyant costumes, too, peaking in the hilarious neon-rave outfits worn during Walk Like and Egyptian.

Now, though, Just Dance 2 makes a concession of putting a big glowing Michael Jackson glove over each dancer’s right hand – this, after all, is the game’s favourite part of the body. It’s a little tweak to the aesthetic, but it helps remind players to always prioritise their right hand.

The music selection is unremittingly aimed at the tweenie-pop market – understandable, really, seeing as the members of that demographic will play the game without being forced. The game’s cover boasts over 40 ‘hit tracks’ (I counted 41) but can be boosted with DLC at 300 Nintendo points a pop. Highlights on the disc include Avril Lavigne’s Girlfriend, Cher’s Shoop Shoop Song, Elvis’ Viva Las Vegas, Outkast’s Hey Ya! Wham’s Wake Me Up Before you Go Go and Fatboy Slim’s remix of Sympathy for the Devil. Jackson 5 and in-house covers (boo) of Toxic and Crazy in Love. Bafflingly, Lady Gaga’s Just Dance fails to show up for a second time – while I understand Gaga is so hot right now, you’d think Ubisoft would have enough profit from the original to license the moon.

There’s certainly enough on the disc to appeal to retired disco divas, too, which means Mum and Dad could probably be persuaded to join in with the youngins from time to time. A new team battle mode is begging to be used for some seasonal Moany Parents vs. Whinging Offspring battles, for instance. I stick with my Wham.

One reason it works so well is because the moves are absolutely ridiculous. There is simply no way for two fat men to look cool when trying to pirouette around each other in Vampire Weekend’s A-Punk, for instance, but seeing as it’s so outlandish you don’t have to worry about looking like a pleb. This is the core of many great physical games – nobody expects you to have the contortionist abilities of Houdini when playing Twister, for example.

Elsewhere, Ubisoft doesn’t hesitate to ride the fitness bandwagon in Just Sweat mode, which gives you ‘sweat’ points for playing songs and then charts your daily progress on an exciting line graph. Sweat points are nicely designed to avoid the game having to make any kind of specific boasts as to actual calorie expenditure, but seeing as you’ll be sweating after thirty minutes of Just Dance you can probably guess that it’s working.

In the face of technologically-superior Dance Central, perhaps, Just Dance 2 might look at little limited – but it certainly helps that you’ll be having fun without spending over a hundred quid on the camera. To conclude, then: A copy of budget-priced Just Dance 2 will ultimately make you a happy-looking tit with enough change in your back pocket to make a cool jingly noise when you’re doing some booty shaking.

Just Dance 2 is pretty good fun if you can muster up the slither of courage required to give it a go.
7 Diverse song selection. Great party game. You'll look like a tit. Imprecise.

Dancing for everyone in their living room.

Dancing for everyone in their living room.