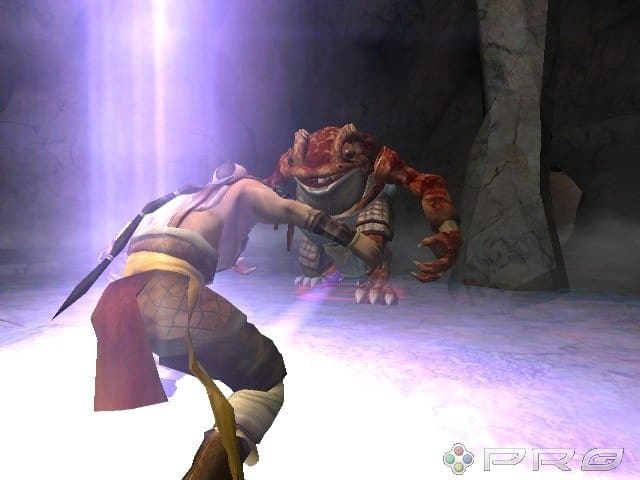 There are times when you play a game and know that you’re playing something just that little bit special. Typically, it’s around 2am in the morning when you have work the next day, and the penny drops that you really have to stop and get some sleep. This is the feeling Jade Empire gives me every time I play it. It’s very, very hard to put down. After the relative disappointment of Knights of the Old Republic 2, I had approached Jade Empire with an air of almost desperate expectation. Little did I know that all my hopes had been realised so spectacularly.

RPGs come in many shapes and forms, from number-crunching stat-fests to more intricate story-led epics. Jade Empire comes from the Bioware stable, developers of the universally acclaimed Knights of the Old Republic and Neverwinter Nights, and definitely falls into the latter of these two categories. Jade Empire isn’t based on an existing pen and paper RPG game, so Bioware have built the whole game from the ground up, with not only their trademark attention to detail, but also with the intention of streamlining the traditional RPG numbers game to the absolute minimum. Whilst this approach is bound to disappoint the d20 worshippers, it will no doubt please the people who break out into a cold sweat whenever they’re confronted with a character sheet full of statistics. There’s still a pleasing amount of character customisation available, however, providing a significant level of replay value, plus the incentive to play as both male and female protagonists, thanks to the inclusion of NPC romances into the plot.

In many ways, Jade Empire is the true spiritual successor to Knights of The Old Republic, so it should be made clear at this point that if you didn’t especially get on with KotOR, the odds are that you probably won’t like Jade Empire, either. There aren’t just passing similarities in the storytelling method, but also with the interface design and the character alignment system. Make no mistake, though, the overall atmosphere of the game is very different.

The transition to genuine real-time combat and the fabulously authentic mythical Chinese graphical styling bring to life a truly unique game world. The Crouching Tiger Hidden Dragon influence is very much self-evident, not just in the aesthetic look, but also in the combat. Jade Empire blends Magical and Martial combat styles with Weapons styles (for example, dual sabers or long sword) plus the somewhat more esoteric Support styles, which do not deal damage, but instead alter the states of enemies to make them easier to strike with the other damage dealing styles, or in the case of the unique Spirit Thief style, steal Chi (used to cast magic and heal) from attackers.

The combat is the chicest chop-socky you’re ever likely to see outside of a Hong Kong cinema, with plenty of variety and verve. Being able to map four different combat styles to the D-pad allows players to seamlessly switch combat styles without pausing the game, and each style is wonderful to watch. The Leaping Tiger style, for example, causes the player to grow Wolverine-style claws (the inevitable lawsuit is probably being worded as I write), and power attacks smash effortlessly through blocking shields, causing enemies to be catapulted through the air. Magic styles, such as Stone Immortal, can encase enemies, leaving them powerless, or helpless and panicking, immolated by the magical fires of the Dire Flame style, an ethereal dragon wrapping symbolically around your character as you unleash the area attack.

At first, it may seem like the fighting mechanics are very simplistic. Moves are restricted to standard attacks, area attacks and power attacks, with blocking and dodging being your defensive options. Attack combos are limited to standard attacks, which might lead you to believe that combat is a simple exercise in button bashing. Whilst you can certainly defeat enemies in this manner, there is far more depth to be found. Switching between Magic, Support and Martial styles in mid-combat can allow you to perform “Harmonic Combos”, which produce power ups of either Health, Chi or Focus (Focus is consumed when you use Weapons styles, or when you enter Focus mode: essentially the game’s version of bullet-time). This rewards a player for experimenting with different fighting styles, and also comes into play with tougher enemies, like demons or undead, which are immune to certain fighting styles. Magic styles can be used to soften up enemies at range, allowing you breathing space to Chi Heal if you have been wounded, before closing in to finish off adversaries with Martial or Weapons styles. Defeating some enemies, such as demons, will reward you with the ability to transform into different fighting forms – the Jade Golem is particularly potent.

This myriad of offensive fighting styles provides almost too much tactical choice, though this in itself is an added incentive to replay the game specialising in different styles. The difficulty level scales nicely throughout the game at the standard ‘Master’ difficulty level, and it’s only the more taxing encounters right at the end of the game or in the Imperial Arena sub-quests that will really test an experienced player’s mettle. The Grand Master difficulty level, on the other hand, provides a significantly greater challenge, with a far greater need to rely on the Spirit Thief style to replenish your Chi in order to heal in mid-combat. Unlike most RPGs, the combat in Jade Empire is not only very aesthetically pleasing to watch, but also highly interactive and is a huge improvement over the pseudo-real time combat in KotOR and far more involving than Fable (which employs a similar, but far more simplified system).

This isn’t the only way in which Jade Empire stands above its peers. In terms of story, script and characterisation, this is as fine an example as you’ll see in the genre. The script is tight, well-written, and brilliantly voice-acted. The finest example of this is a hilarious cameo by John Cleese as Sir Roderick Ponce von Fontlebottom *the* Magnificent Bastard (no, really), a travelling English knight, determined to bring knowledge and culture to the “barbarian” lands of the Jade Empire. The single disappointment in the voice-acting is a singular lack of Chinese accents, especially for the main characters, though that’s a very minor flaw that doesn’t ruin the atmosphere too badly. This is because the art direction, which from the character design to the building architecture, is spot on. From the grandeur of the Imperial City, to the gritty moodiness of the Lotus Assassin Fortress, each location has been lavished with meticulous attention to detail. The graphics engine is a step up from KotOR’s Odyssey engine, with extra character animations, more intricate textures and better graphical effects. It’s also a lot more efficient, too. Whilst KotOR was beset by frequent slowdown, the Jade Empire engine is silky smooth, with barely a hint of a drop in frame rate, even in the heart of Imperial City, where you can expect a score or more of NPCs to be crammed into a single screen in the bustling merchant square.

The main story characters are all interesting, and whilst you can only take along one party member at a time, each one has their own story to tell, and a unique strength which can be used to aid you in combat (in either support or attack mode). Some characters are played for laughs, such as Henpecked Hou, the self-styled Bun Master, and The Black Whirlwind, whose solution to most problems involves death on the edge of his twin axes. After you complete the game it’s worth watching all of the credits to hear Hou argue with his domineering wife (who sadly does not make an in-game appearance) and to listen to Dawn Star and Sky talk about auditioning for their roles in the game (with the voice actors still in character). The script is full of these wonderful little touches, including a veiled tip of the hat to Penny Arcade (which I will let you find yourself).

The storyline itself will be vaguely familiar to anyone that has played one of Bioware’s previous titles, though the execution of the plot is far slicker than in any of their recent works. The game hits the ground running, and doesn’t allow the momentum to flag, maintaining its pace right up until the finale in the Imperial Palace. Without going into spoilers, the game employs a similar misdirection technique to KotOR, and the major plot twist is at least on a par with the “revelation” from that game.

Granted, the game does have a few small flaws. The ending is slightly underwhelming, compared to the events preceding it, though at least it is in tune with the rest of the game, unlike the car crash ending to The Sith Lords. It’s also slightly irksome that you cannot customise the appearance of characters within individual character classes, given that you can tweak everything else. RPG purists will also baulk at the minimalist inventory system, which extends only to the collection of quest items and essence gem upgrades for your character’s Dragon Amulet (which allows the upgrade of character abilities). Some people may also find the game short for an RPG (around 20-25 hours, depending upon how many sub-quests you do), but these complaints are unwarranted because the extra 15 hours you’d normally get in another RPG would usually be spend fiddling around anally with the inventory system and running around on tedious filler quests. The quality of the overall game is of such a high standard that these flaws scarcely enter your mind, and the length is perfectly pitched to suit the more casual player, moving the story on quickly enough to maintain their interest.

Jade Empire is never anything short of entrancing. The level design is impeccable, and all the sub-quests feel like they have a genuine purpose to them, rather than just being there to provide you with a mechanism to level up more quickly. The musical and artistic presentation of the game is perfectly polished, and the combat system is accessible without being overly simplistic. And I haven’t even mentioned the Dragonfly mini-game yet; an unlockable vertical-scrolling shoot ’em-up that is almost worth the entry fee in itself, and can be played directly from the main game menu.

I could eulogise for pages, but that would just stop you from going out and buying the game RIGHT NOW. Suffice to say that whilst perfection is unachievable in a videogame, Jade Empire is the closest we have to date in the RPG genre, hence the 10/10; if this isn’t an ‘Astounding’ game then nothing is. Naturally, the game won’t please everyone, especially sections of the RPG “hardcore” who live by the d20 and die by the d20 (very droll – Ed), but Bioware have created a benchmark-standard title that won’t intimidate newcomers to the genre, which provides some of the most atmospheric and rewarding role playing in a videogame to date.

With masterful art direction and a flawlessly executed script, Jade Empire is a genuine masterpiece of the genre.
10 Fabulous script and pacing Mildly underwhelming conclusion Perhaps too short for some 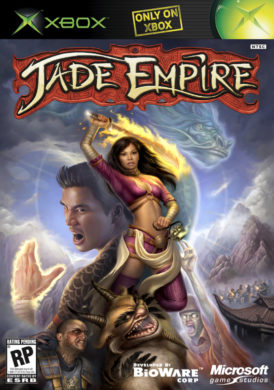 Bioware return to the Xbox with this beautiful action-RPG.

Bioware return to the Xbox with this beautiful action-RPG.