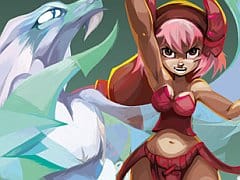 Welcome to island paradise Wakfu, your one-stop destination for pixie genocide. The name might ring familiar to anyone with a faint awareness of ’25 million registered players’ MMO Dofus, an anime-styled product from French developer Ankama Games. Islands of Wakfu is its action RPG prequel on XBLA, a game that, at least superficially, is one of the most creative offerings of the last five years.

Its art style has Miyazaki written all over it from the moment you wake up in a field as Nora, a sort of child-pixie thing who communes with trees and clams along with her wispy dragon-brother Efrim. Artistically the game riffs on everything between Spirited Away and Neverending Story, in fact dragon NPCs even share a certain Falcor quality. Despite having a standard meat and potatoes fantasy plot Wakfu establishes a distinctly surreal tone early on. Nora and Efrin are put in charge of protecting their village along with its odd Deist belief system against alien plant life from outer space, false prophets, and general bad mojo that seems to make nature go mad.

At least I think that’s what’s going on. But it helps that the game is actually sustained by some of its more bizarre elements – elements that move it away from too-traditional RPG fodder and turn it into one of the nicest malaria dreams you’ll ever have. Platypuses become a running gag, for instance, being controlled in some puzzles by your dragon alter ego to pick up objects and generally look hapless. Elsewhere there are hints at something a bit darker with dialogue audio being played backwards all throughout the game, giving an especially eerie and Lynchian quality in later levels when its world begins to decay.

It’s a shame that this kind of quirkiness is utterly skin-deep. While the game stretches its artistic muscles every chance it gets, it approaches gameplay from the other extreme – perpetuating design trends that seemed outdated even by the mid-90s.

Technically the actual combat system is interesting. You regularly switch between Nora and Efrim characters, using Nora’s warrior-styled combat for close-quarter fights and Efrim’s ranged spit-attacks to create what amounts to a single, fluid machine of a fighter. Nora will teleport around the screen, hitting enemies then zipping away from them before they have time to attack, and Efrim will compliment her abilities with his own – stunning mobs by whipping himself on the ground.

But it’s never as fluid as it needs to be. In fact it’s downright clumsy.

Just switching between characters seems to create enough of a pause mid-combat to open yourself up to enemy attacks – an issue when the gameplay is designed around extended grinds of enemies who often spawn stronger enemies when taken out. And despite relying on waves of enemies to fill the game there’s rarely much creativity involved in the different enemy types you’re given.

A boss from an earlier level will turn up again later on for seemingly no reason, with the same abilities and no apparent change in difficulty even when it’s been hours since you last saw him. Even your average enemies seem to be recycled throughout. Porcupine things continuously turn up as one of your main foes from level 1 onwards, while other enemies will just continuously respawn during boss fights to draw out the combat.

Call it a gesture toward the older arcade school of game design. Wakfu issues out bustling waves of enemies in a way that would almost seem at home in coin-ops – they’re rock hard, constant, rarely drop health boosts and will kill you. But the game is also bent on telling its story, and its penchant for unskippable cutscenes adds another colourful layer of gut-wrenching frustration to the repeated arcade-style deaths.

Unfortunately Islands of Wakfu only currently supports two difficulty settings, Initiate and Goddess Mode – the latter of which removes the threat of death altogether. It’s insult to injury on top of a list of strange design choices that seem like they should have been dealt with mid-development – decisions that would have thrown the game completely off course had it not been for the art team. The game’s creative front end is consistently at odds with the rest of its content but it offers enough to draw you into its stunningly awesome world, if only until the frustration sets in.

The game's creative front end is consistently at odds with the rest of its content but it offers enough to draw you into its stunningly awesome world, if only until the frustration sets in.
6 Great audio design Amazing art Gruelling combat Unskippable cut scenes

Ankama’s first console effort, a beat-’em-up adventure and a spin-off of the…

Ankama’s first console effort, a beat-’em-up adventure and a spin-off of the…