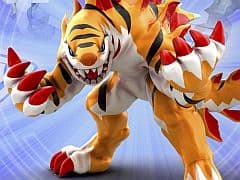 You might have noticed that this review looks slightly different to other reviews on VideoGamer.com. That’s because we look at games clearly designed for younger gamers in a slightly different way to other games. We’ll endeavour to tell you what you need to know in a clear and concise way so you’ll be confident you’re making the right purchase for whatever your situation.

Invizimals is a Pokemon-like collect ’em all game in which you use the PSP and supplied mini camera to grab little creature from the real world. Part of the game is simply finding and trapping these creatures, using your PSP as a viewfinder to discover over 100 different types while exploring the real world. There’s also a battle mode, in which you fight against computer controlled creatures, or those under the command of a friend, sat next to you or online.

Despite its cute visuals and slowly voiced tutorial videos, Invizimals is more complicated than it appears. The idea behind the game isn’t too complex, but the camera-focused gameplay does make capturing and fighting a lot harder than it could have been. The game makes use of a special card, which the camera recognises when placed on a flat, coloured surface. Many of the creatures you encounter need to be captured by staying out of sight, which means you need to move your PSP and camera around to stay behind the beast.

For your creature to appear, the camera must have a clear shot of the special card at all times, so moving the PSP during these capture sequences causes a few moments in which the card is completely out of shot – resulting in your creature disappearing. Finding creatures in the real world is initially rather hit and miss, but more often than not you just need to look at something that is a solid colour.

Battles use a real-time mechanic rather than the more traditional turn-based system of games like Pokemon. There’s some depth here, with three attack buttons and a block move, as well as a stamina gauge to keep an eye on. Various mini games also crop up, although these don’t require much skill to complete.

The idea of capturing these wonderful creatures from within your own world is brilliant, and should appeal to young gamers. It has a definite Pokemon feel to it, although the combat is different and might throw off some gamers who are expecting the game to be a close copy of Nintendo’s series. There’s not much here in terms of questing, either. You can travel around a world map, but it’s not to adventure like you would in a proper RPG. All the adventuring here is done in the real world with you looking around using the camera.

One of the big plus points is the friendly cast of characters who clearly explain how to play the game. These videos have been designed for young kids, with the actors speaking relatively slowly and getting across their enthusiasm for capturing little creatures. Lots of what you see on your PSP screen is just a video of the room you’re in, but the invizimals have been well designed and do appear to be in your world. It’s not EyePet quality, but for the PSP it’s pretty good. It does help to play the game in a well lit room.

The collect ’em all gameplay will be appealing to long-time Pokemon fans, but the game outside of this is basic and won’t hook gamers like that classic series does. The presentation, in particular the actors used in cutscenes, is also heavily targeted at young kids, and will be somewhat irritating for adults.

If it weren’t for some awkward camera moments in which the game loses track of the special Invizimals card, this would be a rather excellent game that makes the most of its big gimmick. Even so, it’s a fun game that has enough novelty value for gamers to look past its flaws. Not for adults, but kids will enjoy the mix of real world and virtual world gameplay.

Invizimals is a fun game that has enough novelty value for gamers to look past its flaws. Not for adults, but kids will enjoy the mix of real world and virtual world gameplay.
7 Animals appear in your home Innovative use of the camera Some awkward camera issues Doesn't have the charm of Pokemon

Interact with the environment, using the PSP Camera to look for invisible…

Interact with the environment, using the PSP Camera to look for invisible…