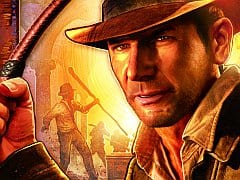 Indiana Jones and the Staff of Kings Review

The Wii takes a lot of criticism for being home to a plethora of sub-par games, and it’s clear to see why when games like Indiana Jones and the Staff of Kings come along. It’s not that Staff of Kings is a woeful game, it’s just that it’s terribly disappointing. We know the Wii isn’t as powerful as the other consoles, but that doesn’t excuse cheap looking, clunky games that have been designed for people that don’t know any better. Those of you hoping to find joy from a Wii Remote whip lash should start looking elsewhere.

As far as the plot goes we’ve got little to complain about, but it’s hardly riveting stuff. Indy is on a quest to find the staff of Moses, and it’s obviously not going to be easy. The quest takes him all over the world, pits him against dangerous foes and sees him taking to the skies in hijacked planes. It’s all very Indy – it’s just a shame that the game itself feels like a cheap knock-off of the great action adventure hero.

In an attempt to let you be Indiana Jones developer A2M decided to split the game into set sections, each with a unique play style. The result is a game that feels rather patched together. In one part you’ll be moving around like Lara Croft, shimmying across ledges and using your whip to cross chasms, moments later you’ll be holding the Wii Remote like a joystick and flying a plane, then you might be crouching behind walls and popping out to shoot enemies Time Crisis-style. In between these sections there’s an awful lot of combat, which is far from the game’s strong point.

You use the Wii Remote and Nunchuck to throw punches (right and left hand), with your gesture determining if you throw a straight jab, hook or uppercut. The gestures are recognised fairly well, but the delay between your action and the in-game result is far too long and the lack of enemy targeting means Indy often faces completely the wrong direction. You can use your whip to knock down enemies or to take people down using clearly marked areas of the environment, or pick up items lying around – such as planks of wood, broken pool cues or dustbin lids.

The decision to try and ram as much Indy into the game as possible probably made sense as it allowed the developers to use loads of Wii Remote and Nunchuck gesture controls, but had A2M focussed on a few areas the overall quality would surely have been far higher. What we’ve ended up with is a game that tries its hand at lots of things, but really only manages to be mediocre at them, and in some cases struggles to rise above poor. A game with a stronger focus on the Tomb Raider-esque gameplay and whip action would have served the fan base well and presumably allowed those sections to be polished to a higher level.

Although Staff of Kings isn’t ugly it’s not really much to look at either. Geometry is basic, animations lack the fluidity of recent titles and there’s a general lack of finesse to the whole package. For example, when Indy uses his whip to interact with someone in the environment, his character model is warped into the correct position before performing the action. It’s ugly and jarring, and something that we really shouldn’t be seeing in a modern video game. Indy himself looks decent enough, with the model looking like Harrison Ford until he tries to make some kind of facial movement, and the sound-alike puts in some solid work without ever really managing to nail Ford’s particular style.

If you grow tired of the core adventure there are lots of extras to unlock. Most of these are pretty poor, such as the numerous four-player mini-games, but one may well convince you to buy the game. Included on the disc is a full version of the classic LucasArts point and click adventure game Indiana Jones and the Fate of Atlantis. It’s as bare bones as a port can be, but even with age not on its side it manages to completely show up the modern effort that you’re meant to be paying the money for. It’s still better played on a PC if possible, but the Wii version is surprisingly solid.

Those looking for an Indiana Jones game to right the wrongs of Spielberg’s latest movie sadly haven’t got what they were hoping for. Staff of Kings tries to do so many things that it fails to nail any of them. The combat is clumsy, the adventuring is dull, the shooting is uninspired and the presentation is severely lacking. This most definitely isn’t the Indiana Jones game you were looking for.

Staff of Kings tries to do so many things that it fails to nail any of them. The combat is clumsy, the adventuring is dull, the shooting is uninspired and the presentation is severely lacking.
5 A variety of gameplay styles None of the sections feel polished Bland visuals Some motion controls feel awkward

Indiana Jones and the Staff of Kings

Step into the shoes of the legendary hero, Indiana Jones, in an…

Indiana Jones and the Staff of Kings

Step into the shoes of the legendary hero, Indiana Jones, in an…