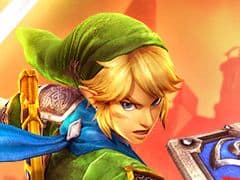 At its core is a series of large maps, home to your foes, with routes being unlocked over time and a boss fight cropping up at the end. Playing as Link, Zelda, Shiek, etc, you usually have to defeat armies, take out zonal leaders to gain territory, progress through a level, and then take on a boss – like Gamoah the spider boss, or King Dodongo from Ocarina of Time.

Despite new characters, movesets, items, and more being unlocked or crafted as you play, the base gameplay changes very little. I found myself feeling like there wasn’t much different at four hours in than during the opening few minutes, but the rhythmic nature of the gameplay makes it oddly addictive.

By making use of the Zelda licence, this feels more appealing than the average Warriors game. Visually it’s more colourful, special attacks are more extravagant, and the soundtrack is full of recognisable tunes rather than fast tempo rock.

An Adventure mode, cleverly built around the map from The Legend of Zelda on the NES, is a nice addition and will provide fans with a considerable amount of extra content. A two-player mode is also available, although sadly there’s no option for online play.

As a spin-off from the Zelda franchise Hyrule Warriors does the job. It’s fun, pays decent fan service, and uses the Dynasty Warriors template well. It’s not as in-depth as Koei Tecmo fans might expect, though, and neither is it close enough to the Zelda formula to easily win over stalwarts. A solid Wii U exclusive, but very unlikely to be a memorable one.