On the surface Hitman: Blood Money is unquestionably an action game. It features Agent 47 – a hard as nails bald lead character – an assortment of deadly weapons and an excessive amount of blood. If played on one of the lowest difficulty settings this action game façade can hold steady throughout the entire game, with brute force and plenty of spent ammo being pretty much all you need to progress from mission to mission. This isn’t a particularly bad way to play the game, as the action is carried out very well, but it is robbing you of a far more impressive gaming experience.

You see, Blood Money, much like Agent 47 for the majority of the game, is wearing a disguise. When played properly, the game is anything but a straight out action game. It’s a game of patience, planning, observation and clinical operation. It’s all about taking out your targets and escaping without anyone being any the wiser. How you accomplish this is pretty much left wide open, with various ways to reach the same goal, but it damn sure won’t be easy.

On a basic level it’s essential that you don’t approach the game like you would a traditional game. Even stealth fans will come unstuck if staying in the shadows is your only real plan of attack. Games often claim to be realistic, but in Blood Money it really does pay to look at every situation as if you were there: what would you do in this exact situation in order to remain unsuspicious? It’s far easier said than done, and your early fumbling will result in many bullets perforating Agent 47’s suit, but sticking with it and remaining disciplined brings a sense of achievement few games can dish out.

When playing the game on a lower difficulty setting a map can be used to show the location and movement of everyone on the level, but this makes things a little easy for Hitman veterans. If played without this rather too helpful map, missions require trial and error, at least until you have a better idea of what you can and can’t get away with. If you see a sign on a door that says ‘Private’, entering in Agent 47’s dapper suit won’t go down well with the guards, but if you drag a guard behind a few boxes, take his outfit and then walk through the door, they’ll be none the wiser. The higher the difficulty setting, the less you can get away with, meaning any slight oddity will be spotted. This is highlighted by the meter in the lower left corner of the screen, with green meaning safe, while red will have every guard in the area trying to take you down.

I don’t want to spoil any particular missions, as many of them are some of the most well designed levels to grace a video game, but you can expect plenty of variety and some wickedly creative opportunities to carry out the job. It’s hard not to notice that the designers IO Interactive have a particular fondness of accidental death by falling chandelier, but this is just one way to do the deed. Among other things, you get to poison people, drug them, push them over a balcony railing, or simply go the traditional route and use some garrotting wire from behind. You obviously want to avoid using a gun where possible, but as long as you don’t machine gun down hundreds of people during a Mardis Gras celebration, it’s not the end of the world.

I’m not going to act all superior and claim that I played through the game like a professional, as at times I lost my head and went on killing sprees in order to successfully exit a mission. This is far from ideal, and immediately forfeits your chance of gaining a Silent Assassin rating, but on certain tricky missions it’s easy to lose it and whip out your SMG Tactical Submachine gun. In an attempt to stop you from doing this regularly, a notoriety rating has been introduced, with a high rating meaning people and guards are more likely to spot you doing things. Seeing as this is carried from mission to mission, you can pay people off after missions, so they’ll keep their mouths shut. If you’re too lazy and leave plenty of witnesses, however, your cash that would have come in handy for some weapon upgrades will quickly vanish.

The save system will undoubtedly cause a little unrest amongst players, with various options available depending on the difficulty you’re playing the game on. The number of mid-mission saves you can use ranges from infinite to none, but these are purely mid-mission saves and they’re lost when you quit the game or restart the system. This actually sounds worse than it is, as most missions can be completed in a relatively short amount of time once you know what you’re doing. Still, if you have to unexpectedly stop playing and you’re doing well, you’ll have to start over next time or leave the game on until you return.

Hitman: Blood Money looks great on all platforms. Whether you’re playing the game on PlayStation 2 or Xbox 360, you get the same supreme style and well modelled environments. The PlayStation 2 and Xbox versions clearly can’t quite compete with the Xbox 360 and PC versions, in terms of resolution, frame rate and subtlety of lighting, but on their respective systems they’re quite an achievement. In truth, while the Xbox 360 version looks nicely polished, it’s not all that much of a leap, particularly if you’re not running the game on a High Definition TV. The visuals are accompanied by a beautiful soundtrack that really hits the mark, and while the voice acting sounds a tad unnatural at times, on the whole this is the sleekest Hitman title to date. Xbox 360 owners can also attempt to unlock the 24 Achievements the game has to offer, which is far from an easy task.

Quite how Eidos is doing it isn’t clear, but this has been one hell of a year for the British-based publisher. With Hitman: Blood Money, Tomb Raider Legend, Rogue Trooper, and even the surprisingly fun Urban Chaos, the company has delivered some of the most impressive action titles of the year. Blood Money might just be the best of the bunch, with depth way beyond that of any other action game released this year, sleek presentation and some of the best levels ever created in a video game. A few people won’t be able to see the game for what it really is, which is a shame, as Agent 47’s latest set of jobs are by far his best yet.

Gun happy action junkies won't be able to see the game for what it really is, which is a shame, as Agent 47's latest set of jobs are by far his best yet.
8 Sleek Tons of depth Great soundtrack Save system isn't perfect 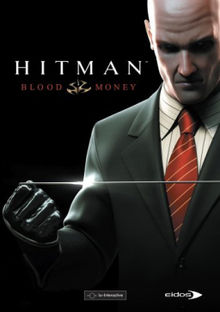