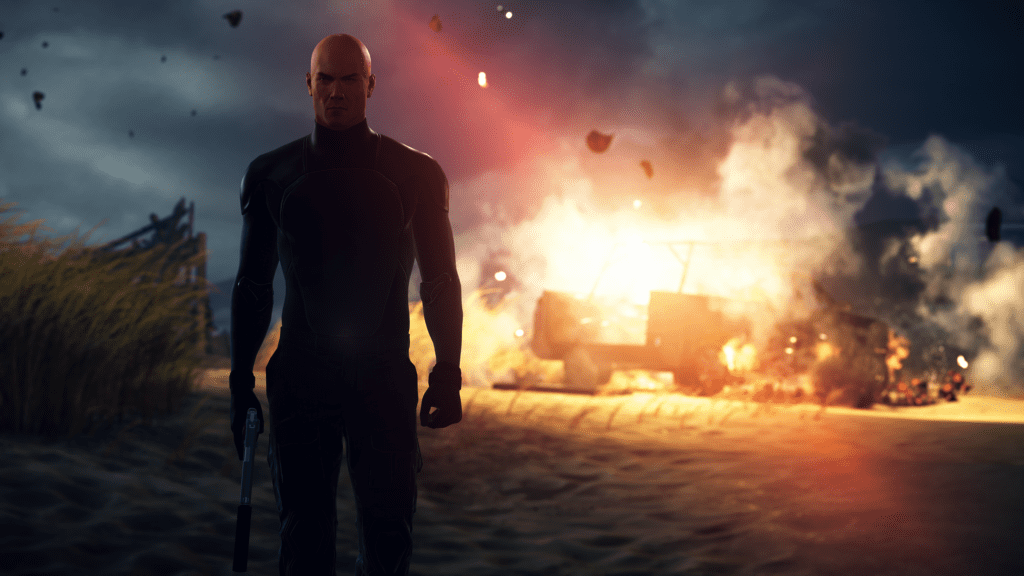 The execution isn’t the best part of Hitman. Listen, garroting your target whilst soon-to-be suspicious guards are within spitting distance is as worryingly exhilarating as a Shaggy/Sting collab. Offing the baddie at gunpoint with your silenced pistol before doing a fast walk away from the scene, like you’ve accidentally bagged a free packet of Custard Creams at the self-service, is equally as wonderful. But that’s not why this stealth mainstay is beloved. Its greatness becomes clear at the same time you’re smothering an old man with a pillow, pushing a drug lord into a hippo pit, or seeing a socialite go up in flames. Well, to be more exact, its majesty takes place during the build-up to those kills. The macabre, yet oh so funny, prep is what makes Hitman 2 as hitmanny as it can Hitman.

The beginning of a level is as overwhelming as picking something to watch from your Netflix queue. Your long-time handler Diana can make recommendations on where best to find a victim-in-waiting, but choosing one is still daunting, let alone your loadout. Filling your lungs with oxygen and anxiety, you embark on your journey around the sprawling Colombian village of Santa Fortuna, or the dense suburbia of Whittleton Creek, not entirely confident that everything will run as smoothly as the scene you’ve envisaged during the loading screen. Trepidation soon turns to excitement when a story mission reveals itself through NPC conversation and you nab a suitable disguise, though; blend in like a local, and your thoughts turn to infiltration and unsettling bloodlust. There’s no such thing as a wrong approach in this reactive playground, and that’s the series’ secret sauce that’s as tasty here as it was in 2016.

I mean, announcing your arrival on trespassed grounds by being trigger happy isn’t necessarily the best way to go about your business, but being spotted isn’t the end; it’s an invitation to try something different. If you’ve been clocked doing bould things whilst wearing that fetching metalworker rig-out, drop it and assume the persona of a barber with a penchant for designer stubble, or an artist who rubs shoulders with the Bollywood elite. A forced readjustment isn’t failure. It’s brilliant. Some of the best moments come when an eagle-eyed chump notices you’re not who you say you are and shit hits the fan, resulting in tins of expired spaghetti flying into the faces of those around you. At the time, it’s more stressful than sitting your A-levels, but when you come out the other side – relatively unscathed – you realise that the frenzy adds to your story. Hitman 2 is full of moments that you own, moments that you wear proudly once the job is done. And you do. With a big stupid grin on your face. 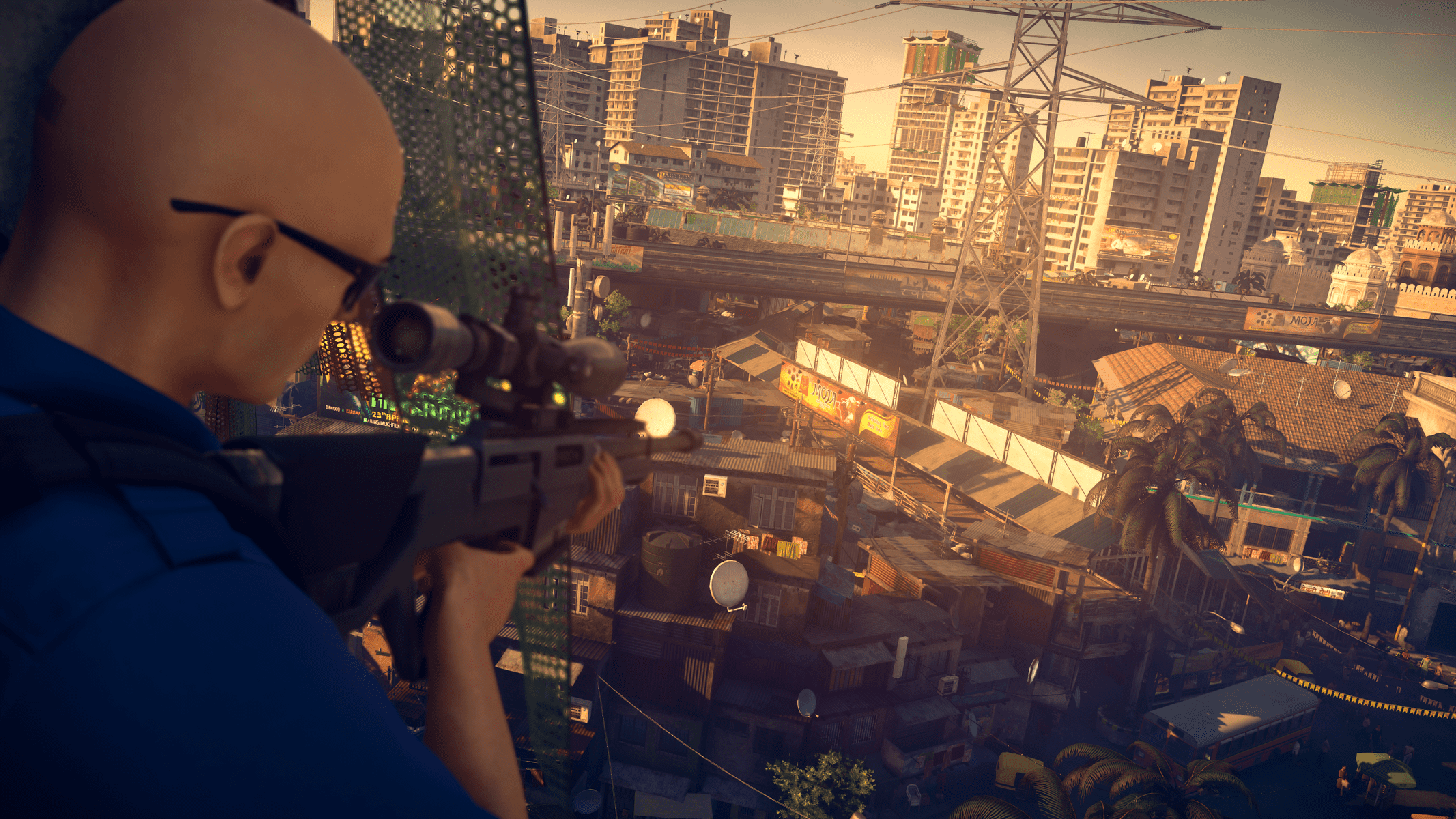 The environment, more than anything, is what gives these anecdotes life. Miami’s main attraction is an F1-style race track, sure, but you’ll come across an aquarium and a robotics showroom if you dig a bit deeper; and the dichotomy between Mumbai’s overcrowded slums and faux Bollywood glamour is a delight. The six locations all offer something a bit different, with all but the easily weakest first stage providing magic. Obviously, you don’t play a Hitman level once and move on, though. Areas offer up a variety of challenges that keep you coming back until you’ve figured out every solution to each of these elaborate puzzles. Y’know, like a Hitman game.

Changes from the previous entry are subtle: items of interest and inquisitive folks will pop up in a little WWF-style picture-in-picture window in the corner now, and you can blend into crowds like Ubisoft’s hooded-hitman. If developer IO Interactive tinkered with the stellar formula too much I’ve no doubt they’d have drawn the ire of diehards, but a couple more additions on top of Mean Gene cam would’ve certainly been welcome. The AI is said to be improved, and, granted, their eyesight is aggravatingly laser-focussed from afar on occasion, but some still have trouble when up close. Poor misfortunes.

One element that most definitely needs a rejig is the story. Because it’s muck. Following on from the events of Hitman, ICA agents 47 and Diana Burnwood are now doing jobs for the powerful organisation they were hunting in the first game, Providence. The influential group’s leader promises details on Agent 47’s past in exchange for the head of the guy you were doing missions for in an episodic format two years ago, the Shadow Client. Apart from the closing moments, you’ll likely remember little to nothing about Agent 47’s latest schlocky tale; it merely gives reason for the barcoded lad’s jet-setting. Cutscenes have been downgraded from fully animated CG sequences to a collection of still images that zoom in and out a bit from time-to-time, with voiceovers over the top spouting some twist-filled jargon. Many may shout that Hitman isn’t about the narrative, but imagine just how good the series could be if it was better. Even a little bit. 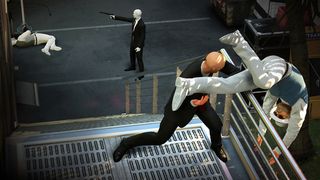 The Ghost Mode script is brilliant, however; it’s mainly full of expletives between friends. This is an example of a single-player franchise adding a multiplayer that works so well you wonder why it’s taken so long. You and one other are dropped into a location – Miami is the only map available at launch with others slated to come shortly – and the goal is to reach five points before your opponent. The thing is that both of you are running about murdering randomly designated marks in your own game worlds.

You’re able to see your rival, but you can’t influence their game in many meaningful ways unless you use items such as Ghost coins, which will attract attention in the two realities when flung. If you grab a kill without being seen, Ghost 47 has 20 seconds to do similar or won’t get a score before the match presents the next target. Down a non-target and you’ll lose a point. I cannot wait for more maps and a full lobby; it’s phenomenal nonsense.

It’s not much of a departure from its predecessor, but to call it Hitman 1.5 would be ludicrously reductive. After all, Ghost Mode is a revelation and Sniper Assassin adds another wrinkle that can be played either solo or co-op. All those factors that ushered the series into the new age are just as sweet here: ridiculous assassinations, disguises that make you smirk, and settings you’ll want to swallow whole. Hitman 2 hitmans so damn hard. And it’s really good at it.

Hitman 2 walks familiar ground and provides the type of delightful moments you expect in the maps on offer, as well as a multiplayer mode with bundles of potential.
8 Prepping for a kill and watching it play out how you want is terrific Prepping for a kill and watching your plan crumble is terrific Ghost mode is an excellent addition to the series Story is a giant ball of whatever