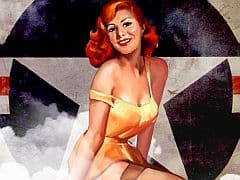 Just how many video games have been set during World War II? By now the total figure has to be well into triple digits, and yet still they keep on coming. True enough, WW2 was the decisive conflict of the twentieth century, and it was inevitable that such an important event would have a permanent impact on the face of pop-culture. All the same, the war’s continued popularity with game developers is somewhat bewildering. There have been other military struggles, you know. Where’s my Trojan War RTS, for pity’s sake?

Heroes Over Europe is a game that’s more concerned with the iconography of the war than with the gritty reality of the history. That’s not to say that Transmission Games has treated their subject in a frivolous manner, merely that this is the kind of game where a single Hawker Hurricane can be tasked with shooting down a fleet of 20 Stuka dive-bombers. As luck would have it, the plane in question is equipped with an infinite bullet supply, recharging health and the power to slow down time – luxuries that were sadly unavailable during 1942.

For all intents and purposes, this is Afterburner: Winston Churchill Commemorative Edition. Players are offered a choice of “arcade” or “professional” control styles – the former simplifies plane handling and limits your ability to roll, while the latter offers complete governance of your aircraft’s movements – but whichever you choose, the ensuing action is light and swift-paced. There’s a clear emphasis on dog-fighting, and while your immediate mission objectives often require you to protect another unit or location from attack, most assignments will end up with an enormous airborne scrap in which you’ll shoot down dozens of German planes.

The core combat in Heroes Over Europe works rather well. Thanks to the fact that your plane regenerates over time, and since the targeting system is rather generous, it’s easy to get stuck into the action without being overly cautious. You do have to lead your targets a little (though not as much as in more hardcore sims), and the AI actually puts up a decent fight, but on the whole Heroes is content to let you enjoy the ride. In addition to the standard shooting, the game also offers something called Ace Kills – essentially bullet-time with wings. If you can keep an enemy within range of your guns for a certain period of time, a little red circle begins to fill in around your reticule. Once this is filled you can hit the left bumper to trigger a slow motion sequence where you try to align your crosshair with highlighted targets on the enemy plane. Pull the trigger at the right second, and you’ll do significant damage to your victim – plus you’ll be allowed to take another shot.

Once you get good at this feature, you’ll be able to take out one engine on a German bomber, eliminate the tail gunner and then shoot out the other jet – all in the space of 10 seconds. Indeed, before long you’ll be chain-killing several different planes in a row using this method – a practice that the game positively encourages. It’s thoroughly ludicrous, of course – but that doesn’t stop it from being fun. Now that someone’s made bullet-time work in a flight game, I guess it’s only a matter of time before someone implements a cover-to-cover system too. I can’t wait to see how that works out.

Aside from the accessibility of its action, Heroes of Europe also gains credit for its audio work. All the voice acting is of a better-than-average standard, and there’s plenty of it too. The English RAF officers are just the right side of being extremely hammy, with lashings of “What ho, old boy!” and other period charm. These spiffing chaps are joined by a commendably cosmopolitan cast, with Scots, cockneys, Yanks and Kiwis all mucking in to fight the dastardly Bosch. This varied selection of voices adds genuine colour to the game, and in general the game feels far more multi-national than a lot WW2 titles.

Unfortunately, all this charm can only carry things so far. Despite its spirited efforts, there’s no getting away from the fact that Heroes Over Europe is a very limited game. Aside from the main campaign, which you’ll be able to tear through in the course of a day, the only other attraction is a fairly bare-bones multiplayer mode. True, as you progress through the game you’ll gradually unlock a selection of planes that can then be used to replay old missions – but unless you have a desperate urge to defend London in a Messerschmitt, this is unlikely to hold much appeal.

In any case, when you see what London actually looks like here, you might be inclined to leave it to the German bombers. The plane models in Heroes are fairly solid and detailed, but the rest of the game looks pretty woeful, with towns and cities largely consisting of identical, block-shaped buildings. Even when the graphics do take a stab at diversity, the results leave a lot to be desired. One early, in-game cutscene shows Big Ben being destroyed by a bomb (it’s okay, it’s only a dream); this is supposed to be a dramatic moment, but since the landmark resembles something made on Blue Peter, there’s a good chance you’ll laugh out loud.

Indeed, there are a few things about Heroes that may provoke a grin or two. My favourite quirk is the fact that when planes collide in mid-air, they’ll bounce away from each other rather than exploding in a ball of fiery death. If you’re really lucky, you’ll also get the sound effect that sounds like a teenager reversing his Dad’s Volvo into a wall. Some of the game’s objectives are equally baffling. One assignment finds you shooting sea mines that are blocking the path of several oil tankers near the cliffs of Dover. This is a pretty strange assignment already, but on top of that, the boats refuse to stop to let you do your work. If you don’t work quickly, they’ll sail straight into oblivion. The idea is that the boats are fleeing from the German planes in the area, but even under these circumstances I’m sure that most captains would want to avoid certain death.

While it’s far from being a total disaster, it’s hard to recommend Heroes Over Europe to anyone but the most ardent Spitfire fan. As an arcade blaster it does a reasonable job, but repetition ensures that even the ridiculous-but-fun Ace Kills get old quickly. If you’re looking for a long-term fix of WW2 fighter action, check out Battlestations: Pacific, or perhaps IL-2 Sturmovik. As it stands, Heroes is probably only worth a quick rental – and only then if you love the banter of dashing RAF pilots. Crying shame, old sport, what?

While it's far from being a total disaster, it's hard to recommend Heroes Over Europe to anyone but the most ardent Spitfire fan.
6 Spiffing voice acting, what? Accessible arcade action Graphics aren't up to much Limited content