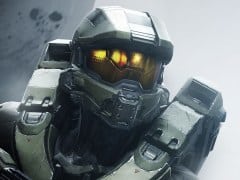 I’ve never thought of myself as a Halo fanboy, but I guess I am. I bought an imported US Xbox just to play Halo: Combat Evolved. I made CDs of E3 Halo 2 footage, and then distributed it to my friends. Halo 2 is one of the only games I’ve put serious time into online. Halo 3 is, I think, the best co-op gaming experience I’ve had. I’ve got less fond (although not bad) memories of the other games, but I still get chills when that iconic Halo music kicks in. And so I did while sat on the title screen of Halo 5. This is the first proper Xbox One Halo experience, and that shiver of excitement was, for the most part, justified.

Having played through the entirety of the Halo 5 Guardians alone, on Normal and select levels on Heroic, I can confidently say that the combat here, presented over 10 or so hours, is the most fun I’ve had in an FPS campaign in many, many years. With Halo 5 set up to be played co-operatively with three allies at all times, I was concerned that the experience would feel hamstrung when played alone, but I’m happy to report that this wasn’t the case. With some basic squad commands (Go here, target this, heal me) I felt like part of a team without being overwhelmed or wishing for human companions. With that said, the experience is even more fun with real people, especially on higher difficulties.

Rather than feeling like a corridor shooter, Halo 5 (like Halos before it) maintains a linear story, but throws you into small-to-large areas where fierce battles are taking place. Covenant and Promethean foes of considerable numbers, often in vehicles or manning high-powered fixed weapons, take up strong defensive and attack positions, forcing you to use the location to flank or take cover. You’re rarely able to remain in one spot, with enemies always looking to flush you out, forcing direct action with whatever combination of weapons you can get your hands on – as well as liberal use of grenades. Making sure you have the best combination of two weapons in your arsenal is a constant battle, but one that keeps things feeling lively.

Encounters may seem unfair on the surface, with sheer numbers clearly favouring your foes, but Spartans aren’t normal soldiers. Whether you play as Master Chief or Spartan Locke (yes, you’re not always Chief, but it still plays like Halo) alongside the Blue Team or Fireteam Osiris you feel like you can take on the world. Helping reinforce this belief that you’re at least twice as hard as Danny Dyer, Halo 5 equips you with some flashy new moves: charge at an enemy and then melee to hit them with the force of a rhino; target a group of enemies from above and slam down as if trying to cause an earthquake while playing whack-a-mole; or boost dodge to evade an attack or to quickly get behind an enemy. You can also clamber up onto ledges. This doesn’t make you feel like a hard man, but is certainly useful and makes you feel like a real person, who has arms.

What I’m trying to say is that, environment big or small, Halo 5 feels like a battle. It’s intense, explosive, fast, and intelligent. There’s more than one way to move through areas, but there’s not a sense that one way is bad, just different. Whereas other games dazzle with set-pieces, Halo 5 puts something impressive in the picture while you still focus on the battle at hand, storming through a group of squabbling grunts in a Scorpion tank or commandeering a Covenant Ghost as you attempt to outmanoeuvre a slow but deadly Wraith.

Only once during the campaign, towards the end, did I feel a little let down by the structure of the combat scenarios. Rather than feeling realistic, you’re presented with a procession of rooms, each spawning high-level enemies. It just felt rather formulaic in the lead up to the conclusion, even if the fighting itself remained challenging and fun.

If you are a true Halo die-hard (read all the books, listened to the podcasts, wrote the fan fiction, created a life-size Cortana doll) you might be wondering how the story holds up. I won’t spoil anything, but I will say that it’s good enough to keep things flowing, but rather stilted in how it’s told and never reaches the heights the game’s marketing suggested it would. Cutscenes are wonderfully detailed, offering a visual fidelity not seen during gameplay, but they all seem to cut off before they’ve said everything you want them to, as if the style guide said they all had to be under a certain length. It’s rather bizarre and definitely left me wanting a bit more exposition.

Much will also be made of Halo 5’s visuals, and rightly so considering it’s easily the biggest blockbuster exclusive to hit this wave of consoles. No doubt there will be pages of internet discussion in which 343’s title is compared negatively to PS4 launch title, Killzone Shadow Fall, and on the face of it they’d have a point. Halo 5 isn’t as flashy, and it’s got plenty of rough edges (no doubt caused at times by a dynamic resolution), but it looks gorgeous despite it. The art design on show here is spectacular, with monumental structures, beautiful skies and sweeping vistas combining with technical prowess to ensure things run at an incredibly solid 60 frames per second. Sure, there are times when shadow detail pops in a little too abruptly, and the jaggies made me wish Microsoft had ditched Kinect to fund a better GPU, but boy, if you play Halo 5 and aren’t wowed perhaps video games aren’t for you.

Cooperative play in the campaign is just a fraction of what Halo 5 offers for online players. While I’m by no means an expert, and in many ways somewhat terrible, there’s an awful lot here I enjoy playing. Split between Arena (home to the more traditional competitive shooter modes like Slayer, Capture the Flag variants and a hardcore no-shield mode called SWAT) and Warzone (larger scale battles on bigger maps that can feature AI foes), initially it might be rather overwhelming.

Although I’m not the biggest fan of the most basic game modes in Arena, Breakout (in which two teams of four go head to head to eliminate the other or capture the flag, with death being permanent until the next round) is superb fun. With players propelled into tight but structure-heavy arenas that could have been lifted out of Tron, what follows is an incredibly tense firefight where teamplay is essential but heroism can still be achieved. First to five rounds means one team can, and often seems to, come back from the brink to take the match into a decisive 9th round – if you end up making that final winning kill, for a brief moment you’re a king.

While Arena feels like a tremendous throwback to Halo of old, Warzone, a brand new mode that combines 12 vs 12 play, massive maps and AI foes, is something altogether different. Each team attempts to reach 1000 points by controlling zones and defeating AI spawned into the battlefield, some being rock hard sub-bosses. With objectives clearly marked it’s not hard to figure out what needs to be done, but I found it incredibly tough to do anything well.

Whereas many of the Arena modes feature close-range combat, in Warzone (and the AI-less Warzone Assault) a lot of the fighting takes place over long distances and inside vehicles – neither being areas of Halo I’m especially good at. The flow of Warzone matches is excellent, with skirmishes breaking out across numerous areas of the maps, but for me the learning curve is incredibly steep. Halo 5’s Requisition cards also come into play rather heavily here, essentially letting you gain access to high powered weapons and vehicles should you have the right card in your pack.

As potentially game breaking as this sounds, the implementation, to my eyes anyway, is excellent. Your in-game Req level increases throughout a match, and you can only use Req cards for your level. You also need to have accrued enough Energy to play the card, with this resource being used up quickly on the higher level items. So, while you can use real world cash to buy new card packs (although I earned plenty through normal play), it’s hard to abuse this to get a massive advantage in game as you have to be playing well to get into that position in the first place.

If you’re not a fan of the Req cards, Arena presents a completely even battlefield, with only cards that change the look of your Spartan or give boosts to your Req and XP earning allowed to be played. Time will tell whether Warzone becomes unbalanced due to Req cards, but so far so good.

In a post Halo: The Master Chief Collection world it’s also excellent to note that Halo 5 has run near flawlessly since launch. Whether taking part in intimate 4v4 matches in Arena or massive 24-player battles in Warzone, the servers have held up incredibly well. Matches are found and launch in good time, lag during games appears to be minimal and fun is being had by all. It’s a shame we didn’t get this robust experience a year ago.

As much as I couldn’t believe Microsoft would allow Halo to dwindle into mid-level exclusive territory, a near incessant noise from naysayers had got me slightly worried about Halo 5. I needn’t have been. Halo 5 Guardians is as slick and bombastic as an exclusive should be, hitting all the right notes in a campaign that is thrilling from end to end and delivering a multiplayer suite full of many delights that play impeccably. Even if you don’t like certain game modes, you’re likely to find a favourite elsewhere.

Maybe I am a Halo fanboy. Maybe you should be too.

Halo 5 Guardians hits all the right notes in a campaign that is thrilling from end to end and delivers a multiplayer suite full of many delights that play impeccably.
9 Superb multiplayer suite Brilliant combat Smooth 60 frames per second Campaign story doesn't fully deliver