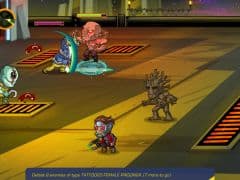 Guardians Of The Galaxy: The Universal Weapon Review

Guardians Of The Galaxy: The Universal Weapon is an interesting mobile title, mostly because its development schedule seems to have switched gears at some point.

Everything about the movie-tie in screams IAPs… and yet there’s not one to be seen. No hidden fees. No ‘free-to-play’ welcoming handshake. No required internet connection. This is good to go after you’ve dropped the initial asking price of £2.99.

With that said, the whole structure of the game feels like spending additional cash was always the plan. An arena-based fighter with light RPG-elements thrown in, Guardians Of The Galaxy wants you to grind away to secure better equipment, more characters and to watch that all-important progress bar continually raise. It does this by dropping nuggets of goodness your way when you succeed, said nuggets then being used to unlock all of the above.

Because of this you need to be a huge fan of just standing in a room, continually swiping your finger to shift your superheroes around. That’s all you’re ever asked to do – be it moving, fighting or pulling off combo attacks – and while there is an odd moreish quality to it, it’s hard not to be a little tired of the formula after an hour or so. There’s just not much to do.

Gaining access to recognisable characters is nice enough, as is the satisfying nature of the grind (should The Universal Weapon’s core do enough to capture your attention, that is), but don’t start thinking this is anything more than a very simple experience with, somewhat, in-depth levelling mechanics built around it.

If you’re excited about the movie and think dropping a few pounds is worth it to keep that fury at a fever pitch… then it probably makes more sense to just hold off and use the cash to see the film twice. The usual ‘if you’re a fan’ nonsense obviously applies, but there are far better ways to live up to that idea than play this. Acceptable, but forgettable.

Reviewed on an iPhone 5.

Guardians of the Galaxy is an okay mobile game. And that sentence is as exciting as the game itself…
5 Looks pretty nice. No IAPs. Repetitive. Dull.

Guardians Of The Galaxy

The video game that ties into the movie Guardians Of The Galaxy.

Guardians Of The Galaxy

The video game that ties into the movie Guardians Of The Galaxy.