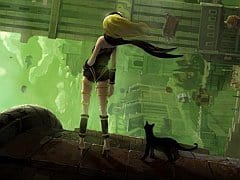 Amnesia is an overplayed, clichéd story conceit, so it’s a shame Gravity Rush relies on it to get players into what is actually an interesting universe. Protagonist Kat awakens after a long fall to find herself in a strange floating city with no memory of her past. Gravity storms are ripping the place to pieces and a black cat, seemingly made of rippling stardust, is following the heroine. It’s during this action-packed opening sequence that Kat – and the player – learns to control her gravity-defying abilities.

The big gimmick of Gravity Rush (known as Gravity Daze in Japan) is the ability to switch the direction of gravity. The right shoulder button suspends Kat in midair, and if you aim the camera in the direction you want to travel and tap it again you’ll zoom off as if falling from a great height. It takes a lot of getting used to and is definitely one of the most mind-bending traversal systems I’ve ever encountered, but it becomes tremendous fun once you get the hang of it. The left shoulder button returns gravity to normal and, after a while, you’ll be using the two in tandem to land exactly where you want with pinpoint accuracy. Movement this free feels liberating.

Levels are designed to encourage exploration. A hub world is littered with collectible gems, which are used to upgrade abilities, and hunting them down is a great way to get used to the unconventional controls. As are the many challenge levels which pop up throughout the game.

Challenge levels have you, ideally, going for gold medals and are unlocked by spending gems to fix broken parts of the city and come in different flavours. Among them are combat challenges, tasking you to defeat as many enemies as possible within a certain time limit, and races, for which you must take advantage of all the skills at your disposal to pass through the checkpoints as fast as possible.

Possibly the most fun of the lot are the sliding races; holding your thumbs to the bottom corners of the Vita’s screen sends Kat zooming across the floor and control transfers from the analogue stick to the Vita itself, which you must turn like a steering wheel to change direction. This ability can be used at any time throughout the game and is actually far more fun in practice than it sounds.

The meat of the game, however, is the 21 story missions. Each one opens with a cutscene that plays out in comic panel frames, and sliding the screen moves onto the next page. These cutscenes, like the rest of the game, have a wonderful cel-shaded manga style to them. The world feels a bit steampunk and has an old-school European vibe to it, where pipes jut from the city’s nethers and old railways span the sky amongst huge skyscrapers and giant clocktowers.

For the first half of the game missions involve helping out the local police and, later, a mysterious old man to rescue parts of the city that have been swallowed by the gravity storms. Doing so allows access to these new areas, and the game map is constantly growing. Things change pace a bit after that, with a few more strands of the story becoming apparent. While Kat herself is a little ditzy, it’s easy to get embroiled in her mystery. Who is she? Where is she from? Why is she being followed by a magic star-cat who allows her to manipulate gravity?

The supporting cast has a few standout characters and the ongoing mysteries are definitely a sufficient enough draw to keep you playing. Talking to random townsfolk will give hints at things to come, though if you’re looking for a neatly resolved ending with all loose ends tied up you’re in for a disappointment.

There’s a strong mythology present in Gravity Rush, which really fits with the game’s aesthetic. It doesn’t take itself too seriously, but it’s not so daft that you stop caring. As your reputation as the Gravity Queen increases, you’ll see newspaper clippings showing what the residents of the city think about you. Your reputation also ties into your skill progression, with higher levels of each ability unlocking throughout the game.

Combat may seem incongruous in a game that is about flinging your avatar around Mario Galaxy style level-spheres, but actually it fits remarkably well. Kat has a pretty strong kick when planted on the ground, but mostly you’ll find yourself throwing her at enemies at high speeds. Enemies are signposted with very prominent weak spots. These start out pretty small, but soon enough you’ll be fighting much larger Nevi with multiple weak points, all of which need to be destroyed in order to defeat them.

Despite a few lengthy load times, a terrible name and an unimaginative character introduction, Gravity Rush quickly became a very enjoyable game indeed. It doesn’t feel like a typical handheld title, either: Gravity Rush has the depth, length and graphical prowess of something you’d see on consoles. The mission-based structure is great for portable play and the story is worth the investment despite the many unanswered questions. It’s easily the best experience I’ve had on the Vita thus far.

Gravity Rush is a very enjoyable game despite a few lengthy load times, a terrible name and an unimaginative character introduction
8 Great art style Incredible freedom of movement Loading times are longer than we'd like Controls take a lot of getting used to

Directed by Keiichiro Toyama, the core mechanic of the game is the…

Directed by Keiichiro Toyama, the core mechanic of the game is the…