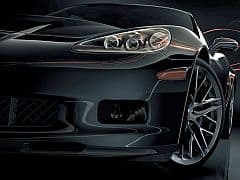 I had a strange moment while playing Gran Turismo on the PSP. In my clearly tired head I’d started to think about how the game doesn’t really look that great when compared to recent racers DIRT 2 and NFS: Shift – games I had been playing on the Xbox 360. Then it dawned on me. I was comparing a game on Sony’s small handheld to full-blown next-gen titles. What I was playing felt like a console game and I got a sense of excitement that only the handheld’s greatest titles had evoked in the past. This really is the Gran Turismo experience on a handheld that everyone’s been waiting for.

That’s probably all most of you needed to read. The Gran Turismo series has been setting the driving benchmark for years, so to have that experience on a handheld is remarkable. Certain things have been changed so the game feels more like something to play here and there while on the move, which has the knock-on effect of making things feel quite basic to begin with. There’s no career mode as such, with the single-player menu simply presenting you with three variables: Mode selection (Time Trial, Single Race and Drift Trial), Car Selection and Track Selection. The player able to pick and choose circuits and vehicles, with credits earned based on the difficulty, performance and number of laps you’ve chosen.

Initially the lack of a structured single-payer mode is quite a shock, but difficulty rank info next to each track means there’s still a clear indication of what you need to do. There are 45 tracks (including layout variations) on the UMD (or digital download), and most of these can also be played in reverse, meaning there’s loads of content here. You get everything from the tight winding Mediterranean streets of Costa di Amalfi and the long straights of New York, to the famous Laguna Seca racing circuit and a dirt track set in the Grand Canyon. There’s even the ultimate driving test in the shape of the Nurburgring.

If you were worried about the car count due to the limited storage space on UMD, think again. GT on PSP features around 800 vehicle, each meticulously modelled and specced on their real life counterparts. As ever you’ll have to start with a low powered car that will make it feel as if you’re crawling around tracks at a snail’s pace, but it’s fairly easy to earn credits and save enough to buy something a bit beefier. Before too long you’ll catch the car collecting bug, with that ‘just one more race’ addiction that all the GTs have had down the years. Until you’ve got everything the game has to offer there’s always something better worth racing for, meaning it’s hard to put the PSP down once you start playing. Sadly the dealerships available change after each race, so you won’t always be able to buy what you’re after.

Sadly missing from GT on PSP is vehicle upgrades. If you wanted to be able to kit out your cars with new turbo kits, rear wings and a sports gearbox, you’re not going to find it here. There is a set of tuning options, though, with power, weight, aerodynamics, ride height, spring rate, damper toe and camber angle all being adjustable in the Quick Tune menu. Without any way to invest extra cash in your cars or visually customise them, it’s unlikely you’ll grow as attached to them as you probably did with your best in previous GTs. The knock on effect of this is that it makes the game feel a bit dated in comparison to other recent racers.

This will matter very little when you’re actually racing, though. Gran Turismo on PSP feels like Gran Turismo, even when played with the usually less than satisfactory analogue nub. No other driving game on the handheld comes anywhere near to delivering a handling model this advanced, with tracks so detailed you can feel the bumps and undulations in the road surfaces. Stick with the game in the first hour or so, as you have to contend with driving in cars that have little to no sense of speed, and you’ll eventually be cruising around some stunning tracks and pushing supercharged beasts to their limit.

If you’re not entirely happy with the way your car’s handling there are a number of pre-race options that can be changed. Manual or Automatic transmission is the most basic, but there are also options to change your front and rear tyre type, the level of traction control, automatic stability management, active steering (to help correct oversteer) and simulation. Simulation can be set to standard or professional, with the latter making your car considerably more difficult to control but delivering a more realistic experience.

At times ploughing through the fairly uninspired single-player mode can get a little dull, but thankfully there’s a more focused Challenge Mode that more than makes up for it. There are more than 50 challenges, split between nine difficulties, designed to get you up to speed with driving basic corners through to the most advanced sections of track. It’s not quite the licence tests of old GTs, but with bronze, silver and gold medals to earn and loads of credits up for grabs you’ll want to invest a fair amount of time perfecting small sections of track.

By far the biggest disappointment is the underwhelming multiplayer functionality. All you have here is basic four-player local wireless play across a handful of modes, with various options that allow players of all skill types to play together. There’s no online play, which is a big shame considering other racers on the PSP have offered it. There isn’t even any online leaderboards for time trial times or the ability to share ghost laps with other players (this is limited to your own best laps). While it’s great that the core GT experience has arrived on the PSP, it’s hard not to want a more complete package.

Another personal problem is dirt and ice racing. These courses simply aren’t fun, with the slippy handling proving a nightmare to get the hang of – thankfully they only account for eight out of the 45 tracks. Far better is the drift racing, which actually works better than similar modes in other racers. Here your time is irrelevant, with your position determined by points earned by powersliding around corners. It’ll take time to get the hang of and you’ll need to tune your chosen car to get the most out of it, but it’s another well implemented component of Gran Turismo on the PSP.

For all intents and purposes GT on PSP looks like GT4 with lower resolution textures and some unfortunate graphical glitches. It’s easily the most visually impressive racer on the PSP, for the most part running at a silky 60 frames per second, but dotted white lines that appear on the tracks and scenery give the game an almost rough appearance. The built up courses are by far the most impressive, boasting stunning detailed buildings and gorgeous views, and the vehicle models are what you’d expect from a developer that clearly loves everything about cars. There’s also a solid audio track list and each of the cars sound authentic – you can even play your own MP3s once the feature is unlocked.

Make no mistake, this is Gran Turismo as you remember it but on a handheld, and done in a way that betters what I imagined was possible. It looks great, plays superbly and has an absolute ton of content to work through. It’s impossible not to feel more than a little let down by what’s missing, though. A more structured career mode would have been great, online leaderboards and ghosts simply should have been included, and the lack of online play is bitterly disappointing. Who knows what will be added to the game post release, but as it stands we’ve got the ultimate handheld driving game with a fairly bare bones feature list. Buy it, spend hours earning credits and buying cars, and try to overlook the glaring omissions without shedding a small tear.

This is Gran Turismo as you remember it but on a handheld. Buy it, spend hours earning credits and buying cars, and try to overlook the glaring omissions without shedding a small tear.
9 It plays like Gran Turismo Feels like a console game in your hands Stunning visuals No online functionality at all