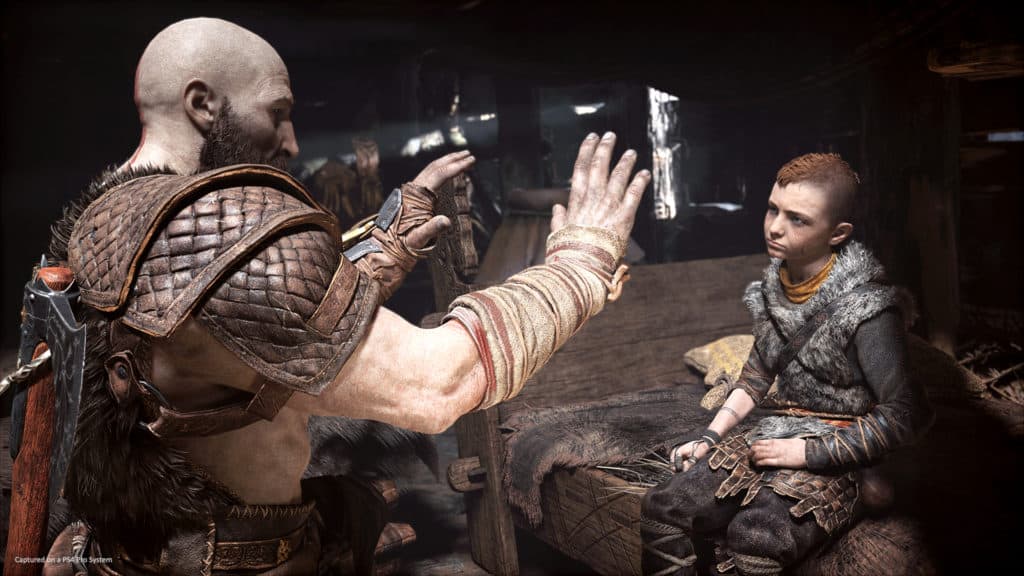 The setting for God of War (2018 flavour), post Kratos’ decimation of Mount Olympus, is very different from his time in Ancient Greece, but thematically the Norse kingdom of Midgard follows on very well. Despite his propensity for extreme violence you can easily get on board with Kratos butting heads with (and then ripping those heads off) the pantheon of Greek gods because, even in what we may think of as their own mythological canon, they’re capricious backstabbers rather than wise benevolent rulers; likewise the Norse gods are often, just, the worst. A lot of them are the sort of gods you pray to to avoid terrible things happening to you at the hands of that selfsame god, like, ‘O mighty Thor, your hammer is very impressive and you’re amazing. Please do not set my house on fire and electrocute all my sheep for the laugh. Yrs cordially, Snorri.’

The way Norse mythology is woven into the game, as a backdrop for the more subtle God of War story of mass monster murder but as a vehicle for father/son bonding, is possibly my favourite part of God of War. The elements of it are often impossibly huge. There are mountains that are far too high, trolls that are far too large, trees that are far too transdimensional. There are tortoises big enough to carry around small cottages, corpses big enough to create topography, and serpents big enough to encircle the world, and it’s all wonderfully epic. And the hugeness of the cyclical, eternal battle that Kratos and his son are caught up in balances with the smallness of their own interpersonal struggles. There are quiet moments where Atreus asks his father to tell him a story, as they paddle around a wide lake full of shipwrecks, and then a huge shadow passes over the boat and you look up to see the cathedral-sized head of the world serpent shifting slightly as it looks out over the landscape, and you go, ‘Wow, yeah, this is a world where gods exist and technically that includes us in this tiny boat.’ It’s impressive in both the huge scale and the small.

This God of War isn’t a cavalcade of deity murder, done and on to the next one, like previous entries in the series. There are, in fact, relatively few gods in God of War at all, and very few QTEs in giant fights. While you run into giant monsters and get in big fights, the two don’t coincide as much as you might expect in the general course of the game, and combat is usually real time. There’s no QTE to successfully have sex with the goddess of love; there is a QTE to save a beglittered pig from bleeding out. That the game spends more time on character exploration, as well as actual exploration in the world, is an approach that I really enjoyed, particularly as many of the different realms you can visit are moderately full of secret areas and puzzles that you can’t solve yet but will be able to later, and reasons to double back and explore together – and the snow is really fabulous to stride through and scatter the disintegrated parts of undead draugr across. And yet you get the feeling that parts of the world are deliberately closed off, and run-ins with other gods are being held back, for future DLC. 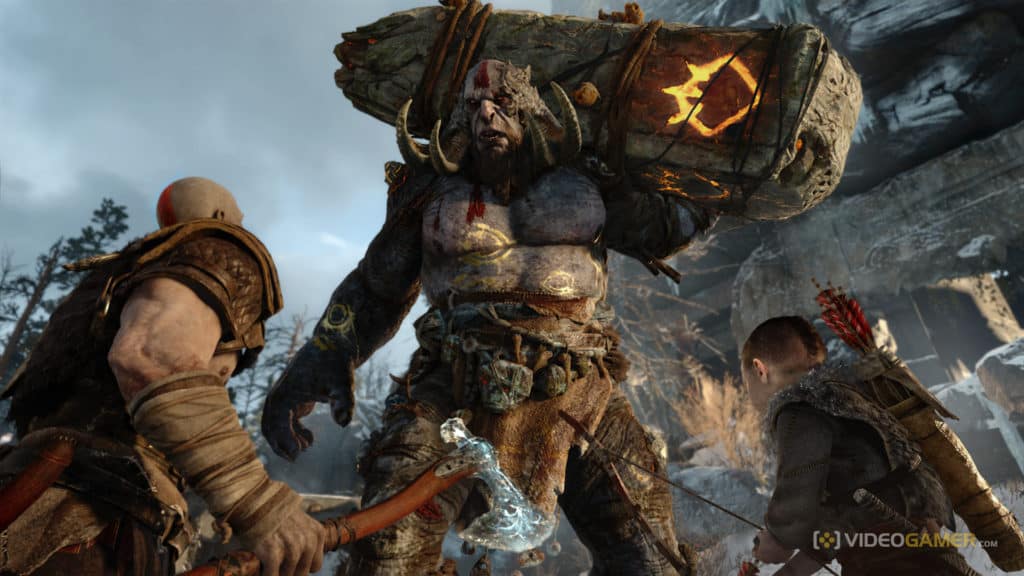 The beating heart of the game, though, is Kratos struggling to bond with an almost adolescent son. What starts off as a relatively simple trip to the peak of the nearby mountain swiftly becomes a larger quest fraught with interdimensional travel and danger from unanticipated corners. Rather than a bloody thirst for revenge, Kratos’ story this time is set in motion by a more uncomplicated kind of grief (though, in one of several smart callbacks to his old life, it also involves carrying ashes with him), and the fights he gets in along the way are kind of insult to injury: oh god, I already struggle to relate to my son and now we’re being attacked by elves who have magical flash grenades. Kratos does learn to open up to his son, and eventually starts calling him ‘Atreus’ sometimes instead of just ‘boy’, but Atreus goes through much more change over the course of the game. He starts off cowed and a little afraid of his father, then grows angry and sulky at being treated unfairly, all before becoming overconfident and falling back down to earth – or Midgard –with a bump. His growth, and the growth in how father and son interact and relate to one another, is nice to watch, though Kratos remains, in some respects, too gruff and shouty to display as much subtlety as Atreus does.

Atreus grows in combat capability as he does in confidence. He helps Kratos in battle, and will often ask how he did after a fight (Kratos’ answers go from blunt criticism to a heartwarming ‘You did well.’ over the 30 something hours of the game). To start with Atreus will just shoot arrows to distract enemies, but he’ll eventually progress to knocking them down, strangling them with his bow to give you an opening, or jumping and firing from mid air, and it’s immensely pleasing to dust off a cool, improvised combo with War, Jnr. Almost brings a tear to your eye.

Kratos, meanwhile, has an icy axe that he can throw and recall like a boomerang, as well as sweep and swing at enemies, for the mighty and brutal cleaving thereof. There’s also a shield to combine with bare fists that parries and stuns enemies and leaves them open to some truly wince-inducing, rip-off-their-jaw-and-rib-cage finishers, so the spirit of the Ghost of Sparta still lingers. Combat is more involved than previous entries in the series, and the camera puts you closer to the action. It’s challenging and satisfying but can be frustrating, as the tighter camera angle can sometimes see you mistiming a dodge or underestimating the enemy’s reach, even if they’re lower level than you. 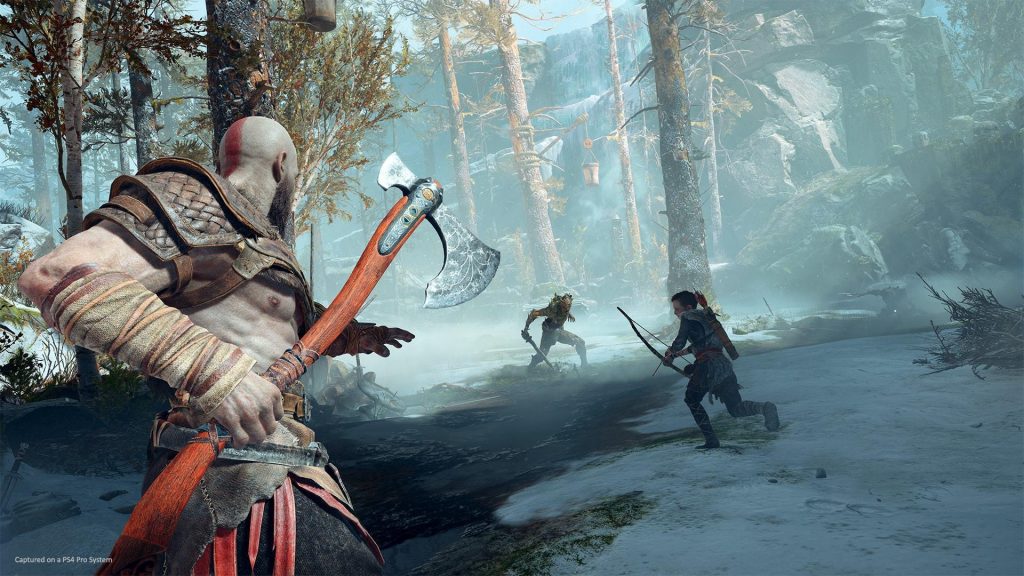 Levelling itself is more naturally integrated than just killing thing to gain XP. XP is important, because you use it to unlock and upgrade abilities, but your level is determined by how good your equipment is, which is a cool way to level a career warrior coming back to warrioring after a long time off his warrior game. You start off in some rough and ready leathers with a pretty simple axe, and can buy and upgrade your three different armour pieces (chest, wrist and waist) depending on the stats you favour, until you’re wearing brightly polished metal with three rune sockets – one of which, for example, grants you a chance to randomly explode into flames – and weild an axe with gold inlay on the blade and an intricately carved handle that crackles with electricity. Every time you upgrade your axe it grants access to a new row of attacks with it, so by the end you feel like an night unstoppable force. Which you kind of are.

You do come up against an immovable object, though, because as well as a cast of few and therefore well-realised supporting characters, God of War provides one of the most complex and perversely enjoyable villains in recent memory. He’s intense and I really fancy him charismatic but also very scary, and as the game goes on you see some tragedy that doesn’t in any way make him less terrible but does give him a compelling motivation. He’s an awful lot of fun and an awful lot of pathos, and you should really experience him without more input from any reviews you read. Your encounters with him are sure to be some of the highlights of your game, but their placement is a little skewed, with the final in particular meaning that the actual end of the story itself feels a little anticlimactic.

It’s a bit of a shame, because for the most part the game has achieved such an impressive balance between contrasting elements (including Extreme Violence vs. Being A Good Dad) that you hardly notice it’s being done. It plays easy because it was made hard, and the result is undoubtedly the coolest and most interesting God of War game to date. And yet the ending itself, while it closes one avenue for Kratos & Son, just hands you a bunch of new plot threads. It doesn’t feel like an ending as much as it feels like a mid-season break. Come, son, it’s time to go home; the six hour story DLC will be arriving soon.

God of War achieves a very impressive balance between the epic and the mundane, between the ultra violent and the domestic. It's undoubtedly the coolest and most interesting God of War to date.
9 Cool development of a father/son relationship Norse mythology provides an excellent backdrop You can still step on heads until they explode