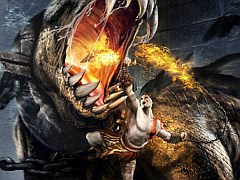 Ever since the PSP burst into stores we’ve been waiting for true console-like gaming experiences to arrive. Sure, we’ve had a few classic games on the PSP, but only now, in the shape of God of War: Chains of Olympus, do we have a game that turns Sony’s handheld into a portable PS2. Chains of Olympus is not only a stunning entry in the God of War series but the most impressive PSP game released to date – if you’ve been sitting on the fence over buying a PSP, now’s the time.

For anyone following the plot and timeline of the God of War games, Chains of Olympus takes place ten years prior to the original PS2 game. The opening level sees Kratos defending the city of Attica from an invading army, slaying hundreds of soldiers in typical bloody fashion. The story eventually centres on Helios, whom Kratos must find in order to counter the deep sleep Morpheus, the Greek god of dreams, has cast on the other Greek gods. Suffice to say, it’s a lot trickier to explain than it is to experience. The result is a quest through typical God of War environments, fights against mythical creatures and enough bloodshed to shame even the most prolific serial killer.

What’s initially quite overwhelming is just how good Chains of Olympus looks. It’s been well publicised that developer Ready at Dawn has been able to use the PSP’s full 333Mhz processing speed, and it’s paid off. On the PSP’s small screen at times the game looks every bit as good as its PS2 cousins. Of course, concessions have been made, so Kratos isn’t quite as detailed, the environments are generally a little smaller than long-time fans might expect and the number of enemies on screen at once is fewer than in the PS2 games, but on the whole it’s an astounding technical and artistic achievement for the PSP. Simply put, no other PSP game comes close to being this impressive, and it’ll make you wonder what is possible in the console’s future.

One of the big concerns existing God of War fans had about the series coming to PSP is how the essential roll/evade move would be translated to the single analogue stick PSP. On the PS2 the left analogue stick handles all character movement while the right stick is used to make Kratos roll in order to evade enemy attacks. On the PSP rolling is now performed by moving the analogue stick while holding down the two shoulder buttons. At first this is more than a little awkward, but by the end of the first level it became pretty natural. It’s nowhere near as intuitive as using a second analogue stick, but probably as good an alternative we were going to get on the handheld.

Outside of this control compromise Chains of Olympus plays remarkably similarly to the two PS2 games. Although God of War’s combat is deeper than a generic hack ‘n’ slash, it’s nowhere near the level of complexity you’ll find in Devil May Cry or Ninja Gaiden. It’s fair enough to say the game has always focussed on flashy attacks, combos and magic over deep combat, but it’s no bad thing. Anyone can feel like a bad ass while playing God of War, and there’s enough variety in the combat to make sure things never feel repetitive.

As in the PS2 games you can purchase new attacks by spending the red orbs you collect from downed enemies and the chests placed throughout the game. You’ll also pick up green orbs to replenish your health and blue orbs to replenish your magic. As the game progresses you’ll gain access to a number of magic attacks, each one upgradeable by spending red orbs. Although for the most part you can progress by simply hammering buttons, at times you do need to use the counter move you learn pretty early on, and you can be as flashy with your attacks as you want.

Something the God of War series does brilliantly is creating a spectacle, and Chains of Olympus is no different. Even on the PSP you get a real sense of the epic battle raging between the gods. All the high quality cutscenes and voice acting found in previous games is present in this PSP game and it’s hard to think of an area which falls far short of the two PS2 games. The one factor that might put off some players is the short play time. Experienced God of War players could probably clock the game in under five hours, while novices are unlikely to get more than eight hours out of their first run through. There are unlockables and the game is more than good enough to play through a second time, but a campaign double the size of what’s on offer would have been much preferred.

God of War: Chains of Olympus is at its core a remarkably simple game, but it’s presented so well and plays so smoothly that the end result is a must-own PSP title. It’ll make you question the visuals of every other PSP game you play and have you longing for more. If you’ve been after a reason to pick up the PSP this is it. It’s only March and the handheld game of the year has probably already arrived.

If you've been after a reason to pick up the PSP this is it. It's only March and the handheld game of the year has probably already arrived.
9 Great production values Thrilling gameplay Stunning visuals Pretty short

God of War: Chains of Olympus

First God of War title for the PSP.

God of War: Chains of Olympus

First God of War title for the PSP.