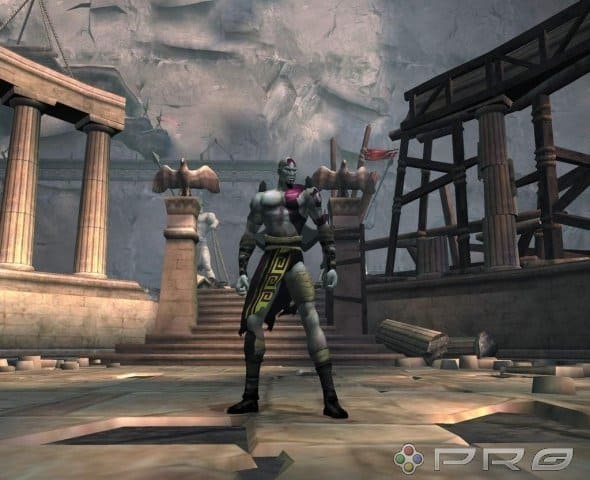 God of War is actually a very simple game. You could simply call it a hack’n slash adventure. For 90% of the game you are repeatedly pressing combinations of buttons in order to dispatch endless waves of enemies. I generally wouldn’t be interested in a game like that. They usually become tiresome very quickly and I have better things to do than hammer buttons for a few hours. While you probably could hammer your way through the game, there are a huge number of combos that can be performed, weapons and magic to upgrade and some utterly brutal finishing moves to perform.

Brutal, would in fact, be a better word to describe the game. While normal combat moves will see you slicing enemies in half and throwing blood everywhere, special finishing moves that are performed by pressing the buttons that correspond to the on-screen prompts are the most vicious attacks I have seen in a videogame. Whether you’re shoving a weapon down a Minotaur’s throat, or decapitating one of Medusa’s helpers, it’s all extremely violent, and, if you don’t mind that kind of thing, much fun.

The story in God of War is actually incredibly involving and something I haven’t experienced in a game of this type before. Starting off with the game’s hero, Kratos, throwing himself off a cliff to his certain death, it’s obvious that this isn’t going to be a tail to tell to your grandkids. The game starts off grim and runs with it until there is nothing that will shock you. This suicide is actually two weeks after the game starts and the build up to this event is told brilliantly, with beautiful cut-scenes telling the story at various points in the game, all coming in the form of flashbacks. Kratos has a dark past and his story is one of the most compelling parts of the game.

I admit that I’m probably a little bit of a graphics whore, and having said that, the fact that I think God of War looks gobsmackingly good is an even bigger compliment to the game. I seriously didn’t think that a game on the PlayStation 2 could look this good. The environments are huge and stretch off in to the distance. If you see a mountain in the distance you can probably reach it. The fact that the camera is fixed makes the beauty rather annoying at times, as you’ll want to take a good look around, but it won’t let you. Load times are also minimal; the game will generally stream data in while you’re playing and rarely shows you a load screen.

Kratos himself is animated wonderfully and pulls off his moves with the fluency and grace of a dancing ballerina. The enemies are also modelled and animated well, and come at you in huge packs, often filling the screen. They all have distinct attack patterns so once you learn when to block and evade attacks, you can take on large groups of enemies with confidence. The odd bit of magic doesn’t hurt either. You’ll gain new magic abilities as you progress and by the end of the game these attacks are incredibly powerful. Your maximum magic power and health can both be increased by collecting items from chests hidden in the environment, and collecting the orbs that defeated enemies leave behind replenishes these vital attributes. Red orbs are used to effectively buy weapon and magic upgrades, and the game is plenty generous with these.

For the sound to match the visuals the sound engineers would have had to do an amazing job, and they have. The score that accompanies the action is epic and fits the game far better than any other game score that I have heard on the PlayStation 2. It changes dynamically to match the mood as well, with the tempo increasing as the action heats up. The voice acting in the cut-scenes is also top notch. It would have been so simple to miss-cast the narrator, but her voice is perfect, drawing you into the story.

As I said, God of War isn’t a perfect game. There are a surprising number of puzzles scattered throughout the game and while a lot of them are brilliant, a few of them are painfully annoying. At various points environment puzzles left me completely baffled as to what to do. Some of the puzzles seem more about searching every inch of the environment than actually solving anything, but these can be forgiven. Also, while the game is actually pretty linear, it would have been nice to have a map of some sort. You do on occasion have to backtrack around certain sections and it is relatively easy to forget where you are.

When you’ve finished playing God of War you’ll feel like you’ve been on a huge journey and taken part in an epic story, but in reality the game isn’t all that long. 12-14 hours is about the time it will take most players to get through the game and while this is a tad short (although pretty average these days) you don’t feel cheated. It’s thoroughly entertaining from start to finish – well start to finish if you take out the “why the hell did they put this in the game” moment near the end – and is a game you’ll look back on with fond memories in years to come.

Once complete the game gives you a fair amount of rewards. There are discarded enemy galleries, trailers, a cinematic viewer, cut levels, extra hard God mode, a special challenge mode and more. It really is a collection of the best bonuses any game has offered and worthy reward for finishing such a fine game.

So, there you have it. God of War is one of the greatest games this generation of consoles has seen. The fact that you are playing it on a PlayStation 2 makes it even more unbelievable. It’s a brilliant experience from the moment you start the game, right through to its dramatic climax. If you can handle the considerable amount of gore, you simply must experience God of War.

God of War is one of the greatest games this generation of consoles has seen. The fact that you are playing it on a PlayStation 2 makes it even more unbelievable. You simply must experience God of War
9 Combat is deeper than it looks Awesome sound and visuals One soul destroying moment near the end A few annoying puzzles

Using the darkly imaginative world of Ancient Greek mythology, the game has…

Using the darkly imaginative world of Ancient Greek mythology, the game has…