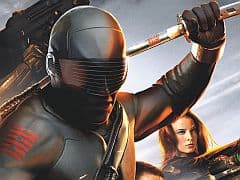 G.I. Joe, you stand before this military court having been charged with multiple war crimes against the Nation of Gaming. You have led innocents astray with the promise of old-school arcade action, when all you have to offer is a tedious carnival of skill-free blasting. You have tormented the public with your appalling camera angles, and with teeth-grinding load times plucked from the days of the PS1. You have exploited our nostalgia for 80’s cartoons and in the process you have stomped all over our rose-tinted glasses. I hereby find you GUILTY and sentence you to death for your crimes. You shall be executed at dawn by a firing squad comprising of Count Duckula, The Defenders of the Earth and Mumm-Ra from Thundercats.

By now we’re all used to the fact that movie tie-ins are usually rubbish, and yet there’s still something depressing about the way this game fails to achieve its own lowly goals. Rise of Cobra sets out to be a light-and-breezy third-person shooter, a sort of 3D Contra homage with added Joe, and yet the final product is almost a textbook example of how not to make a game of this type. For starters, the camera is dreadful: at times it follows the player like a sleepwalker wading through caramel, lazily creeping along as you dash around a corner and into the firing line of enemies you can’t yet see. It’s even worse when you play offline co-op with a chum, as the virtual cameraman has a virtual tizzy about who he’s supposed to be following. One of you will trot into the distance while the other remains stuck behind a piece of scenery in the foreground, or perhaps disappears from view altogether. From time to time the game will even decide to show neither one of you – a democratic solution, perhaps, but hardly an appropriate one.

Then there’s the action itself. Rise of Cobra sees you tackling brief, 10 to 15 minute levels with a chosen pair of GI Joes. In single-player you can switch between your squaddies, with the second Joe controlled by friendly AI, while a neat drop-in/drop-out mechanic allows a second player to join in at any time. Each character has a primary attack, a melee blow and a unique power-up ability – Ripcord can deploy a turret, for example, while Shipwreck gets his parrot to drop grenades on nearby foes. Fans of the original GI Joe cartoon and toys (known as Action Force in the UK) may get a bit misty-eyed at the sight of their old chums, but to be honest they all handle fairly similarly. Whether you’re a heavy-weapons chap, a ninja or an all-round fighter, the objective remains the same: shoot everything in sight, whether it moves or not, and then move on to the next area.

It’s hardly rocket science, but somehow developer Double Helix has seriously botched the job. When you pull the right trigger your Joe will automatically aim and fire at an enemy, but it’s something of a lottery as to who they’ll pick. You can change target by flicking the right stick but you never feel fully in control of your aim, and your hero will frequently refuse to target soldiers that are very close by. There’s a rudimentary cover system, but attempting to fire from behind a wall will often result in you blasting the wall itself, rather than threats in the distance. On foot your controls feel floaty and imprecise, but they seem like the pinnacle of games design when compared to the nightmare of vehicle handling. You’re given a choice of control setups here, but in both cases you’ll find yourself blundering around like a drunk driver, smashing into all and sundry. Once again, this frustration tends to offset the nostalgia factor of being reunited with your childhood jeeps and tanks.

If you’re playing Rise of Cobra on the default difficulty then none of these flaws will halt your progression, since it’s actually impossible to fail: if you die, you just lose a few points and immediately respawn. That’s fair enough, since the lowest setting is undoubtedly aimed at kids and casual gamers – but if you decide to up the level of challenge, you’re in for a rude awakening. Suddenly you’re limited to a single life – a life that is all too easily lost amid the chaos of lasers, explosions and the lumbering camera. And if both Joes should die, you’ve got to start the entire level from scratch.

That’s right, folks. In a spurt of gutsy innovation, Double Helix has pioneered a new feature for the shooter genre: the pointless checkpoint. The action in RoC is already peppered with interruptions, from radio briefings to game-freezing notes about your latest unlockable, but every five minutes you’ll also have to sit through an interval that summarises your score thus far. It’s a thinly-veiled loading screen, with an average duration of around 30 seconds – although some of them seem to drag on for a whole minute. Given that the game looks as rough as a PS2 release – and an early one, to boot – these delays are as perplexing as they are irritating.

Let’s wrap things up now. Rise of Cobra has precisely two things going for it: Firstly, it places lots of emphasis on competitive scoring, so there’s an opportunity for banter if you dupe a second person into playing with you. Secondly, it boasts some amusing audio. The endless bleeps and blams can be fairly headache-inducing, but there’s a loud and catchy tune that plays whenever you activate your acceleration suits – a sort of 30-second overkill mode that can be triggered once you’ve filled up a meter. The game’s script occasionally throws up a decent in-joke, but the real fun lies with the random threats shouted by the Cobra goons. “I am authorised to use lethal force,” mutters one guard, in bored monotone. “Take them! Put them down! Take them! Put them down!” cries another, as if he’s having a go at the removal men.

On reflection, GI Joe: Rise of Cobra has much in common with a hamburger bought at 2am. If you’re in the right mood for it (or if you’re leathered on cheap cider) then there’s a good chance that you may enjoy the first bite or two. It’s sloppy and junky, but perhaps you feel that’s what you want. And then you begin to sober up. You realise that your mouth is filled with undercooked offal, and your stomach begins to churn. It’s messy, it’s stale, and traces of it will linger with you for days. And the worst part of it all? You paid for this garbage.

There’s something depressing about the way this game fails to achieve its own lowly goals.
4 The Accelerator Suit music is ace Massive loading times Dire camera angles All the visual finesse of a squashed hedgehog

G.I. Joe: The Rise of Cobra

Game based on the upcoming live action movie.

G.I. Joe: The Rise of Cobra

Game based on the upcoming live action movie.