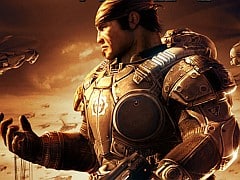 It’s hard to describe the feeling you’ll get after finishing Epic Games’ highly anticipated Gears of War 2. For the best part of ten hours you’ll have had barely a moment’s peace as Marcus and co pummel the seemingly unstoppable Locust army with a ridiculous amount of lead. The more sedate moments would be the climax in lesser games, with the many show stopping set pieces and events setting a new bar for interactive entertainment. Following the most successful original Xbox 360 game of all time was going to be hard, and it seems Epic wanted to make sure no one was left disappointed.

Gears 2 is like every summer blockbuster of note rolled into one extraordinary package. We don’t want to spoil anything for you (believe us – it’s hard not to talk about some of the amazing moments in the game), but it’s safe to say that you’ll be playing through levels that could only have come from the minds of geniuses or the mentally deranged. Apart from one short sequence that didn’t excite as much as we’d have liked, every chapter in the five-act campaign delivers the goods and makes putting down the controller incredibly hard.

As Marcus Fenix you’ll be slamming into cover in Sera’s cities and towns, underground caves, on board boats and more. There’s a tonne of variety too, including some insanely cool on-rails sections and sweet rides. The final level is both a stunning sight to behold and what every Gears fan has wanted to do since the first game. If you thought you’d seen all the Gears series had to offer, think again – you ain’t seen nothing yet. There are moments in Gears 2 that you’ll want to replay immediately, make you grin from ear to ear and stare at your TV in disbelief.

In co-op the experience is even better (and you have someone to turn to with an ‘OMG’ expression on your face when all Hell breaks loose), with team-work being essential on the harder difficulty settings. It’s still only two players, but we never felt that we wanted there to be more despite our initial disappointment that four player co-op wasn’t supported. As before, there’s local split-screen, system link and online support, so unless you really have no friends at all, you should be able to play through Gears 2 how it was intended. And, in a new addition, each player will be able to pick their own difficulty – adjusting weapon damage and hit points accordingly.

Of course, the core gameplay remains as it was, with Marcus being more or less a moving target with ‘shoot me’ stuck to his back unless he’s in cover. Controls are as they were, but moving into and out of cover seems tighter than in the original and there are fewer occasions where he doesn’t do what you expect. Your melee attacks (including the trusty chainsaw) are mapped to B, active reload (enabling you to reload quicker and gain slight weapon perks) is once again RB, and you can interact with various switches and revive fallen buddies with X. If you didn’t like the gameplay in the first game you won’t like it here, but existing fans will love the subtle tweaks to the cover system.

More significant are the new weapons you’ll find in Gears 2, the introduction of portable cover and the assortment of new enemies. Our favourite new weapon is the flame thrower, able to turn Locust into glowing bags of meat, with longer range being awarded for a successful active reload. Enemies carrying the weapon are incredibly dangerous, but target their fuel tank and they explode with quite a bang. Something else that you don’t want to be stood next to for too long is a Ticker. Unless you shoot them from a distance they’ll run up and explode, more than likely taking you to near death – a position from which you can crawl to safety in the hope that a team mate will rescue you, or else you’ll die.

Other new enemies include Locust riding on horse-sized mounts and a brutish flail-swinging monstrosity that carries a shield. You can actually pick up and use this guy’s shield, giving you portable cover, although you’re limited to your pistol weapon when doing so. Still, it adds a new element to the gameplay and makes you feel like even more of a bad ass. If there are no shields lying around, fear not, as you can grab a fallen enemy and use him as a meat shield – although it seems that the Locust don’t care all that much about the safety of their own kind.

Two of the new weapons, the Mulcher and Mortar, will probably be like Marmite to a lot of Gears fans, seeing as they’re incredibly powerful, but leave Marcus quite exposed. The Mulcher is planted on top of cover and unleashes a torrent of bullets that rip straight through the Locust, whereas the Mortar is placed in the open and fires a deadly wave of devastating attacks onto a wide area of the battlefield. The Mortar isn’t the easiest weapon to use, requiring some careful thought to set the required distance, but its effects are worth the effort, especially when faced with enemies like Reavers and Brumaks.

Epic has certainly tried to make the story in Gears 2 more emotional and engaging, and it is, but it’s still more Armageddon than The Matrix in terms of depth. Marcus and the accompanying COGs from the first game are more rounded this time and at least one of the unresolved story threads from the original is tied up here – which, for Gears, is quite a moving and well directed moment. There are surprises aplenty and more loose ends to tie up, but that’s what the third game is for, right? You do thankfully get a conclusion of sorts, giving some form of closure to the conflict on Sera, but we wouldn’t say it’s over.

When Gears of War 2 was announced there was a feeling that Epic would struggle to better the already impressive visuals seen in the first game – in fact, some even claimed that the original was about the best the Xbox 360 was capable of. Well, they were wrong, in a big way. Gears 2 is without doubt the most impressive-looking console game we’ve ever seen. Every scene is packed with detail, the environments look like they’ve been lovingly crafted (no blocky indentikit objects here) and the general art design is incredible. There are standard enemies in Gears 2 that would be climactic bosses in your average shooter and more detail in each area than you’re able to take in – we spent a lot of time wandering about in awe, making sure we took it all in before moving on to a new section.

It’s a real assault on the senses from the word go, with a pitch perfect musical score to accompany the visceral on-screen action. The chainsaw might not be new, but it’s still one of the best melee weapons of all time – so much so that you’ll probably get carried away and go on a chainsaw massacre without a care for your survival, although we reckon one section in the game was designed for exactly this purpose. You just want to carve things up and listen to the sweet sound of Locust dying. It really is hard to knock the production values here. Epic has even included plenty of replay value by dotting war journals around each area, giving you background info on the conflict. You even get updates on how you’re progressing towards Achievements. We’re struggling to think of what else we’d want to see.

Multiplayer came as quite a nice surprise in the original Gears, and Epic has really improved all areas for the sequel. The Player count has risen to five per team over four in the original, there are new game modes (the five teams of two Wingman mode and human capture the flag Submission mode being particular favourites), a five-player co-op mode called Horde, bot support and a brand new party system that makes playing with friends even easier. We know Gears of War multiplayer isn’t as universally appealing as something like Halo 3 or CoD4 (although a multiplayer training mode should help novices get to grips with the basics), but for fans of the original this is a big improvement.

By far the best multiplayer mode is Horde, a five-player co-op mode in which you need to survive against wave after wave of Locust nasties on the multiplayer maps. It’s intense stuff and requires you to work well as a team if you’re going to reach the higher levels. Thankfully the game saves your progress too, so there’s no need to start from level one each time you play with your friends. If two-player campaign co-op was the original game’s key feature, Horde is Gears 2’s surprise selling point – chances are you’ll be playing for months to come.

Some people will no doubt criticise Gears of War 2 for what it’s not. It’s not as emotionally deep as other games on the market, it’s not a 30 hour + epic and it’s not art in video game form, but is arguably the greatest action game ever created. In a year full of incredible games, Gears of War 2 sits triumphantly at the very top.

Gears of War 2 is arguably the greatest action game ever created. In a year full of incredible games, Gears of War 2 sits triumphantly at the very top.
10 Hardly a dull moment Jaw dropping visuals The most intense combat we've ever played Hugely improved multiplayer