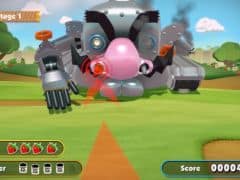 ‘That’s it!’ is a phrase that ends a certain mini-game in Game & Wario. Change the exclamation for a question mark, however, and you’re closer to the truth. Anyone even remotely familiar with the WarioWare series – going all the way back to the Game Boy Advance – will know its true quality resided in how insane it all was. Wario seemed to be off his nut; his cast of supporting characters could’ve been drawn by someone who’d taken a copious amount of drugs and the miniature challenges were quick, frantic and, most importantly, incredibly entertaining. Why, then, has that been completely changed?

Your first thought is probably ‘But this isn’t a WarioWare game’ and to some extent you’re correct. The name is different for one. But when you have the same art style, individuals and, even, sound effects, surely it’s only reasonable to assume it’s set within the same franchise? If we all agree that’s the case, you will be painfully disappointed with what’s here. Out goes the ridiculously fast paced nonsense. In comes a group of slow, unimaginative mini-games that wear thin even after a few minutes of play.

To give you a better idea of what’s happened, let’s cast our minds back to the Wii U E3 reveal. If your memory is constructed of pure power, you may remember Nintendo’s main focus was on a collection of tech demos that showcased what the console was capable of. One saw a man throwing ninja stars from the gamepad onto his television screen. Another focused on some dude hurling arrows at you that could only be blocked by dancing to a musical beat… seriously. The most bizarre of the bunch simply asked you to draw lines on the machine’s touchscreen to exact measurements. As samples they weren’t all bad, but Game & Wario has incorporated every single one and dolled them up by decorating them in the series’ absolutely ludicrous art style.

That doesn’t make them any better, though, and it certainly doesn’t make them any more fun. The opener ‘Arrow’ which, as you may have deciphered, puts you in control of a bow, feels horribly by the numbers, and by the time Game & Wario throws ‘Bowling’ at you towards the end of its unlocking process it’s upsetting to see such a lack of creativity.

Thankfully, there are some highlights. . The return of 9-Volt and 18-Volt bring with them the reassuring mechanics possessed by WarioWare titles of old : quick, stupid chunks of gaming that test both your reflexes and sense of humour. In order to put a new spin on it, however, it also asks you to monitor both the gamepad – where the standard action is taking place – and television screen – where 9-Volt’s possessed mum will sporadically check to see if her son has gone to bed. It’s a constant back and forth as you try to manage two entirely separate concepts, and frustratingly manic, but all the better for it. The same is true, almost embarrassingly, for where Game & Wario asks you to draw shapes. That’s not even a joke. You’ll feel like a fool as Dr. Crygor asks you guess how big a 4cm line is, but there is, somehow, something enjoyable about it.

The biggest problem, mind, is that it all runs out of steam so fast. Without wanting to overdo the point too much, the reason these run of games have existed this long is because they were extremely moreish. Be it because you wanted to stand tall at the top of the leaderboard or simply not being able to get enough of the format, you didn’t want to put it down. I felt done with Game & Wario after a few hours.

I imagine at this point you’re assuming everything is going to be okay because at some point I’m going to mention multiplayer, surely the place where the laughter and joy lives. Well, it doesn’t. A collection of frankly bizarre scenarios, they never get more inventive than asking one of you to hold the pad while whoever else is with you stares blankly at the television screen trying to spot which character the other is playing as. There’s no personality. There’s no sense of urgency. It’s all just so pedestrian.

As disgusting as it is of me to say, if you’re reading this and have a family to play this with then sure, you’ll probably enjoy it more than most. With that said, having kids doesn’t make you a moron, and even you shall eventually tire of what’s here. There’s just not very much depth. As a niche yet popular franchise making its debut on the Wii U, Game & Wario is awfully upsetting.

Moving away from what made WarioWare games so good was a serious mistake.
5 When the old formula returns, it's alright New mini-games are boring No real imagination Multiplayer sucks

Wario and his Diamond City friends are back in action.

Wario and his Diamond City friends are back in action.