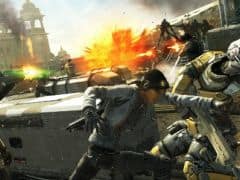 Fuse suffers with Daft Punk syndrome. Originally introduced as Overstrike at E3 2011, the once vibrant, tongue-in-cheek four-player slaughterfest had many heads bopping excitedly upon first arrival. Insomniac Games lead with a well-crafted, smile-inducing snippet that appeared confident of tackling the myriad of generic third-person-shooters with a humourous romp through an interesting Man vs. Evil Corp narrative. With changes afoot since its reveal, Fuse promises the sustained quality of “Get Lucky” and only ever delivers the gaming equivalent of elevator music.

Somewhere along the production line, Insomniac’s initial creativity must have been exchanged for a need to sell games. While you still take control of Overstrike 9’s four individuals, each character feels abandoned during the process of creation. Sarcastic mercenary Dalston Brooks pops off one-liners that feel they were made for another product. Jacob Kimble, an irritable detective who is blessed with the game’s best gun, is only in place to spout meaningless army-guy quips when enemies waddle into the room. Naya Devereux (whose father is in charge of the hunted Raven Corp), and blandly rebellious scientist Izzy Sinclair make up an ensemble that feels like it should feature a walk-on part in Two and a Half Men.

While undeveloped as a storyline, the inclusion of Fuse is a useful gameplay mechanic. Each character picks up an original Xenotech weapon early in the game and is immediately stamped with a unique playing style.

Brooks takes hold of the Mag Shield, a bludgeoning shotgun equipped with a transparent wall that provides cover for anyone within his immediate area. Devereux’s Warp Rifle is useful for any situation that needs men to be sucked towards a black hole. Sinclair’s Shattergun crystallises enemies until they burst, and Kimble’s crossbow -known as the Arcshot- launches firey death across all distances. Loadouts are reinforced with two extra weapons, although assault rifles, pistols, sniper rifles and Uzi-types never match the fun of utilising Fuse-induced gadgets.

Playing alongside three friends, the advancement of Xenotech equipment promotes the use of carefully planned strategy before entering each area. Brooks’ hulking shield becomes invaluable when encounters are constrained to corridors, allowing the entire squad to reach immovable cover away from the splattery threat of incoming bullets. With a spot of levelling up, Kimble is able to propel mined arrows and remotely detonate them; an excellent way to incinerate groups of foes conjoined by a well-placed shot from Devereux’s black hole creator.

Without human buddies, Fuse becomes a different prospect altogether. Your A.I controlled allies have no tactical awareness and often clump together on the same smidgen of cover. They’ll get stuck on the environment’s jagged edges, tell you to take out turrets after you’ve dealt with them, and wander over to doors that need to be opened quickly. When low cover is available, expect to see them standing in full view of the enemy. Instead of following instructional dialogue such as ‘Sweep the area,’ these fools always leave you to do the work before sprinting to the next rally point.

Although useful in gunfights, solo players will need to leap between characters if they are to overcome the game’s many grunts. Any character can be controlled at any moment, meaning you can mix things up when boredom sets in. Unfortunately, Insomniac doesn’t want you to work through the game by yourself so has done its best to lace everything in complete blandness to ensure you get others involved, or move on to something else.

Environments are built in predictable squares, coated in monochrome and lacking creativity. Even when you emerge outside, it’s just minutes before the action suffocates underground once more. Stealth kills amplify both the game’s insistence on using tired formulas and the A.I’s stupidity, as despite being inches away from the opponent you eliminate, Random Goon Twelve doesn’t bat an eyelid. Platform sections are brisk and uninventive, objectives have you defending rooms until elevators arrive, and one of the main villains looks like he should have represented Romania at this year’s Eurovision Song Contest. This boss fight, quite regrettably, even copies the hallucinative Scarecrow encounter from Batman: Arkham Asylum.

Such occurrences underline everything there is to say about Fuse. Insomniac’s initial plan has devolved into a conglomerative representation of the military-shooter market’s complete saturation, a blueprint of unimagination. Although fun with friends, the developer’s first step away from PS3 exclusivity is just one more time around the world of this generation’s most habitual design choices.

Insomniac's first step away from PS3 exclusivity is just one more time around the world of this generation’s most habitual design choices.
5 Fun and tactical with friends Inventive Xenotech weaponry Moronic A.I Generic, repetitive environments