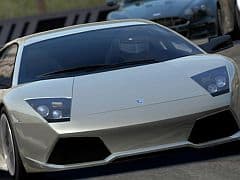 What would make the ultimate racing game? It’s hard to put a finger on the exact ingredients that would blend in such a way to blow away the competition, and even trickier to put into words that special something that just makes the best racing games feel right. You’d definitely need a deep career mode, loads of officially licensed cars, a wide selection of real and fictional tracks, a driving model that can be tweaked to be suitable for just about everyone, gorgeous presentation, top class online functionality and best in class customisation features. Forza Motorsport 3 has all this. It is without a doubt one of the most complete games I’ve played in years. It delivers a sublime racing experience and has that special something. Developer Turn 10 has finally produced the game it no doubt envisaged all those years ago when it set out to create the best console racing sim on the market.

There’s a whole heap of content hidden behind the slick title screen, but what really matters is the feel of rubber on tarmac, the physical weight of your car and the competitive nature of the racing. All the features in the world would mean nothing if the 400+ selection of cars didn’t drive well, if the physics engine was a relic of another era, or if the opponents tootled around the circuits as if on a casual Sunday morning trip to the garden centre. This is where Forza 3 excels. Cars feel connected to the road surface, driving feels smooth and responsive, tyres grip the track just the right amount, your back end will slide out exactly when you know it should, and on the harder difficulty settings you know you’re in a proper race and not a glorified procession lap. You’re not in a real car, but Forza 3 is an incredibly tactile experience, with the game giving a sense of driving that is completely unmatched in the genre.

So what exactly is hidden behind that title screen? Season Play is the core game mode, giving you a series of seasons to race through, each comprised of a calendar of race events that are tailored to your garage of cars. Weekdays are free for you to pick an event from a small selection, with each usually made up of multiple stages set over different tracks. These events play out over a few weeks, with the weekends reserved for World Championship events. Graded F-A, these need to be completed before the more prestigious and lucrative S and R series are unlocked, with the final R1 event requiring you to race in a mammoth 13 races. Thankfully Turn 10 has jumped on the rewind bandwagon, so even if you mess up on that final corner in the 13th race, hit the back button and you’ll instantly go back in time. Using it constantly can feel like cheating, but as a way to avoid frustration it’s a superb addition to the game.

Throughout each season you’ll earn credits for performances in single races and overall placement in events, which can be used to buy new cars or upgrade your existing motors. Upgrading can be as complex or as simple as you like, with petrolheads able to pick and choose the parts and tune more settings than I’m able to comprehend. For many, though, the auto upgrading options will be more suitable, with the game maxing out your car for use in the class of event you’re entering – assuming your bank balance is up to it. There are rewards for staying loyal to a certain car, and it’s incredibly easy to become attached, so thankfully it’s easy to upgrade and downgrade between classes if you need to.

Car and Driver XP is levelled up as you might level up a character in a RPG. Podium position will grant you a set number of credits, a number which is added to by racing at harder difficulties (something that is customisable through a set of options including racing assists and car damage) and deducted from for any serious car damage. As well as going into your overall purse for use in car showrooms and upgrade stores, these points are added to your car and driver XP. Your driver level is persistent throughout, no matter what you’re driving, and you’re gifted new cars for each new level you achieve, whereas car level is specific to each vehicle. You’re rewarded here too, with discounts on upgrades, so it pays to stick with a car you like where possible.

The end result is a career mode that is hugely satisfying and one that never feels like it’s forcing you to do something you’re not interested in. At each new stage you’ve usually got the option to race in an event that uses an existing car, an event that will let you experience new tracks or an event that requires a new car. The choice is always yours, and the game’s subtle hand-holding means you’re never going to be overwhelmed by options or confused as to what to do next. Set to the easiest difficulty I’d imagine anyone could manage to place on the podium, with the game more or less only asking you to steer. For a game as deep as Forza 3, the wealth of options to tailor the experience to your tastes and skill level is incredible. It does truly feel like a racing game for anyone with an interest in cars. You can even compete against friends using their own difficulty settings, so a pro could compete against someone who is playing racing games for the first time – something that few games can offer.

Microsoft and Turn 10 have claimed that Forza 3 features over 100 tracks, which sounds incredible, but the reality isn’t quite so impressive. There are 22 track locations included, although each of these offers numerous track layouts. It’s still plenty to keep you entertained, with most of the variations differing substantially from one another. The classic racing circuits such as Le Mans Circuit de la Sarthe, Suzuka, Silverstone, Nurburgring and Laguna Seca are great to drive, but my favourites are the stunning streets of Fujimi Kaido in Japan, Camino Viejo de Montserrat in Spain and Rally di Positano in Italy. With cars from manufacturers including Aston Martin, Audi, Bentley, BMW, Bugatti, Dodge, Ferrari, Ford, Honda, Jaguar, Lotus, McLaren, Mercedes-Benz, Nissan, Porsche, Subaru, and loads more, Forza 3 seems to have it all.

Outside of the Season mode there’s the expected quick race and time trial modes, complete with leaderboards, viewable replays and downloadable ghost data so you can see where the best players are shaving vital milliseconds off of their lap times. Even if the career mode isn’t keeping your attention, which is unlikely, you could spend a lifetime competing for the top times on the leaderboards. Community has been one of Turn 10’s focuses, and it’s paid off. It’s hard to say for sure how Forza profiles, an auction house for cars and designs, and user rated pictures and replays will be taken to by Forza players, but the tools are there for gamers to spend an awful lot of time away from the driving seat.

Customisation and the lengths people would go to in order to create unique car designs surprised a lot of people in Forza 2, and there’s every chance that this time the community will make bigger and better things. I couldn’t even write my name on the side of a car without it looking like a child’s crayon scrawling, but that doesn’t really matter. I can interact with other users who are talented in that area (able to paint hugely elaborate designs onto vehicles that are real works of art) and use my hard-earned credits for a unique design of my own. Brand new is the video editing suite, allowing users to create their own masterpieces and share them with the world. It won’t be for everyone, but the option is there if you want it.

Of course, on top of the leaderboards, store and community features there’s a competitive eight-player online multiplayer mode. You can choose between circuit, oval, drag (straight races where gear changes are crucial), road racing and drift (earn points by drifting through corners), as well as more party-like modes including PGR classic Cat and Mouse, Tag and Elimination. There are a ton of tweakable options so you can set races up exactly as you want, with whatever restrictions you prefer, be it on car class, upgrades or racing assists. I should point out that extensive testing of the online performance hasn’t been possible, but the races I’ve taken part in have all been lag free and great fun.

It almost seems like a forgotten part of the game, considering the core racing is so great, but Forza 3 looks brilliant. Sure, some of the circuits are a bit bland, but the more creative tracks are full of stunning scenery and beautiful sweeping corners. It all runs at a rock solid, silky smooth 60 frames per second too, giving the game an edge over many of its competitors. There’s a little aliasing, which gives the game a rough look, but it’s minor and will only be off-putting to the most anal graphics snobs. Visual car damage might also be an issue for some, with the damage model used here nowhere near as dynamic as that found in the likes of Burnout Paradise or DIRT 2, but combined with the realistic physics it’s good enough to create some highly realistic looking crashes.

If I’m being picky load times could be better, but assuming you’ve installed both game discs (1.9GB of data on disc 2 contains extra cars and tracks – can be split into 4 chunks if you don’t have enough space but you need a hard drive) to your hard drive the waiting is far from unbearable. Audio work throughout is excellent, though, with on-track sound effects putting you right into the action, while in-menu voice over work does its job superbly. The included soundtrack (indie, electro, drum and bass, and heavy rock) fits with the game’s sleek style, but if it’s not your thing there’s always custom soundtrack support.

Forza 3 doesn’t do anything that’s never been done before, but everything it does do has been executed to such a high standard that it’s hard to find faults – and even those are minor in the grand scheme of things. Never before has there been such a content-packed racing game, playable for people of all skill levels, that feels this good. That’s the key. On the track, no matter what car you’re in, it feels right. You’re not wondering if the controls are too twitchy or if you should tweak some options in the menu. You’re 100 per cent focused on nailing every corner, out-breaking an opponent and taking him on the inside and just having a good time. Turn 10 has created a sim racer that goes far beyond the genre’s usual hardcore boundaries. It’s made a racing game to be enjoyed by just about anyone.

Never before has there been such a content-packed racing game, playable for people of all skill levels, that feels this good.
10 Highly customisable Handling feels great Community features are excellent Looks superb