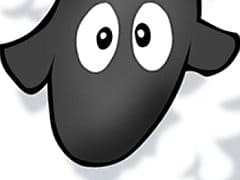 Flock! Is a game that wants to be loved. The quirky art style and annoyingly catchy theme tune make for a great first impression, the kind you’d expect to have of a game from Capcom. This XBLA, PSN and PC game isn’t quite the puzzle game it could have been though, let down by some less than perfect controls, problematic physics and some basic design flaws. At a high price of 1200 MS Points/£11.99, are these issues enough to veer you away from the buying herd?

The premise behind Flock! is a remarkably simple one. You control an alien space craft, for some reason on a mission to round up sheep, cows, chickens and pigs. You do this by using your detachable small space ship as a flying sheep dog, pointing the animals in the direction you want them to move, while not having any direct control over where they go. As we’re dealing with farm animals here, the settings are very rural, with fields, fences, water, poop (yes, poop) and even the odd creature that comes out at night. It’s kind of like how claymation duo Wallace and Gromit would run a farm, complete with the craziest contraption the industry has ever seen.

To begin with things are simple fun. You manoeuvre your ship around, getting its beam of light behind the sheep in order to direct them towards your big ship and their abduction. Before too long you’ll be introduced to gates, which block sheep from passing, but handily water fountains are on hand to get the sheep wet, shrinking them down to a size small enough to fit through the gaps in the fencing. Pass through this water and it’s then simply a case of directing them with some smooth ship flying.

As we said, it’s simple but decent fun. Things soon become a lot trickier though. For one, sheer drops are introduced, meaning that if one of your animals is pushed near the edge it’ll slip off and forever be lost in the lovely looking water that surrounds each island-like level. Adding to this misery is the fact that shrunk sheep manage to get into gaps that aren’t obvious, so while they are normally happy to be bullied along a line of shrubs, the little fellows are shoved through to their deaths. It’s not pretty.

Sheep are joined by cows (able to barge through fences and activate catapults), chickens (which fly when pushed off cliff edges) and pigs (which roll around and love to play in the aforementioned poop). This lot often need to be used to solve each level’s mild puzzle elements, such as a string of fences that a cow needs to plough through in order to clear a path for the trapped sheet. Even more gameplay mechanics are found later, with certain animals being so attractive to the rest that they’ll act as some kind of farm animal tour guide, pulling the others wherever they go. You even get some upgrades to your ship, with two kinds of tractor beam helping you interact with objects in the levels.

Flock’s biggest problem is just how fiddly it all becomes. The animals occasionally go where you want them to, but they’ll often seem reluctant to move or wildly veer off to one side and towards a chasm of doom. We lost count of the number of times we had to restart levels after a flock of sheep managed to shuffle into the awkwardly placed pits as if our scary beam of light didn’t even exist. What’s more, with the beam always on, if you overrun a group of animals and want to get back behind them, you can’t simply reverse as doing so would send them back in the opposite direction; you need to do an exaggerated loop to get back to where you need to be.

From a purely visual perspective Flock! looks really nice, with a level of presentation that we don’t often see in download-only titles. There are even some well implemented physics, with many items in the levels able to be battered with the cows or moved with your tractor beam. Sadly the music does grate way before the end arrives and your animals seem incapable of moving past fences that have been knocked over – something that is initially an irksome quirk, but soon becomes one of the biggest fun-destroyers in the game.

There’s a decent two-player single-system co-op mode on offer, but it feels like a token gesture given how quickly you’ll finish the levels on offer, and the level creation tool is a good idea but we doubt many people will stick with it long enough to create much worth shouting about. It’s all a bit sad really. Flock! is an enjoyable game when it all works, but it’s far too easy to encounter one of its many soul destroying problems that’ll make you wish you were playing something else. It’s certainly something quite unique on the current crop of systems, but that doesn’t stop if from being a disappointment.

Flock! is an enjoyable game when it all works, but it's far too easy to encounter one of its many soul destroying problems.
6 Looks great Initially good fun Irritating gameplay issues Can be finished in an afternoon