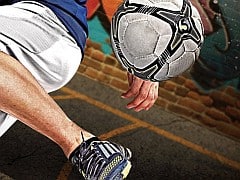 Last week, Lionel Messi became the first player ever to score 5 goals in one Champions League match. His performance didn’t only embarrass a handy Bayer Leverkusen outfit, it epitomised why EA poached his face from Konami’s faltering Pro Evolution Soccer franchise. The Argentinean, despite his beautifully conditioned hair, poses the most prominent threat in football today. His performance couldn’t have been better timed, showcasing all the traits EA has worked hard to instil in this much-anticipated reboot. As any Thursday night footballer knows, nothing is more important than humiliation. Little Leo’s debut in EA colours is symbolic of this, indicating the all-or-nothing style of FIFA Street, and turning the competitor’s cheeks a rosy shade of red in the process.

Importantly, EA has finally gotten serious with this title. Shifting away from the jovial spirit of FIFA Street 3, a glut of changes has been implemented to ensure this isn’t a lazy sideshow to the main attraction. Players no longer take on the form of caricatures, so you won’t be throwing the bicycle frame of Peter Crouch against a particularly bullish Carlos Tevez. Guaranteed super-goals have been dismissed, exchanging over-the-top back flips and rainbow coloured trails for a realistic approach. In terms of austerity, if the last game takes on the persona of Steve ‘wally with the brolly’ McLaren, this sequel shudders with the stern glare of Stuart Pearce.

This measured approach allows the series to evolve into a genuinely enticing football game. With smaller goals and tighter pitches to play on, precision is absolutely key. While tricks are a huge part of your arsenal, they act as a sighter for your attack, providing momentum for a thoughtfully triggered offensive move. We can all roulette around an opponent, or flick the ball over his head with a push of the right stick, but the real test comes from stringing everything together into an effective barrage on your opposition’s goal. For the first time ever, alongside the tomfoolery of pulling a rival’s pants down, an emphasis is placed on playing effective football.

With this in mind, FIFA 12 fans will feel instantly at home. The Player Impact Engine and Tactical Defending system make a welcome appearance, although they have a completely different role than in FIFA Street’s older cousin. Instead of formulating complex defensive manoeuvres, you’ll be constantly trying to halt the other team’s momentum with minor disturbances. A quick shoulder barge can knock them to the ground, or a dig at the ankle can throw them off balance. By dragging players back into your half, complete suffocation often shuts down any impending threat. Persistence is vital, rewarding those who rabidly niggle at the enemies flow with a consistent stream of possession.

Authority starts with the physical battle, but taking control of the ball is where the big points are scored. After a few touches, it should be apparent how subtle FIFA Street’s movements are. Every tiny step has the potential to carve open an opportunity or to create a route at goal. Players surge forward aggressively, trying to take advantage of any free space. Quick-thinking is necessary, as in most cases the chance to play a killer pass evaporates within a few seconds. Needlessly give away possession, and expect your opposition to unleash a sweeping break that punishes your sloppiness. Losing a game is entirely your fault, and not because Cristiano Ronaldo has jumped 20 feet off the ground to smash home a ridiculous overhead kick.

This sense of realism is echoed throughout the entire product. Players only perform tricks that seduce audiences in real-life, making each feat far more impressive. Like real street football, the Panna (or the ‘nutmeg’ as it’s commonly known) is the ultimate mark of humiliation. By pushing the ball through another player’s legs, you’ll receive the plaudits of the crowd and a huge point boost.

Although showboating isn’t essential for most game modes, learning this kind of technique is pivotal to your progression in World Tour. This is where your single-player journey takes place. After creating your trickster, or importing an existing pro from FIFA 12, the action begins on a tiny scale. Selecting your region is the first step on a challenging trek across the globe.

Excellently, your opening matches take place in small towns around your area of choice, making you feel instantly at home. In real life, I’ve played plenty of matches on the artificial pitches of Maidstone, so to see the area pop up in the game is a lovely bonus. Even better, any friends with a virtual pro can be downloaded into your squad. Within seconds, you can take to the arena alongside your actual teammates, in a realistic location. Sure, the first few matches are hosted in a generic area, but it indicates how FIFA Street considers the locality of street football like never before.

World Tour also serves as an excellent introduction to all match types on offer. Alongside 5-a-side and 6-a-side tournaments, you’ll enter competitions that force you to change your style of play. Last Man Standing eliminates anyone who scores a goal, with the first team to have no players left emerging victorious. Tricksters will delight in Panna rules, where skill and flair build up your score. The only way to cash your points in is by sticking the pig’s bladder away. If the other team steals the ball and smashes it into the net, they will yoink any progress away from you. Futsal also makes an appearance, ushering in rules and referees at the same time. All of this amounts to an extremely diverse title, one that forces your team to continually evolve with the conditions set.

Player growth is hugely important to the overall shape of your team, as individuals take on specialist roles. Those who get the balance correct generally end up with the win, as there’s little point having a team crammed full of defenders who can’t finish the ball. One second you’ll be taking part in a 2-on-2 freestyle match, while the next you’ll be thrust into a ‘proper’ 6-a-side bout.

Although certain members of your team may warm the bench, it’s important to ensure they have a use in at least one type of competition. If they don’t, the opportunity to exchange them arises after you succeed in any friendly encounter. Beat a team like Barcelona or Manchester United in a single event, and the chance to nab one of their players (from a choice of 3) shows itself. Unfortunately, it’s more likely to be Fat Boy Anderson than Fat Boy Rooney.

As you progress, plenty of new kits, clothes and accessories become available for your pleasure. What’s the point in flaunting skill with the ball if you don’t have a baseball cap tilted to the side? Typically for EA, fully licensed Adidas, Puma and Nike products ensure you’ll be looking fresh to death. Each individual on your team can be fully customised, meaning you can outline your star striker with a flash pair of red boots while the rest trudge round in brown shoes from the bargain bin. Products are unlocked with greater experience, but thankfully, the only boost they provide is to your ego, and not to your statistics.

Taking your team online, plenty of potential for drama arises. Like FIFA 12, a season mode is included, tasking you with reaching a certain amount of points in a handful of games. Unfortunately, a mini-version of Ultimate Team hasn’t been included. It would have been amazingly fun to trade players on an actual transfer market, but instead, EA has opted for a multiplayer formula that doesn’t have much ambition.

With this said, my online experience has mostly been smooth. Even the slightest hint of lag makes pulling off tricks infuriatingly difficult, however, so it’s important that both connections can handle the pressure.

FIFA Street finally realises the potential of a franchise that was lacking identity. By eradicating any silliness from the past, EA has crafted a thoughtful, challenging and consistently entertaining title that celebrates the nuances of football. Messi’s appearance as poster boy is not coincidental to the sudden increase in quality, as FIFA Street strikes an enticing balance between trickery and an all-round solid game. As an attempt at relaunching the series, this game bodes well for the future. Like the brutal motto of Roman Abramovich, change is good.

EA has crafted a thoughtful, challenging and consistently entertaining title that celebrates the nuances of football.
8 The serious approach indicates a bright future Considers the roots of street football through arenas Excellent control and emphasis on playing solid football Online should be more ambitious