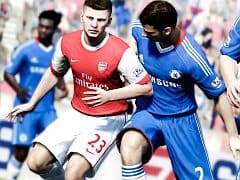 Forget what you know about FIFA. While EA has been keen to highlight how much of a change this year’s game is going to be over the previous iteration, there have quite rightly been some sceptics, confident that it’s just marketing speak covering up fairly minor changes. It isn’t just marketing. FIFA has changed.

For the first few hours, if not days, FIFA 12 feels wrong. Your brain will struggle to adapt to the new Tactical Defending system and you’ll get trounced. “Have EA broken FIFA?” you’ll mutter to yourself while on the end of yet another hiding from West Brom, and there’ll be many more head-in-hands moments in the matches that follow.

Thankfully, as if out of nowhere, things start to make sense again. You’ll have got things sorted both in your mind and your fingers, now having to do things alien to them after years of being groomed by EA Sports’ mild evolutions. You’ll finally understand (although be nowhere near to mastering) the new jockeying, contain and tackle system, and begin to appreciate how FIFA 12 feels like a new era for the franchise. The naysayers were, thankfully, very wrong. This is the biggest risk EA has taken with FIFA in its long history. Meddling with the established order of things can’t have been an easy decision, yet it’s paid off big time.

The new way defending is handled in FIFA 12 turns what was, for a lot of players at any rate, a fairly mindless part of the game into an area that requires full concentration and a lot of skill. Whereas in previous FIFA titles you could use the tackle button to home in on the player in possession and then harass them until winning the ball, FIFA 12’s default system is built around jockeying and timing. When you hold down your previous favourite tackle button your defender will no longer go in to win the ball – he’ll just track the attacker and remain a few feet away. The tricky part is how you then go on to win the ball.

Key to defending is moving from this holding position to a full-on tackle in an attempt to win back the ball. Time your button press badly and the attacker will walk past you as if you’re not there or you’ll ram into them, committing a foul. Try to tackle conservatively from behind and you’ll barge and tug at an attacker, which can prove to be a decent way to hold back (quite literally) a player through on goal, but you’ve got to be prepared for the consequences should you step over the mark. I’ve seen numerous red cards and penalties awarded against me. It’s also a valid technique to simply push into players, using your defender’s superior strength to hustle the attacker off the ball.

Sliding tackles, often neglected by FIFA players, play an important role this year too. With the auto-tackle button now disabled the ability to perfectly time a slide to clear the ball or dispossess an attacker is a skill as important as being able to find the top corner. As expected, the most skilful players are harder to tackle, so simply standing your ground and forcing them sideways proves to be a great tactic and avoids the danger of lunging in and letting them skip past. Against a skilled AI team you’ll likely still get schooled on anything higher than semi-pro while you’re learning, so bear that in mind if you’re a World Class or higher skill-level player on FIFA 11.

It’s perfectly conceivable that some FIFA players won’t like the new Tactical Defending on offer in FIFA 12. You can turn it off and use the system found in previous games, but to take part in proper online competition you’ll need to be using the new system. There’s no denying that Tactical Defending takes a lot of getting used to, but the effort is worth it. Games against AI on higher difficulty levels are still beyond me, but the game feels fresh and new when played against a human opponent. Matches play out in a more realistic fashion, with attackers able to go on runs, but actually making that decisive breakthrough on goal is harder than ever.

Going hand in hand with Tactical Defending is the Player Impact Engine – something which EA claims is the biggest change FIFA has seen since it arrived on this generation of consoles. Having seen this earlier in the year and been incredibly impressed I expected a lot, but in action in FIFA 12 it’s a lot more subtle – an improvement over what we had before, but not initially hugely noticeable. There are certainly glitches that cause players to react in bizarre ways when they collide, but most of the time body parts are pushed, pulled and knocked about in a way that gives the game a more realistic look and allows for more fluid gameplay.

Actually scoring when given the chance depends heavily on the player in possession, but against good teams it can prove to be incredibly tough. When you do nail a shot and see it fly in off the post the sense of satisfaction is just as great as ever, and it’s possible to score some real beauties while holding down the skill modifier – even if it can result in disaster a lot of the time.

It’s fair to say FIFA 12 is at its best when played against real people. AI annoyances go out the window and you’re left with a far more enjoyable football experience. It’s no surprise then that EA has clearly focused more on this competitive side of the game, offering an absolute tonne of online game modes. New this year are Head to Head Seasons and Online Friendlies.

Head to Head Seasons puts you in a league and gives you 10 online games to try and earn enough points to get a promotion into a better league, pitting you against tougher online opponents. Online Friendlies gives you a way to make competition with friends more regimented, deciding who is the best over a 10-game season. Neither is likely to cause too much of a stir, but it’s good to have more options.

In terms of new features in the online space, EA has added loads to the social side of the game. You have your own rank, levelled up by earning XP through playing the game, and this can be compared to friends and rivals online. There’s also a global league based on the teams FIFA 12 players support, with the average XP scores being worked out to create league tables. At the end of each FIFA 12 season there’ll be promotions and relegations, meaning that everything you do while playing counts for something.

FIFA Ultimate Team has also been included out of the box, rather than coming as DLC. Here you start with a basic team of players and can then earn points through playing (and trading player cards) to build up a better team and improve team chemistry. Even losing games earns you points, with shots, corners and more all adding to your tally – while playing against stronger teams adds a bonus multiplier. It’s a game mode that has proved so popular that the best teams have been sold on eBay for small fortunes, and there’s no reason to think it won’t be just as successful in FIFA 12.

While FIFA 12 includes an improved Career Mode, complete with a tweaked youth academy and scouting system, the various options here still feel lacking. Playing through a career as a single player suffers due to the AI’s poor managerial decisions. As Luca Modric for Tottenham (although I chose to take control of the entire team during games), I had to sit back and accept that the manager was playing Scot Parker as a striker and repeatedly subbed the team’s best players before half-time. Taking on a management and playing role is far better, but the transfer negotiation side of the game is so basic it’ll frustrate anyone who has dabbled with a proper management sim.

Injuries and recovery from injuries has been handled very well, not only thanks to the way incidents look more realistic but also in how problem areas can be aggravated when players return. If your winger gets clouted on the knee while recovering from a knee injury, chances are it’ll be made a lot worse. It’s not exactly a revolution, but having to think carefully about who you’ll pick in your starting 11 adds another level of realism to the experience.

As ever, presentation is top class here. The menus, pre-game practice arena, team montages, soundtrack, crowd chants, and all the rest are superb. The EA Sports Creation Centre is also back, now with more features and bonuses for Season Ticket holders. More important is how good the game looks on the pitch, with EA once again making a genre-leading sports sim. I’m a little disappointed by some of the player likenesses, with only the top clubs getting a full suite of accurate models – Tottenham, for example, suffer from a number of rough approximations that aren’t as good as those seen in PES.

Player faces aside, there’s very little to complain about. The lighting is excellent, animations are top notch and made even more realistic thanks to the game’s new physics engine, and no other game has all the official kit licenses. Not so brilliant is the somewhat random commentary, which once again suffers from the pair failing to accurately read situations, often with comical results. It’s also a shame that there’s no licensed Champions League here, which can only be found in PES.

I booted up FIFA 11 to gauge just how much has changed and the differences really are quite striking. The Tactical Defending feels entirely alien to begin with but stick with it and it makes FIFA 12 feel like a brand new, and more realistic football experience. The King is dead. Long live the King: FIFA 12.