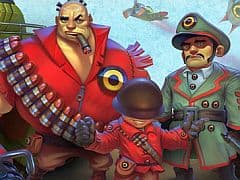 Prior to 2007, I don’t think I’d ever played a tower defense game in my life. Then, during one particularly bored lunchtime at my old job, I stumbled across the excellent browser-based Desktop Tower Defense. My work rate was less than stellar before this discovery, but from that point on my performance plummeted. I’d waste entire afternoons playing DTD, completely ignoring the deadlines that piled up around me like discarded food packaging (there was plenty of that on my desk, too). Long story short… I don’t work there anymore.

Over the past few years hundreds of free tower defense offerings have sprung up across the internet, and quite a few of them have made the jump to consoles. The theme of the game varies, but the action is always the same: enemies come swarming across a 2D battlefield, viewed from above, while the player builds a maze of turrets to blast them. Each defeated bad guy earns you money to upgrade or build new towers, but the game ends if too many foes manage to cross the screen. That’s all there is to it, but addiction comes swiftly – and when it grabs you, the hours fly by like minutes.

Fieldrunners does little to mess with this well-trodden formula. For this version you’re targeting hostile armies, rather than the popular choice of blobs or alien insects, but everything else is inherently familiar. Even the basic towers are instantly recognisable: there’s your bread-and-butter gun turret, the cheap option that’s best used to block your enemies’ path; a goo tower that slows people down; a long range missile launcher; and a high-power Tesla coil with a limited attack rate. In the default standard game your aim is to survive 100 waves of increasingly tricky invaders, but as you progress you’ll unlock two other modes that restrict the number of towers you can build, or that pit you against an endless procession of attack waves. Progress also unlocks four new maps and a handful of new turrets – including long-range mortars, and a laser that can cut across the entire battlefield.

This PSP Minis release has two major feathers in its cap: for a start it’s an upgraded port of a game that was well received on the iPhone, and on top of that it’s the first game of its kind to hit the Minis range. If you don’t already own the not-too-dissimilar Pixeljunk Monsters, then this is certainly a viable cheap alternative. The graphics are colourful and solid, if unremarkable, while the soundtrack offers the right mix of blams, screams and background music, but it’s the pure gameplay that’s the key draw here. It’s hard to say exactly what it is that makes this genre work so well, but for some reason it is immensely satisfying to watch a chain of enemies crawling to their deaths through your Dastardly Maze of Doom. Crafting an efficient labyrinth takes real skill, too – and the time spent honing your preferred layout will further fuel your addiction.

In terms of drawbacks, I could point to the lack of a multiplayer option, or to the relatively limited number of alternative game modes. I also got slightly irritated by the fact that the option to upgrade a turret is adjacent to the one that sells it – as in the heat of battle it’s quite easy to hit the wrong direction on the d-pad. On the other hand, since Fieldrunners lets you build towers while the game is paused, there’s less need to make such decisions hastily. In any case, neither of these things hold the game back. Fieldrunners doesn’t do anything to advance to the tower defense genre, but if you’re a PSP owner looking for a budget slice of real time strategy goodness, it’s just what the doctor ordered.

Fieldrunners doesn't do anything to advance to the tower defense genre, but if you're a PSP owner looking for a budget slice of real time strategy goodness, it's just what the doctor ordered.
8 Hugely addictive A great example of the genre Brings nothing new to the table No multiplayer

In Fieldrunners, your goal is to defend and control a field using…

In Fieldrunners, your goal is to defend and control a field using…