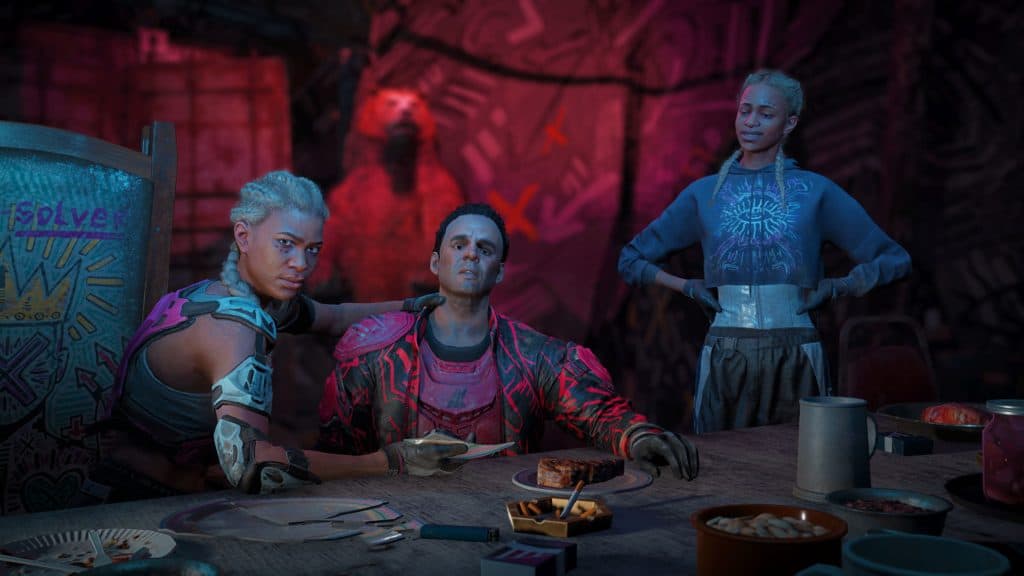 Almost 20 years have passed since the events at the end of Far Cry 5 saw Hope County – SUPER MASSIVE BIG SPOILER THAT HAS BEEN SPOKEN ABOUT AD NAUSEUM IN THE BUILD-UP TO THIS GAME’S LAUNCH, BUT STILL – reduced to a smouldering heap after a nuclear bomb signalled the end of the world. Although, video games have taught us that the post-apocalypse is an ideal avenue for highlighting how life can be rebuilt after such a cataclysmic incident in an open world FPS. Sometimes it can even prosper, in both the beauty of its surroundings and the spirit of its people. The rejuvenated rural backdrop of Far Cry New Dawn isn’t just a pretty aesthetic, though; the systems have been reinvigorated, too.

Your HQ – unsubtly named Prosperity – is where the restoration effort begins, because before you can rebuild the world by taking out those who oppose, you must craft munitions and vehicles. There are no shops to buy fancy new shotguns from or showrooms housing wheeler dealers eager to hawk you a Volkswagen Passat you can’t afford, though. Instead, you have your workbench to craft makeshift assault rifles and a garage to cobble together new cars. There’s no shortage of materials sprinkled across the map, either, so you’re rarely short if you just glance each area you visit.

Constructing tin can playthings is a wonderful way to give weapon obtainment some weight; you’ve worked for your new sniper rifle, so you’ll damn well enjoy popping heads with it more than you would if money had changed hands with some Axl Rose-looking fella behind a counter. The saw launcher is the star attraction, here, seeing you fire razorblades at your foes, bouncing off surfaces like a four year old after slugging a can of Fanta: it’s fantastic. If anything, your arsenal is a little too subdued, chock full of the cookie cutter arms rather than more excellenty ludicrous murdering gifts. Bettering your tinkering spots is paramount to progression, though, and that comes by way of ethanol. 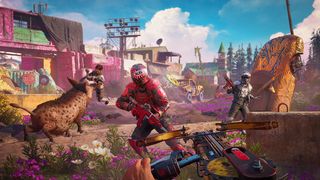 Ethanol is liquid gold in the countryside: it’s what’s used to buff all sections of your base, including the aforementioned workbench and garage. A superior infirmary ups your health; a greater training camp improves your guns for hire pals; and an enhanced cartography shows points of interest on your map – this is on top of the returning perk system that gloriously rewards you with skill points from beginning to end for effectively just interacting. With three tiers of upgrades to each facility, you’ll want to grab as much ethanol as you can, and the best way to do that is by taking out outposts.

A Far Cry staple, the core loop flourishes at these heavily guarded stations. Achievable stealthily, as tension ramps up with every silent takedown, and more often than not a story told in two parts after you’ve been spotted and the alarm is raised. A successful mission means a splash of currency for your camp, but the twist this time round is that you can scavenge an outpost for more, relinquishing the site to higher-powered enemies ready to take on once again. The more brutish baddies, like your Frankenstein productions, are denoted by colour: grey=level 1, blue=level 2, purple=level 3, gold=level ohsweetjesuschrist. You want to partake in the vicious cycle and down the more advanced adversaries, then, you better get assembling. It’s a refreshing tweak that was necessary in a formula that was running a bit stale.

A completely new inclusion, albeit one that doesn’t reinvent much, is Expeditions. These arenas are detached from the main story by taking place in other locations: a sandy desert, an abandoned amusement park, a docked tanker. They’re decent. Whilst the visual change is nice, they’re effectively outposts you must infiltrate in order to grab an item, and then escape. It’s just not as enticing when you’re absorbed in the burnt-out pleasance of Hope County. Treasure Hunts, though. Now there is where Far Cry New Dawn gives you the good stuff. 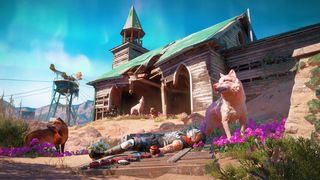 Called Prepper Stashes in Far Cry 5, these are where developer Ubisoft Montreal can play with the tried and trusted, offering more puzzle-based play. You’ll scale the elevated remains of a derailed train with your grapple, shoot targets to unlock doors, follow notes that direct you up river. The only shame with these is that there are only 10. After completing the final one, I wanted more. Some of that variation has seeped into the main missions, too, with gunplay – granted, still what brought Far Cry to the dance and keeps its feet moving – sometimes taking a backseat to a more alternative structure when up against the Highwaymen.

Adorned with dirtbike duds and scowls, the Highwaymen, led by twins Mickey and Lou, are drawn to Prosperity after hearing of your relatively reclaimed riches. From the off, they simply want to know if you’re problem solvers or problem makers: it’s simple, yet effective. The sisters are suitably menacing, but do have a somewhat sympathetic backstory that’s touched on briefly over the course of New Dawn. It adds another wrinkle to what they’re doing, and would’ve boosted the narrative further if it was fleshed out more. As this follows on from Far Cry 5, there are plenty of characters from 2018’s series entry here, too, with a varying degree of success; let’s just say I would’ve been happy enough to see doomsday take a couple of the secondaries.

Far Cry has wrestled with the supernatural before, with fluctuating results. I appreciate where it’s taken in New Dawn, however. They’ve just gone ‘fuck it.’ About two-thirds through something happens that gives you new abilities that are just… yeah. In many ways, it’s the natural evolution of madness, and I for one am all for it. To delve in any deeper would be to ruin it, but know that it’s insane and an absolute pleasure. It goes a little too far by the end boss, which is an affront to everything bosses in games should be in 2019, but what you become is a delight. 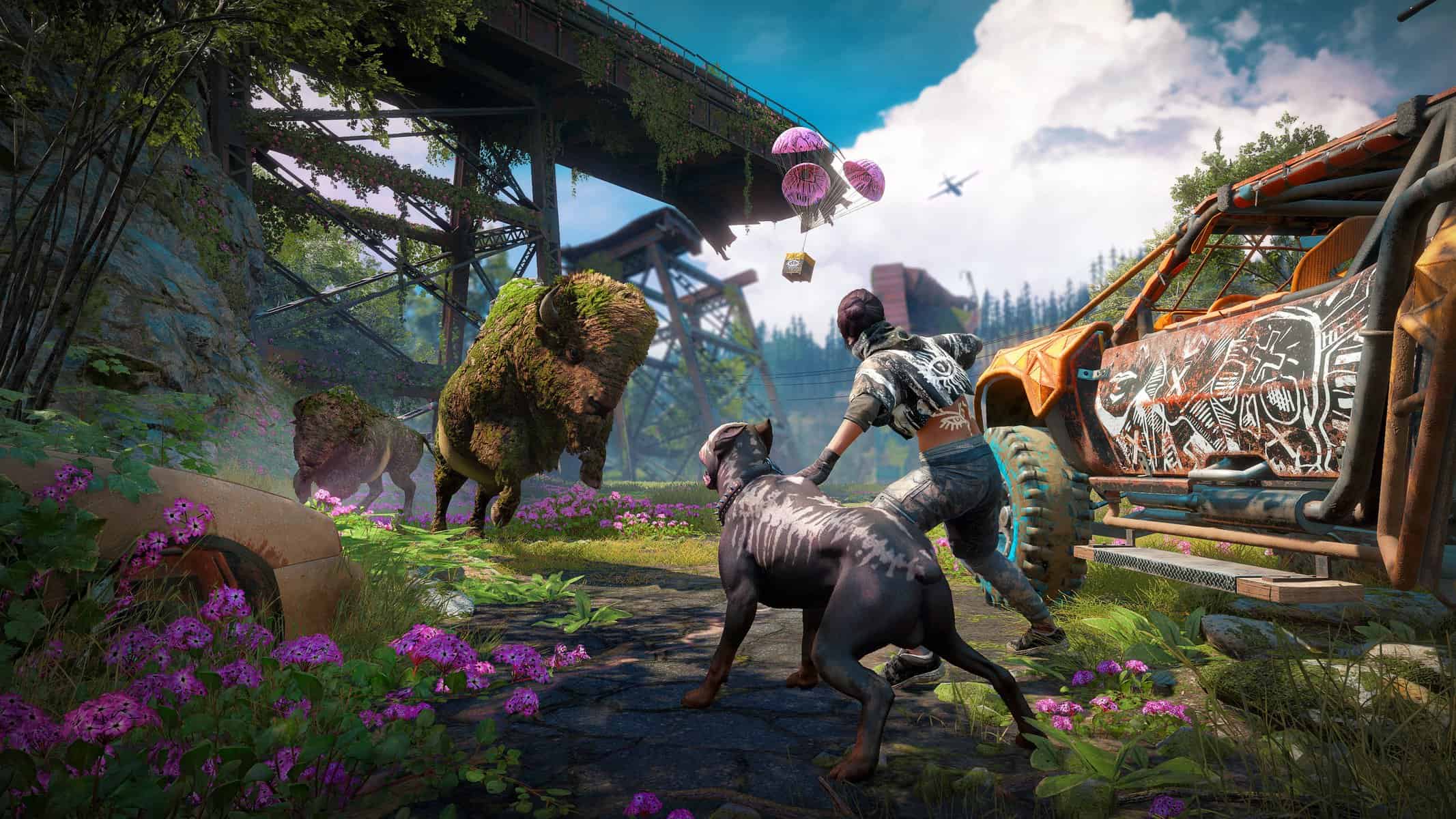 For a while now, the Far Cry model has seen a sort of half-step launch in between numbered installments – after 3, we had Blood Dragon, after 4, we got Primal – but this is the first time the stopgap has advanced the fiction of its predecessor. The issue here is that, as the lack of a digit suggests, this is more Far Cry 5.5. As entertaining as it may be in areas, there’s an air of fatigue blowing through the rolling hills of gorgeous greens and pretty pinks.

Far Cry New Dawn can be boiled down to one simple question: did you like Far Cry 5? If yes, play this; if no, probably skip it. Those in the former will welcome the slightly adjusted recipe for destruction, of which there’s still clearly an appetite for. Sure, it’s more midquel than proper sequel, but the Treasure Hunts are still joyous, and the new ranking and crafting systems freshen things up enough to make Far Cry New Dawn a worthwhile reason to revisit Hope County.

Far Cry New Dawn is your regularly scheduled stop-gap Far Cry, with some lovely tweaks like the ranked enemies and weapons, and a fantastical element that reaches its natural conclusion.
8 Man, that core loop is great Treasure Hunts are as wonderful as Prepper Stashes were Ranked enemies and weapons is refreshing It’s been less than a year since Far Cry 5 and this feels like a half-step in ways. 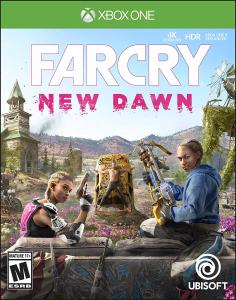