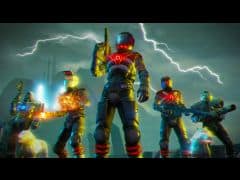 doing a kickflip while wearing wrap-around sunglasses and listening to Turtle Power,

Blood Dragon plays things pretty conservatively. If you saw the marketing and

apart from just using the name, like using someone elses’ ID to buy Predator on VHS

– you’ll know after a few minutes play. For all of the impact the new visuals have –

is still Far Cry 3, just remixed, rejigged and streamlined to accommodate a faster

In Blood Dragon, you ARE Sgt Rex ‘Power’ Colt, and THIS SUMMER, you WILL kill

everyone and everything, in a moody, post-apocalyptic America that has been

this version of 2007 the US and Russia have nuked themselves silly, and now only

Rex can stop a rogue US soldier creating a new world order. With dragon blood and

Predator’s Long Tall Sally, the first of many, many movie references. If it came out

than his body, then it’s here. Anyone who grew up on a filmic diet of steroid-addled

MurderDeathKill will feel right at home, with a terriffic soundtrack rounding it all off.

As befits an ass-kicking cyberwarrior from the future, Rex couldn’t be more different

to that communist Brody, and as such while the core of the game is the same –

travel around, hunt animals, liberate bases, sometimes actually do a mission – the

way in which Rex levels is different. There’s no time to be wasted crafting wallets

and backpacks here. Instead, the (cyber) animal hunting, item gathering and

system. It has to be far more linear than Brody’s tattoo tree, and it is.

In fact, I’m tempted to say that I prefer the way it’s done here. Your XP bar fills

with every radical thing you do, and your new weapon set (which includes a

minigun) lets you wreak havoc in a way that wasn’t really possible before.

Exploration, too, still has the same OCD-bothering appeal as before: I found myself

trekking around, attempting to track down VHS tapes and TV sets to boost my

stats and unlock cool new gear for my weapons.

So: it’s Far Cry 3, but with Terminator/Aliens star Michael Biehn spouting one liners,

8-Bit graphics panels telling the story and everything exploding all the time. Which

is wonderful: Ubisoft’s open world is a great template to work from, and Blood

Dragon is a lot of fun. If anything my main concerns come from the fact that

Ubisoft doesn’t go far enough with the nonsense. The developer has pulled

inspiration from dozens of movies, each of which are little more than bullet strewn

set-pieces of increasing intensity. So it’s a shame that in Blood Dragon you’ll be

repeating the same general mission loop from the start until the end: go to place on

Given the sheer silliness of its inspirations, Ubisoft could have done anything here,

and repeat the mission structure is a bit of a blow, especially in a game so over-

the-top. For all the lip service paid to how spectacularly stupid the game is, this is

still Far Cry 3. You still have a bow, and weapons still run out of ammo (has Ubi not

seen any of these films? Weapons never run out of ammo.)

Speaking of your guns, why is there still a weapon limit? Anyone that has seen

person, as long as he believes in America. Similarly, why do defeated goons just fall

over when shot? Why aren’t they pirouetting and backflipping like an episode of the

A-Team where the bad guys are the Russian Ballet supporting Diversity on tour?

Other issues compound this problem. The perma-dark nature of the world offers

little variety and the Blood Dragons themselves are pretty boring, both in design

and combat, which is a sentence that should never be written.

It’s slightly disappointing, but I found myself returning to Blood Dragon after I’d

finished it. The compulsive appeal of the parent game carries over, and it’s nice to

play a sci-fi shooter that’s not trying to tell a so-called ‘epic’ story. Here you shoot

people, a lot, and for most of its short running time that’s good fun.

Finished the campaign and half the side missions in around 4 hours.

Slightly disappointing, but the compulsive appeal of the parent game carries over and it's nice to play a sci-fi shooter that's not trying to tell a so-called 'epic' story.
7 As addictive as Far Cry 3 Soundtrack is good Not enough mission variety Not OTT enough