Having recently attended a concert at which the Fallout score was performed to an audience that revelled in the radiation of shared nostalgia, I started Fallout 76 with a ready-warmed communal spirit. It quickly cooled. These last few days, my interactions with fellow wanderers have consisted of silent tolerance, the avoidance of eye contact, and a bustling determination to go about my own business. There’s more camaraderie in my morning commute.

The good news, for the impatient and the solitary, is that the best thing in the game comes early and is ideally enjoyed alone. As you emerge from the vault, you’re greeted with West Virginia, in 2102. It’s a welcome change to the wastes of the Beltway and Boston, where, over 150 years later, Fallouts 3 and 4 took place. Here, nuclear winter is swapped for nuclear autumn; the trees have turned russet red and copper, as if nature, along with metal, has begun to rust.

Appalachia, as the main stretch is called, is vast, approximately four times the size of Fallout 4’s wasteland. In a refreshing jolt, the map is printed on a holiday-maker’s pamphlet, informing you of all the attractions before you visit. You’re a typical tourist, best served stretching your legs. When you do, you’ll find that the broken bones of its cities are still half-draped with skin. Brickwork and windows are in better fettle than we’re used to, and there are even people – sort of. There are carbonised bodies, threaded with glowing green veins and posed like mannequins, frozen in their final moments. Like most of Fallout 76’s world, it’s an image that lingers in the eye, not the heart. 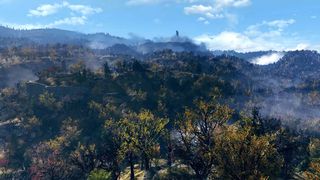 This is the only game in the series to make an apocalyptic junk heap feel empty; Bethesda’s only multiplayer Fallout, ironically, feels lonely. ‘Every character you see is a real person,’ said Todd Howard, in an interview with Geoff Keighley, a few months back. And it’s a noble vision: to see the scorched scrapyard we know thronged not by NPCs but other players. I would love to see Mr Howard’s face, then, as he’s immersed in the game’s detail and decay, only for SpiceyBwoiYoMama69 to careen across his path, pronking like a gazelle.

This isn’t to say that SpiceyBwoiYoMama69 doesn’t have a tale worth telling (from what I could make out, it had something to do with ‘blazing it 24/7’), just that it isn’t quite up to the standards of Bethesda’s writers. Where they’re given space to manoeuvre, a sombre story emerges from the rubble. The main quest has you sifting for holotapes, left behind by your vault’s overseer. Her journey is damp with sadness, hinging on ‘Reclamation Day,’ when mankind is supposed to take back the Earth and begin anew. It’s a grand notion, rolling up the sleeves and taming the irritants that roam the surface. I feel a similar wrangling is necessary with my fellow vault-dwellers.

In fairness, it isn’t all bad. I have teamed with people, fought ghouls with them, traded with them, been killed by them, and, mostly, ignored them in favour of private pursuits. Having other wanderers on your server (between 24 and 32) doesn’t vivify the experience enough to validate what’s been cut away and sanded off. Having the story unfold via audio logs won’t do when you can’t escape the clamour for a single moment to listen properly – reading, for the same reason, is a nervous chore. Then, of course, come the bugs and the shaky performance, both more extreme than in past Fallout games. 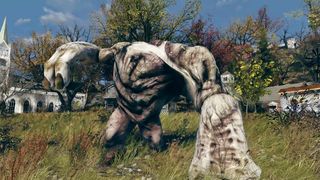 Late last month, Bethesda released a statement in which it warned, with a knowing smile, of ‘spectacular issues’ with the game. Whether or not you smile along with them comes down to personal taste, and luck. There is something irresistible about bringing a sledgehammer to the facade of immersion, but it depends on where the blow lands. I swing between being delighted and dyspeptic. An infected rad-rat that decides to slip the surly bonds of Earth’s orbit is comedic gold. A broken mission marker is just an irritant. And so is a framerate stricken with tremors.

To sooth the tremble, you might seek solace in V.A.T.S. – the Vault-Tec Assisted Targeting System – which, in older games, would slow time so you could line up shots with ease. Not so in Fallout 76, which, owing to its online-only nature, has need of a new contraption: Real-Time V.A.T.S. As you might have gleaned, this does away with the safety of temporal suspension and is a more traditional lock-on blended with hit percentages that rise and fall depending on your proximity to the target. The joy of classic V.A.T.S. was in making you feel clinical, putting you inside the gleaming skull of Schwarzenegger’s Terminator, the world awash with numbers and blown up with zooms. Here, that feeling is gone, replaced with a half-measure.

What remains fully formed is the world building, where Bethesda creates a place through what’s left behind. Fallout’s junk is journalistic. You rummage through the rubbish of another time to find out who these people were that used Abraxo Cleaner and ate InstaMash and drank Nuka-Cola. At the same time, what would be a dour mood is skewered and satirised with kitsch Americana. If you’re anything like me, your inventory looks as if it’s been assembled by a landfill compactor, always putting you on the brink of being overencumbered. 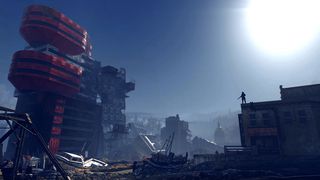 Doubly so here, where scrap is vital for crafting. Your camp, which you build in similar fashion to Fallout 4, is a moveable feast. It’s where you’ll carry out weapon repair, cooking, building, chemistry, and where you’ll offload the bloat of your baggage. You’ll need to stay on top of things more than ever, with survival elements seeping in to spoil the fun. Now, you’re jaunts come cluttered with the frequent need to drink and eat; it trammels the game’s greatest joy – open exploration – and hassles your sense of adventure. It all feels overencumbered.

Which is the prevailing mood for Fallout 76, a game that comes bearing a lovely world, and the heft of a franchise on its back. The measures Bethesda has taken to get it online come with their own weight. Out with the NPCs but in comes a server full of people. Out with V.A.T.S. but in with survival elements. Out with the bugs – no, wait, they can stay. The rest has been jumbled around or replaced with something heavier. How funny that in a game built on cuts and compromise, you wind up wishing for even more to be scrapped. Life was lighter down in the vault.