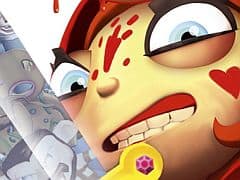 A good hack ‘n’ slash can be great fun. The likes of Devil May Cry, Ninja Gaiden and God of War have taken the foundations laid down by classics such as Double Dragon and jazzed up the formula and presentation for a new generation. Fairytale Fights is a simplistic take on the genre, taking something that everyone knows (fairytale characters), giving them weapons, making them psychotic killers and throwing in a truck load of blood. It’s an idea that has obvious shock and tongue-in-cheek humour value, but the implementation is so basic, and the gameplay so repetitive, that this is one story that should have remained unwritten.

Playlogic’s Xbox 360 and PS3 brawler lets you choose from a number of iconic fairytale characters (Red Riding Hood, Jack, Sleeping Beauty and more), then it’s time to run through the adorable levels. It’s typical fairytale stuff, as you’d see in the cheesiest Disney movies, but things aren’t cute and cuddly for long. The moment you perform a flurry of attacks on an innocent fluffy animal with an axe, or pummel lead into a lumberjack with a shotgun, the game takes a decidedly morbid direction.

Initially it’s quite fun. As much as we’d like to claim that hacking up woodland creatures and innocent looking villagers is sick and twisted, the slippery pools of blood that form beneath the carnage will raise a slightly demented smile. You can’t help it. Beating up characters as a cute little boy or girl is wrong, but it tickles the black humour end of your funny bone. It’s a short-lived thrill, though, as the tiresome and overly simplistic combat soon ruins Playlogic’s mean-spirited party.

Rather than map attacks to face buttons and have modifiers on shoulder buttons, as is the norm with the best in the genre, all your attacks in Fairytale Fights are mapped to the right analogue stick. Tap it once and your character will kick, punch, shoot or slash; tap it again straight after and you’ll start a combo, chaining attacks together. If holding the stick in a direction and then tap again, you’ll unleash a slightly charged attack. There’s also a super attack, triggered when your yellow gauge is full, but that’s your lot. The game’s general charm is enough to paper over the chasm-like cracks in the combat system for the first hour or so, but soon enough tedium sets in and never goes away.

There are loads of treasure chests dotted about the levels, each giving you more loot to add to your total, but the rewards for collecting this aren’t really worth the hassle. You can use it to upgrade your statue in the hub (a kind of fairytale home town that looks nice, but really only serves as a slow way to access options and various game stats), but why anyone would want to do that is beyond us. Top class hack ‘n’ slashes give you real reasons to collect the orbs and other items hidden throughout, rewarding you with upgraded skills and weapons. Here all you get is the odd well that you can get new weapons from in exchange for treasure, but considering so many weapons are just lying around in the levels, these fractionally better items are hardly worth it.

Up to four players can join together in co-op through the levels or in arena battles, but this will only keep their attention while they are still impressed by the colourful visuals and the sheer number of different weapons that can be used – something that deserves some credit, even if they all fall into a small list of categories. If there’s one redeeming feature it’s the presentation, which makes good use of the fairytale theme. The game somewhat resembles a children’s CGI cartoon series, and little touches like your character sliding along pools of blood show that some care went into the game’s appearance – it’s just a shame the core game is so dull and repetitive.

That more or less sums up Fairytale Fights. It’s nice to look at it and is amusing for a short while, but as soon as the presentation gloss wears off you’re left with a dull hack ‘n’ slash that makes use of an overly simplistic control system. Without the substance to go with the game’s amusingly twisted appearance, Fairytale Fights never really gets past the opening chapter.

Without the substance to go with the game's amusingly twisted appearance, Fairytale Fights never really gets past the opening chapter.
5 Cute visuals Initially quite fun Combat is too simple Becomes dull very quickly