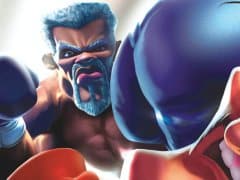 EA has entered a new age of quality games, or so we thought. After the crushing disappointment that was Mercenaries 2 comes the uber-exciting looking FaceBreaker – a game that we can’t help but liken to the Dreamcast launch game classic Ready 2 Rumble. EA no doubt intended to make an arcade boxing game that is accessible to everyone and incredibly fun to play for a laugh, but the result is a game that’s so frantic and unbalanced it starts to irritate almost immediately.

Things begin well enough. The menus and presentation have the expected EA quality sheen and lull you into thinking you might be about to play a new arcade classic. As you enter ‘Brawl for it All’ mode, FaceBreaker’s core single-player mode, and take your pick from a variety of garish but decently designed characters, hope rises to expectation. Ready 2 Rumble was years ago and to be honest we’re getting fed up of simulation boxing games. EA makes the rather excellent Fight Night games, so this surely has to be good.

Then you start a fight, you blink, and you find your character face down on the canvas after being on the wrong end of a seemingly unstoppable string of punches rounded off with a FaceBreaker – the game’s signature move that ends a match instantly and crushes your character’s face in the process. This is FaceBreaker in a nutshell: an overly frenetic button masher that barely gives you a second to think. For some this might sound like perfect post-pub gaming fodder, but it’s simply too frustrating to spend any serious amount of time with.

In what must have been one of the strangest game design meetings of all time EA came up with one of the simplest, yet most mind-numbingly annoying control schemes of all time. All combat in the game is mapped to the four face buttons and a shoulder button. You’ve got one face button for low punch, one for high punch, one for breaker attacks and one for throws. On the defensive side you can dodge by holding down either low or high punch, block by holding the shoulder button and parry by blocking and pressing the corresponding punch at the same time.

So, what happens is an impossibly fast string of punches and parries, usually ending up with you being beaten to a pulp. After a while though it’s fairly easy to spot a character’s weakness and suddenly things become extremely easy. Experienced beat ’em up gamers will likely spot these weaknesses within minutes, and with other moves that can stun characters for an extended period of time the exploits are all too freely available. This wouldn’t be the end of the world were it not for the game ending FaceBreaker moves.

If you can perform a string of uninterrupted punches tallying 10 or more you can pull off a match ending FaceBreaker. As the name suggests, this sees you character pummelling your opponent’s face in a rather brutal manner. The AI on the harder difficulty settings is extremely adept at countering your attacks and dodging, and therefore is able to pull off these devastating FaceBreaker moves with an annoying regularity. When playing multiplayer against another human you don’t have to worry about the too good to be true reflexes, but a skilled player can still end your match with relative ease.

This mess of a fighting engine is a real shame because much of the rest of the game is of an extremely high standard. Visually the game has a cartoon-like appearance, yet characters still have a believable weight to them. Some of the fighters are a little hard to take, but most are well designed and extremely well modelled. You can even use a picture of your own face (either via a USB camera or a pic uploaded to EA’s servers) and fight with a beefy-looking version of yourself. This works surprisingly well and provides a few laughs when your face is punched to hell and back. Online multiplayer also works well, with our games proving to be relatively lag free. If only the core game backed all this up.

We really wanted to like FaceBreaker. It has a lot going for it, from its superb visuals and style to the rather excellent character creation tool, but the button-mashing gameplay and easy exploits ruin all the good work. With some more subtlety to the controls EA might be on to something, but for now we’d advise you don’t get your face broken.

FaceBreaker has a lot going for it, from its superb visuals and style to the rather excellent character creation tool, but the button-mashing gameplay and easy exploits ruin all the good work.
5 Impressive visuals Character creation tool is great Smart presentation A near-terrible control system

Cartoony boxing from the creators of Fight Night.

Cartoony boxing from the creators of Fight Night.