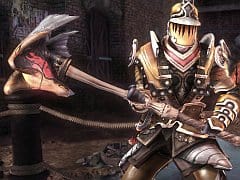 So, you’ve started a revolution, ousted a tyrannical king from his throne and saved the world from an impending evil – now what? Not a whole lot, to be honest. Fable III’s first portion of DLC offers one fifteen minute quest and two mini-games – one of which is a rehashed version of the Wheel of Misfortune. Sure, there are a handful of new weapons and extra vocal offerings from Stephen Fry, but 400 Microsoft Points (£3.40) doesn’t go a long way here. Even compared to Fable II’s sparse Knothole Island, Understone is a somewhat lacklustre offering.

Most of the content is tied up in a quest called ‘The Voice’, which takes players to the titular Understone; a forgotten village lurking beneath Bowerstone. After following a mysterious voice from Bowerstone’s factory district, you’re lead through a network of caves that eventually emerge in the diminutive new area. Along the way an ancient security system is activated, and hordes of brittle skeletal wolves and flimsy undead Hobbes pop-up to thwart your advances. Anybody who has completed the main game will likely have all their skills maxed out at this point, and the enemies simply aren’t tough enough to compensate for this.

The game also furnishes you with new overpowered weapons, which only further compounds the complete lack of difficulty. The Full Monty and Marksman 500 – both of which you’ll find waiting for you on your present shelf in the Sanctuary – are powerful enough to down an enemy in a single shot. A boss fight towards the end requires a few more bullets, but there’s no more thought or strategy involved than any other enemy in the game: shoot, shoot, roll, shoot, shoot, roll and repeat. After a few rounds of this painfully familiar cycle, the beast will drop to its mechanical knees. With the village’s security systems defeated, you’ll be presented with a moral dilemma, but it’s not half as morally strenuous as any of those from the main game. For those who aren’t tempted to stray from their ethical path, it’s a very easy decision to make indeed.

That’s all Understone’s ‘quest pack’ has in the way of real quests, but thankfully there are other activities to indulge in. Players can look forward to giving Reaver’s Wheel of Misfortune another spin, only now it’s score based, with prizes on offer for putting high-scored the board. The twisted game show plays out across six waves of enemy: wolves, mercenaries, Hobbes, Hollow Men, Sand Furies and a creature bundle comprised of enemies from the previous five rounds with the odd Balverine thrown in. A multiplier mechanic allows players to string together kills, making it alarmingly easy to score big without really trying. For every kill, your multiplier increases by one, only resetting when you suffer a blow yourself. On my first attempt I managed to rack up a score just shy of 200,000, which Jonathan Ross – the game’s zealous commentator – described as ‘Godlike’. Frustratingly, Ross spouts the same lines of dialogue as he did in the main game, recycling the same old gags. This wouldn’t be a problem if he didn’t refer to my hero as a rebel – but I’m King now, and one doesn’t care much for such abuse of formality.

The third and final thing to do is visit the reformed mercenary camp, where a shooting gallery has sprung up with the intention of improving tourism in the area. The idea is to shoot as many targets as possible before the time runs out, with more gun-based prizes on offer the better you do. Obviously Fable hasn’t set its sights on Call of Duty, but the aiming is especially floaty and there’s a horrible delay between pulling the trigger and firing a bullet. As a result the shooting range really isn’t all that much fun, and it’s certainly not worth playing again once you’ve won the top prize. Rather than wasting time with this, it would have been nice if Lionhead justified using the term ‘quest pack’ by adding in some actual quests.

It takes about forty minutes to see everything the DLC has to offer; less if you know your way about Albion. This wouldn’t be so bad if the solitary quest was interesting, but ‘The Voice’ is as unremarkable as it is generic. Annoyingly, there are no new Achievements added to the game, either, with the only incentive to play being the weapons given away as prizes. Hopefully Lionhead has some more interesting quests in the pipeline for future downloads, because Understone alone isn’t reason enough to return to Albion.

Hopefully Lionhead has some more interesting quests in the pipeline for future downloads, because Understone alone isn't reason enough to return to Albion.
5 Fable charm left intact Not a lot for your money Shooting mini-game is rubbish No new achievements

Understone brings new houses and stalls to own, creatures to conquer and…

Understone brings new houses and stalls to own, creatures to conquer and…