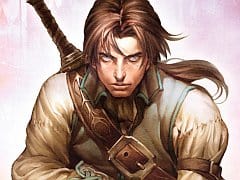 Being good has never been so hard. Lionhead’s follow-up to the Xbox action RPG Fable allows you to be the hero of your choosing, performing good or bad deeds, but at times the line is more than a little blurred. Fable II isn’t quite the epic masterpiece we and others had hoped it would be, it’s got more niggles and glitches than some will find acceptable, but it’s also a brilliant game you’ll talk about for months to come, comparing your experience with that of a friend, or even showing them your version of Albion in person.

Things begin, as you’d expect in a game about the life of a hero, with your character as a child. You have the option to play as a boy or a girl (we opted to play as a boy), and you’re joined by your sister Rose. The next 30 minutes serves as an introduction to the game’s story and controls, and acts as a way to demonstrate the decision making you’ll have to do in the game. Every decision you make shapes your character, so be bad and you’ll start to show it, even growing horns; be good and you’ll have a saintly glow about you.

The game’s main story revolves around the wicked Lord Lucien and a rather evil deed he performs at the end of the opening section. Mystic Theresa, your guide and narrator, points you in the direction of a magic spinning box, supposed to grant the owner a wish. Lord Lucien becomes aware that you were able to activate it, and calls you over to his magnificent castle.

We won’t spoil what is a significant moment in the story, but it’s enough to set the two of you on a path to meet again, and on rather unpleasant terms. Sadly your time as a child is over in a flash and you’re soon playing as a grown man. We’re sure Lionhead wanted to get gamers playing the meat and bones of the story as quickly as possible, but given that character development is so important it’s a little surprising that ageing is handled so fleetingly. One moment you’re a kid running about the streets and the next you’re old enough to have a wife and kids.

A dog you meet in the game’s intro goes on to become your best friend and your ever-present companion for the duration of the game. He serves numerous purposes that make him much more than your standard NPC. He acts as a guide of sorts (sniffing out treasure and places to dig), he’ll warn you about what lies ahead (barking if enemies are nearby), he becomes a weapon in combat (he’ll finish off downed enemies), villagers will think differently of you with him at your side, and he even tries his paw at being a key to a rather talkative door.

You might think that the dog is a gimmick and another of Peter Molyneux’s over hyped features, but he’s got this one right. After a few hours the dog will dominate all you do, whether it be wandering off the beaten track to find treasure or simply constantly looking around to see where he’s gone. Moments where he lags behind suddenly become truly worrying, for fear that he’s gone for good, and should an enemy dare to kick him you’ll be sure that that’s the last thing he ever does. Your interaction with him is fairly limited (he’s a dog after all), but the bond is strong. If he’s been hurt he’ll whimper and limp, so you’ll need to heal to him – something you’ll do above all other actions in the game, no matter what’s going on at the time.

Your other relationships in the game come from your family, if you choose to have one. By using gestures (the game’s means to interact with others, in socially acceptable ways or not) you’re able to woo the love of your life, move into your marital home (you can also buy property to rent if you like), start a family and then pay an allowance for house upkeep for the rest of your life. You won’t see your family nearly as much as you see your dog, so the relationship isn’t nearly as strong – or at least it wasn’t for us. You can instantly teleport back to your home at any time (something you can do for more or less all the main locations in the game), so you can visit as often as you like. You can dish out affection and hand over gifts (be careful not to give your wife a pauper’s ring or she’ll likely divorce you), and see your children grow up, so that relationship can really be as strong as you want it to be. For us it played second fiddle to the main quest, but each to their own.

As far as RPGs go Fable II is remarkably streamlined, and devoid of many of the barriers to entry you’d usually associate with games from the genre. You can upgrade your character using experience orbs (in Strength, Abilities and Will – magic by another name), acquire new weapons and clothing, and stock up on potions and food, but you’ll never get bogged down with the inventory or your character’s stats. In fact, if you’re unhappy with a route you’ve taken you can remove an upgrade and use the points elsewhere.

This isn’t to say that character development is poor by any means. Your hero will truly be your own creation by the end of the game, shaped by choices, corrupt or pure by your actions, rich or poor, loved or loveless. He’ll look unique, be adept at a certain set of skills and perhaps even run a business or two. You’ll just never have to spend ages routing around in an inventory screen. The game does a good job at offering you instantly selectable items or commands on the d-pad, deciding what to show you depending on the situation. If you’re low on health a health potion will appear on a direction, whereas if you’re close to your dog you’ll be able to access all the interaction gestures at the touch of a button.

Fable II is a game that almost anyone could play through. It’s not hard in the traditional sense, with combat being as simple as it can be (repeatedly pressing a single button suffices for the most part, either in melee or ranged combat). Death is something that we didn’t have to contend with, with our inventory always stocked with enough potions to keep us from falling in battle. It helps that your magic can be upgraded to incredibly powerful spells of destruction, able to wipe out swarms of enemies in a single charged spell. Towards the end of the game, after working to upgrade a few choice spells, armed with a Master weapon and the strength of a bear, a hero had truly been born.

Some may see the combat as overly simplistic, but it proves to be entertaining and fit for purpose. A game about a hero that struggles to overcome insignificant enemies isn’t what Fable II is about. Lionhead wants everyone to be able to experience a game about choices, with decisions being the main difficulty you’ll encounter. This they’ve achieved, with almost every quest or event offering you more than a single, clear-cut choice. It’s not as open-ended as it could be, but it’s far beyond a single branching path that splits the story at some arbitrary point in the game.

For as good as Fable II is, it’s not without problems that would have made the experience even better – some of which are hard to fathom. The map, for example, is one of the worst we’ve seen in a video game. It doesn’t prove to be as much of a problem as we thought it would, mainly because of the guiding glowing breadcrumb trail that always points you towards your active quest (this can be completely turned off), but finding shops and the like is occasionally troublesome. Again, we won’t spoil anything for you, but we weren’t left overly satisfied by the ending. It simply didn’t seem to suit the epic nature of the quest to that point. We’re sure it’ll work brilliantly for some of you, and isn’t a complete failure thanks to a nifty forced choice, but we wanted more. Thankfully you can continue in your world of Albion beyond the conclusion to the main story (which took us about 15 hours), so you’re free to complete any quests you ignored previously.

Although single-system co-op is available in the non-patched retail version of the game, online co-op isn’t available just yet. On a single console you share the screen with a henchman who assists you. You can choose to pay him whatever you please and share the spoils, with anything gained being carried over to a saved character already on the console – we assume online will work much the same, although hopefully with less awkward camera positions. You can already see others moving through the game as orbs, and can talk and trade with them, but the prospect of having a random player join your world is both exciting and downright scary.

As an Xbox 360 exclusive we expected Fable II to carry the presentation torch high in the air for all to see, which it does when it’s not being bumped into by a string of annoying problems. The main offender is an erratic frame rate, which at times chugs far too much. These occasions are rare, but the general performance isn’t what’s expected from a first-party 360 game. Animation also lets the visuals down somewhat, with characters moving in ways not uncommon in video games, but less impressive now we’ve seen the likes of Assassin’s Creed and GTA 4. Your dog will also do some strange things, becoming temporarily stuck from time to time or warping on top of objects instead of climbing them. It’s surprisingly amusing to see, but takes you out the game somewhat.

Something that doesn’t disappoint in any way is the audio. The voice acting is full of the expected British humour that you tend to only get from games made in this country, and the soundtrack is wonderful. We’re not sure if it matches the epic sounds of Bethesda’s Oblivion, but it’s right up there and fits the game’s tone exceedingly well. Fable II gives you a fantastic looking fairy tale land to play in that could have come from the mind of a child, and the consistently impressive audio helps immerse you into that world.

The video game industry is often criticised for churning out carbon copy shooters, delivering little more than a different way to mass murder hundreds of identikit enemies. Fable II is different. It’s a game that makes you think about what you’re doing. It hasn’t perfected the RPG, and in truth isn’t close to doing so, but it’s a massive step in the right direction and a beautiful game to boot. If you think you have what it takes to be a righteous hero, give Fable II a try. You might not be the angel you think you are.

Fable II hasn't perfected the RPG, but it's a massive step in the right direction and a beautiful game to boot. If you think you have what it takes to be a righteous hero, give Fable II a try.
9 Choices have consequences Great character development Engaging story and characters End falls a little flat

Sequel to the successful PC and Xbox RPG Fable.

Sequel to the successful PC and Xbox RPG Fable.