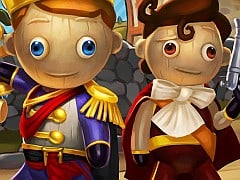 Fable Heroes wants to be fun. This beaming downloadable game effortlessly coos for your attention, as patchwork player puppets spring amusingly around a hobbycraft recreation of Fable’s signature outposts. It’s a sort of quaint British joy; a mythical Albion that Lionhead can so effortlessly wrap up and package whenever the need arises, mixed together with a touch of the English seaside puppet show. When consumed via screenshots and trailers, Fable Heroes looks like it’s going to be positively delightful.

That is, until you play it.

There’s definitely something refreshing about the look and feel of Fable Heroes, though, and the idea of strutting my stuff as an avatar of jolly smiles and fluff is always appealing in our industry of hulking bundles of sinew and fury. But it just isn’t much fun, with its brief supply of content (you can have this pretty much polished off in just under four hours, and that involves repeating most levels a second time) rarely surmounting to more than just jamming away at the attack button and hoping for the best. There’s flourish moves and some powerful pummelling attacks thrown in to give combat the illusion of depth, too, but you’ll quickly see past the trick.

Elsewhere, there’s a whole laundry list of minor transgressions feeding into the overall melancholy. The camera feels like it’s got hammered and decided to film a completely different game, the controls never quite feel precise enough to bother learning anything other than attack-attack-attack-attack and all the monsters, including the bosses, feel identical. It’s also surprisingly difficult to play: the screen is often so jam-packed with enemies and other players that you’ll regularly lose sight of your character.

But what really killed my enjoyment of Fable Heroes, more than the rest of its problems combined, was that it never manages to feel like a cohesive team experience. It might have tried to stitch together the spirit of Fable with the warm, welcome feel of the LEGO series, but its off-key brand of aimless button-mashing falls far short of the mark.

Again, on paper it sounds like a right old belly laugh – almost everything about Fable Heroes sounds like it would have been an award-winning idea at the conceptual stages – with a bit of cheeky to-and-fro with your gold supplies and a slight competitive element to your co-operative gauntlet running. Whack a few Hobbes, knock down an ice troll and gobble up copious piles of shiny money, occasionally opening a box or launching into a Mario Party mini-game. Still, it doesn’t quite come together as a team game. Partially this failure of co-operation is due to the fussy, wonky and distant camera, and the non-existence demands for teamwork in the game itself, but playing Fable Heroes generally feels like four people individually playing the same game as opposed to four people playing together.

Persistence and progression exists, but it’s all done on a character-specific basis which ensures you will never, ever switch from the puppet you originally chose. You can choose between knitted versions of series favourites, including Reaver, Jack of Blades and Hammer, each favouring either melee or a mix of basically-almost-melee ranged and magic attacks. Character progression is handled by a Monopoly-style board game, with a standard set of upgrades dotted around an outer edge, with additional upgrades unlocking on the inside edge as you play. You earn dice rolls by harvesting gold within levels, or occasionally when they drop from item boxes, and between rounds you can cross your fingers and hope for lady luck’s sweet embrace.

While a nice idea on paper, this board game makes the game go all squiffy almost immediately. Levels in Fable Heroes are designed to be competitive affairs, where the player with the most gold at the end is declared the winner, but this core principle can be quickly destroyed by your mate being fortunate enough to land on the 25 per cent gold multiplier while you’re stuck with the ability to punt tiny hobbes – they’ll win every level and immediately become super rich, and you’ll be left with the unbearably useless ability of being able to kick hobbes. It’s hardly the stuff of co-op legend, is it?

Fable Heroes is a bright and bouncy game marred by the fact you’ll spend most of your time with it thinking of other, better games. It’s one of the most painful types of disappointing game because it’s very clear that it could have been something so much better, but this sodden and poor treatment of a co-op baddie-thwacker ensures Fable Heroes never manages to become the fun game it deserves to be.

Fable Heroes never manages to become the fun game it deserves to be.
6 Lovely aesthetic Not much variety Short Bit tedious