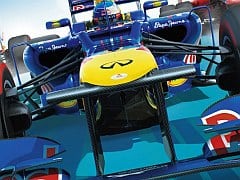 Motorsport can deliver incredible drama. So far the 2012 season has been exciting and intense, despite Maldonado’s attempts to hospitalise every driver on the grid. Codemasters’ F1 2012, however, packs a lot less surprise but just the right amount of drama.

Even though Noel Gallagher’s nasally ballad ‘What A Life’ reverberates into earshot during the opening pre-roll, there’s no glamorous, champagne-spurting superstar lifestyle here. Codemasters has done the sensible thing and scrapped the Live the Life sections of career mode almost entirely. No dull interviews, no banal post-race press conferences – even the removal of the motor home menu welcomes the departure of off-track-centric rubbish. Aside from a few obligatory checks of your in-game email, F1 2012 feels firmly concentrated on the racetrack, and it’s vastly better for it.

You’re not just handed the keys straight away, though. This year sees the addition of the Young Drivers Test. This is essentially a jazzed-up tutorial designed to introduce new players to the fundamentals of F1, similar to Gran Turismo’s License Tests. Despite the useful tips in later stages, the first few tests are far too basic. The mode comes off as contrived and pointless for experienced players, and the inability to progress to career mode before completing the first day of objectives is frustrating for competent players.

Career mode – once you can get to it, that is – is business as usual. Minor changes include the ability to switch teams mid-season, which speeds up the climb to top-tier, as well as small rule changes like the inability to alter your car’s setup once a session has commenced. The new career hub also provides more data on your progress, and the slick corner-by-corner hot-lap videos of every single circuit are especially useful if you’re looking to snag pole position on higher difficulties. Additions like Season Challenge and Champions mode add little to the overall single-player experience, but the latter’s collection of preset challenges against the six world champions is fun for the duration and helps compensate for the removal of Grand Prix mode.

Once you’re on track proper, the subtle improvements become dauntingly apparent. Driving assists are far subtler now, canning the overly easy, glued-to-the-tarmac effects of traction control from F1 2011. Simple errors are now all you need to end up in the barriers. Steering is far more sensitive; the car is lighter and more volatile in its ability to change direction. Control and patience are both vital as you carry momentum through the corners, gently managing the accelerator. Even with traction control enabled, braking too late means carrying too much speed into the apex, screeching into a flailing spin.

Meanwhile, chicanes are now a dangerous balance between friend and foe – use them carefully and they’ll give you a rubbery run-off to carry your speed through the exit of a corner; attack them too heavily and your suspension will kick out, forcing you to fight the car hard to stay on course.

The new localised weather system complicates racing even further, creating thrilling battles against nature at the worst possible times. Wet races are still as exciting as ever, but conditions are less clear-cut and strategies vary more due to a wider array of potential conditions. The circuit evolves progressively as you race, sometimes throwing you a weather-based curveball after convincing you it’s about to become torrential. If the track is overcast, entire portions of the circuit may be bone dry, whilst other segments are developing a wet, slippery surface as the heavens descend. Instead of darting into the pits as soon as you see a few drops of water land on your visor to get ahead of the pack, you’re teased to wait it out until you have a better understanding of how the track is transforming in the changing conditions. Combined with the more drastic tire degradation and tougher handling model, F1 2012 is an incredibly intelligent racing sim.

It’s a shame, then, that the AI is still not up to professional standards. It’s improved since last year, but you’ll still find yourself obstructed by slower cars when you’re on a flying lap, or catch yourself sighing as AI drivers fail to react realistically to racing scenarios. It’s not so distracting that you’ll automatically desert single-player in favour of online multiplayer, but when so much has been done to convince you you’re sitting in the cockpit of a real F1 car, it’s disappointing that the other drivers are what break the illusion of authenticity.

Imbalances in difficulty shatter the realism occasionally, too. On the toughest setting, I found it near impossible to place my Caterham F1 any higher than 15th on the grid in qualifying – as you’d expect – but knocking the difficulty down one notch saw me out-performing the rest of the pack by 2 to 3 seconds a lap without breaking a sweat. Whilst playing on the highest difficulty is undoubtedly the way to go if you’re looking to play F1 2012 at its challenging best, the lack of middle ground means you’ll generally have to play on a harder difficulty than you’d like, just so you’re not repeatedly lapping the rest of the field in a world of your own.

Of course, nothing’s tougher than racing the speed-obsessed nutcases who loiter in the online lobbies. Without any notable improvements, multiplayer is left to contend with an old coat of paint this year, but it’s still a joy to play other human beings without pesky AI getting in the way. Providing you’re racing with a party of likeminded drivers who aren’t wasting their time turning each race into a demolition derby, playing online displays F1 2012 at its finest.

The subtle improvements are almost invisible to an untrained eye, but F1 nuts will find immeasurable satisfaction in taming and tuning this year’s cars to performance perfection. When the small changes combine to make an already brilliant formula that bit better, who cares about new stuff? Codemasters has given the curse of yearly development cycles a boot to the face, and it continues to deliver in style.

The subtle improvements are almost invisible to an untrained eye, but F1 nuts will find immeasurable satisfaction in taming and tuning this year’s cars to performance perfection.
8 Still immensely challenging Handling is spot on Localised weather is intelligent No major changes, multiplayer the same