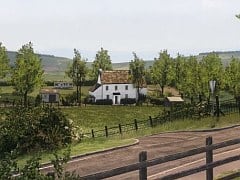 Everybody’s Gone to the Rapture Review

The countryside, contrary to whatever you may have seen in anodyne BBC documentaries or glammy lifestyle homebuying shows or whatever other shite you’ve been watching, is remarkably terrible. Beautiful it may be, of course, filled with greenery and hills and gorges and valleys. Look closer, however, and it all falls apart: demented farmers, parochial conflict, bored lives messily intertwined via nothing more than simple proximity, like TV cables with stupid accents. Granted, all these things happen in cities. But there’s something about the psychology of those who would choose to live – or not leave – their own particular Royston Vasey, and Everybody’s Gone to the Rapture exploits that something to excellent effect.

Arriving in the small Shropshire village of Yaughton (and its surrounding valleys, farms, camp sites and other communities) in the mid-80s, you’re tasked with trying to unravel a very British apocalypse. Which is to say the the inhabitants of the village seemed to have disappeared not in a bombastic shower of scorched earth and ruined beauty, but in a politely minimum-fuss extinction where the only real evidence is that there’s a bit of blood about – almost always accompanied with a tissue or a hanky, we’re not louts – and some car or house doors being left open when they really shouldn’t be.

Spend an hour with Rapture, though, and it becomes clear that its outward rending of the villagers from their homes really plays second fiddle to the dramas of their everyday, non-techno nightmare predicaments. The primary characters, of which you’ll encounter a good handful, have lives that mirror their gardens: pristine on the surface yet knotted and interconnected, sometimes haphazardly, with those around them.

When getting around Yaughton it’s difficult to know where one person’s land begins and another’s ends, and their problems share much the same makeup. There are affairs, accidents, regrets, and various other low-rent miseries, and although the game can sometimes feel like a sort of sci-fi Midsomer Murders in the volume and scale of its dramas, it is effective in coaxing emotional responses from the player.

Not that that means you’ll cry, or have a big think about it all after you power off the PS4 to watch Naruto. But as you explore, taking in holiday camps boasting the kind of painted smiles and general naffness that defined many a childhood break, or GP surgeries or pubs or whatever else people do for entertainment in Countryheil, there’s tangible disquiet in the various lives that are broken or, at best, merely bruised. There is significant focus on the panic and alarm of the quarantine zone set up by the authorities, the disappearances of loved ones, a fear of the unknown becoming very quickly bloody well known, mainly expedited by technology, both in practice and allegorically.

The vignettes which display the disappeared one’s lives, hopes, and fears are presented as little light shows, with characters moonlighting from Rez acting out their issues. It’s your job, in the main, to follow a ball of light around to uncover these vignettes. They advance the story of the townsfolk, and in doing so bring you closer to the end of the game, if not an ending in which you’ll have all the answers.

In fact, the ending is probably the weakest part of Rapture, boasting the sort of waffly philosophy berk-speak last seen during the end of The Matrix Reloaded, or NeoGAF Off-Topic. It also exacerbates problems with some of the characterisation. Second lead Dr Stephen Appleton, returning to his hometown after getting a PhD in the US, is a conflicted prodigal son and a real arsehole to boot: greedy, for both scientific glory (you can see where this is going) as well as love, he carries on affairs, telling at least two women he loves them on a regular basis; he occasionally hypocritically calls people out for being ‘spineless’; and he’s has a superiority complex bigger than any games journalist.

That is, until he doesn’t. He’s also somewhat courageous, unselfish, clear-headed and smart, confused about whether he wants to reach for the stars or put down roots. He helps people as much as he hinders them, a smart man sabotaged by very human bullshit. It’s not perfect: the nobility of his decisions at the end of the game are perfectly compliant with the conflicted, complex man who Eventually Does The Right Thing trope that we’ve all seen forever. But it’s better than the treatment his American wife, Dr Kate Collins, gets.

Ostracised by the community due to her origin, her accent, and (it’s implied) her looks and/or dress, she starts off as a crusading scientist attempting to make a startling breakthrough and then devolves from there into an expositional tool (she gives players, over the radio, updates on how the mission and as such your progress through the game is going), less a driven and more a despotic figure determined to get the answers anyway she can. Allegorically this may work, but really her constant, one-note aggression starts to wane, especially when compared to her very natural pained reaction when she discovers Stephen has been for a drink with his ex-fiancee.

Rapture falters elsewhere, mainly in its often-stuttering frame rate, some showstopping bugs (three hard locks in five hours or so with it) and pathfinding issues to do with the ball of light which guides you around. The latter is actually the most painful: it can be immensely frustrating to be lost in a field, especially given the default movement and head-turning speed approaching ‘injured T-800 from the end of The Terminator’ (you can run, although the game doesn’t tell you this and I found out a little too late). Its glacial pace suits its setting, that much is true, but getting lost and not knowing what to do to progress isn’t a good look for any game.

It succeeds, however, in making its human issues more relevant – and more interesting – than its sci-fi trappings, drawing players into a pastoral drama which captures the fear, isolation, and sadness of people whose lives are essentially fucking Emmerdale.

Everybody’s Gone to the Rapture

You play the role of a scientist, trapped in the very second…

Everybody’s Gone to the Rapture

You play the role of a scientist, trapped in the very second…