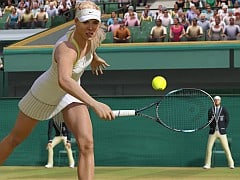 Imagine a football game with no headers, and no corners. Even if every other part of this mystical FIFA competitor played a supreme game of digital soccer, where the passing was perfect, the shooting spectacular and the tackling tremendous, you’d still look at it like the bumbling idiot it so clearly was; you just can’t miss out on huge fundamentals of the sport you’re trying to recreate. It would be ludicrous.

Thirty or so matches of EA’s Grand Slam Tennis 2 later, then, and is it too much to ask for the ball to drop out of play even once? Just one time? Yes, you can fire a serve wide or long, but in open rallies it’s seems completely impossible to send that fluffy yellow ball beyond those chalky white lines. And do you know how many times it hit the net in that same timeframe? Once.

Quite why Grand Slam Tennis 2 plays so fast and loose with the laws of physics and the reality of actual tennis is a bit of a mystery, but if I was the modern TV detective Sherlock… well, I wouldn’t be playing Grand Slam Tennis 2, but I would deduce the only way to make EA’s bullet-point-friendly Total Racquet Control work was to have such a humongous margin for error that it was actually impossible to make an error at all. You didn’t think of that one did you, Watson?

Anyone who’s played an EA Sports game in the last decade can probably figure out that Total Racquet control entails twiddling the right stick. Or, more accurately, jabbing upwards for a flat shot, thumbing backwards for a slice, or a thumb-jabbing backwards then forwards for top spin. Where you aim your thumb is roughly the direction your shot will travel, with the ball landing deeper in your opponent’s court the further you press the stick to its edges. It’s a fine system, although rendered completely unnecessary after a fiddle with the game’s more accurate standard controls, yet it does allow you to get a pleasing knack for wrapping your wrist around a particularly eye-popping passing shot or delicate arching lob.

Spin plays an important part, as it should. Like the underrated Rockstar Games Presents Table Tennis, spin shots are accompanied by a coloured hue, so you know to counter slice or attack a flat shot with some heavy top. But if only there was some sort of risk in really pushing for the corners or attempting that impossible-looking cross-court winner. You either hit it perfectly or mess up the timing slightly and the ball goes a bit slower. Your opponent either hits it back or doesn’t. It’s about as tense as spaghetti.

It’s not all bad. If you’re happy to suspend your disbelief for a minute, Grand Slam Tennis 2 still plays a competent game of tennis and, due to the fairly established fact that tennis is a fun game, so is this. Smacking the ball around Wimbledon’s Centre Court with Djokovic and Nadal is suitably exhilarating in short bursts, thanks to the occasionally excellent animation, and there’s always satisfaction to be had in drawing your opponent over to one side of the court, cutting off the angle and dispatching a clean volley out of his reach. The problem is, that was fun in the original Virtua Tennis back in 1999 – and tennis games have advanced since then.

So if the on-court action isn’t setting the tennis world alight, what of the wealth of modes and options you normally expect from an EA Sports effort? Considering the Grand Slam ‘license’ and the proliferation of real players, surely there’s a veritable McEnroe’s worth of fluff to get your Wilson stuck into? Well, not really.

For a start, Career mode is so utterly dull it should come with a health warning. Capturing the tennis tour’s ‘excitement’ has never been a particularly easy task, but Grand Slam Tennis 2’s procession of relentless games, sets and matches will have you clamouring for Virtua Tennis’ giant multicoloured beachballs. It’s so dry and devoid of personality it feels like the console actually developed the entire mode itself while the team were hanging out with Pat Cash in the audio booth.

An ESPN classics mode offers a few scenarios to beat, and there’s a smattering of online and creation options that have been Ctrl-C’d from every EA Sports game ever, but nothing that could hold anyone but the most ardent tennis nut’s attention for more than an hour. It begs the question; just why does Grand Slam Tennis 2 exist?

The original was a caricatured tech demo for the Wii’s Motion Plus tech, and perfectly acceptable in that role, but now the charm has been replaced by cookie-cutter FIFA 12 graphics and substandard racquet smacking. And the motion controls can’t save it, either. While Move is clearly the best motion controller available for a tennis game, it doesn’t excuse the game’s fundamental problems. Sports Champions’ table tennis game is more accurate and believable.

Finishing off the package is a smattering of little glitches that serve to sap the excitement out of any rally. Players will often not bother to swing at a passing ball – chasing lobs in particular is a no-no. Conversely, though, they’ll also occasionally teleport a few inches into position to match up their animation cycles. The ball also froze in mid-air for a split second on more than one occasion.

Again, it’s important to remember that there’s still a enjoyable bit of bat-and-ball in Grand Slam Tennis 2, but it’s been done so much better elsewhere so many times that it’s almost impossible to recommend. It has neither the depth of Top Spin nor the excitement of Virtua Tennis, and is bizarrely inferior to its predecessor in almost every way.

There's an enjoyable bit of bat-and-ball in Grand Slam Tennis 2, but it's been done so much better elsewhere.
6 Solid fundamentals Some good animations Bland and characterless Neither simulation nor arcade