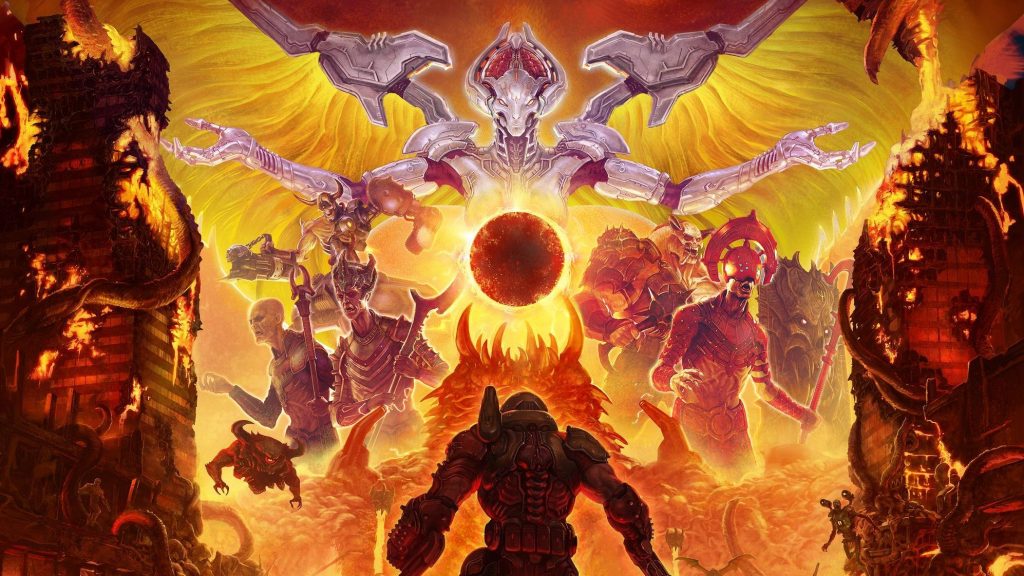 One of the nifty side effects of Doom Eternal, a first-person shooter about portals that lead to Hell, is that playing it seems to open one. Over the weekend, my PlayStation 4 produced such an angry fusion of heat and hiss that I expected rivulets of lava to flow from the fan vents, and for my coffee table to catch fire at any moment. I’m not complaining, far from it. Why shouldn’t a console be a method for immersion? If, as we blast our way through the demonic multitudes, we should fear a non-digital inferno, is the effect not heightened? The game’s developer, id Software, deserves our recognition, for going further than any other: it’s willing to risk roasting its players, just to show them a hell of a time.

Fans of the franchise—particularly those whose loyalties flickered after the horror-dimmed corridors of Doom 3 and were fired back up for 2016’s spiritual reboot, entitled confusingly Doom—will have now reached a foaming state of anticipation. And as far as id Software is concerned, long may the foaming continue. Doom Eternal returns to the ground on which its predecessor triumphantly strode; namely, that of pushing you into an existential zone where your thumbs and your thoughts overheat and melt into a sticky harmony. Indeed, it’s only when you stop playing, feeling somehow frazzled, energised, and jittery, that you realise the game has as much in common with the audiovisual arts as it does with a double-shot of espresso. The cartoonish tenacity of its violence and the way that the story, served blackly comic, is secondary to the thrills and spills of the senses means that some may peg it as mindless. 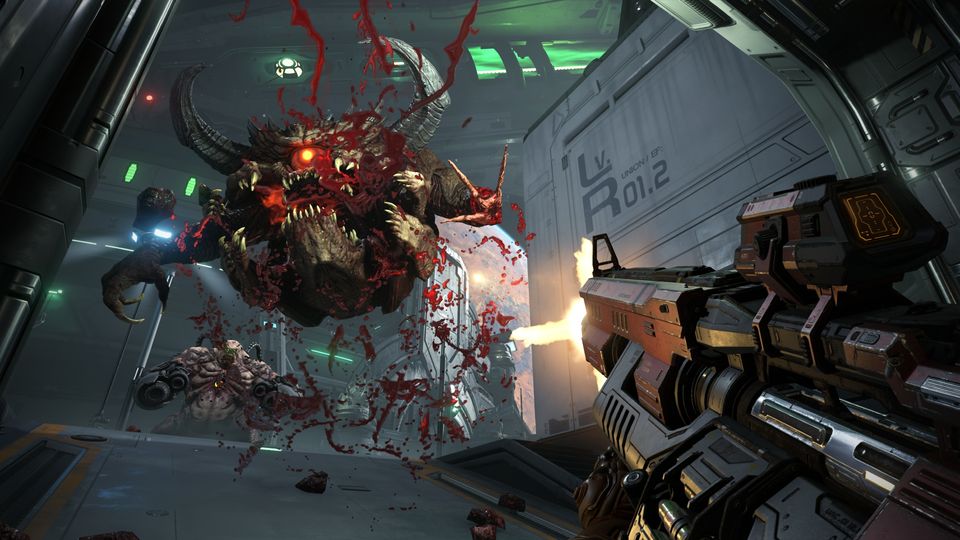 The simple remedy for this would be to sit those people down, load up a level, and see how far they get before they lose their minds. The game brutally punishes those who aren’t present, and richly rewards people who strategise. The director of the previous game, Marty Stratton, described the on-screen carnage as “combat chess.” I always thought the suggestion was a little grandiose, and, although I haven’t checked the official match records, I don’t think Garry Kasparov, despite his history of competing against machines, ever sat opposite a Cyber-Mancubus—or wielded a Combat Shotgun, for that matter. Still, such sporting comparisons prove that it’s your head that lies in the developer’s crosshairs: a noble mission for any game. And, further to its credit, Doom Eternal arrives teeming with new pieces to bring to the board.

I particularly got a kick out of the environments. The plot, in homage to Doom II, from 1994, sees Earth’s cities overrun with Hell’s legions, and thus we are treated to a molten mixture of concrete and viscera, under a sulphurous sky, as the metal spires of our future are besieged by what one character calls “the fire and brimstone element to this catastrophe.” The arenas through which you tear have been retooled to include poles for swinging off and walls to clamber up and spring from. Along with your dash, which can be used evasively or as a means of traversal, these elements coat your encounters with a teflon finish. In terms of tactics, the level design forces you to adopt the prowling mentality of a shark and treat moving like breathing. The result, when you are in a groove, is a primal, bloodthirsty brew of high-velocity cruelty that only id Software, true to its name, seems capable of dishing up. 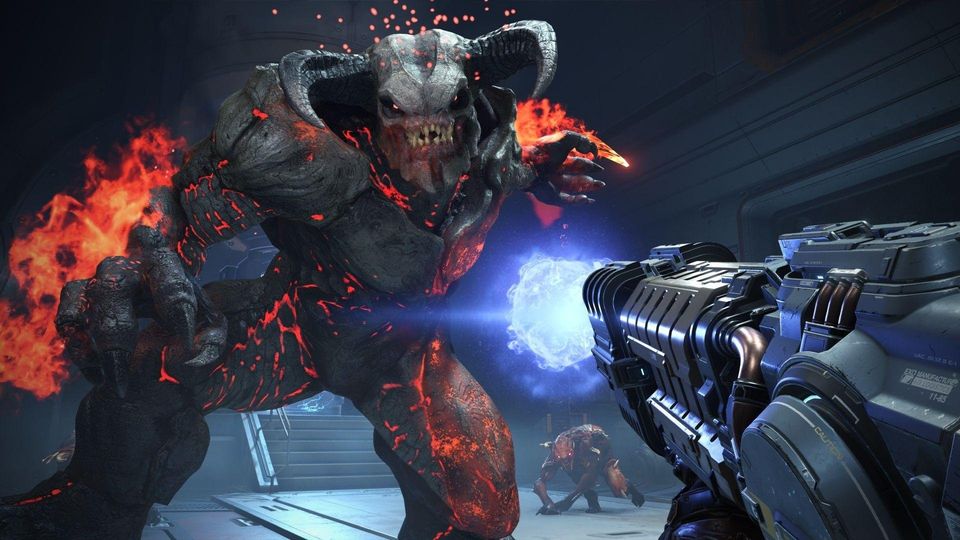 It seems quaint now that, when these games first appeared, with the original Doom and its sequel, in 1993, they summoned forth a firestorm of controversy. It was as though, with their sprightly brutality, they ushered in the end of the world’s youth—sparking a conversation about video game violence that has long since grown stale, if not silent. Does it reflect the medium’s maturing sensibilities, or simply that we have become numb to depravity, that controversy now requires more politically charged crimes—the use of child soldiers and white phosphorus, in Call of Duty: Modern Warfare, for instance? You can’t possibly imagine that sort of outrage levied at Doom Eternal. We are dropped into the boots of a hero who, in the words of one of Earth’s bystanders, “knows no mention of the hesitation shown by our many leaders and politicians during our time of judgement,” and presents us with a guilt-free gauntlet: there’s no such thing as a politically charged crime when it comes to a Cacodemon.

Hence the return of not only most of the weapons from 2016’s Doom but a glinting armoury of new ordnance. In homage to the alien menace in Predator, you now have a spring-loaded wrist-blade, adding greater bursts of gore when you trigger a melee finisher; and a shoulder-mounted cannon, which launches grenades and ice bombs, and vomits out a spume of napalm. The chainsaw makes a rustic return, as does the Super Shotgun (now with a grapple hook under the barrel, for zippy escapes and pursuits), both invoking the incantations of Sam Raimi’s The Evil Dead. These are not tools of savagery alone but strategy. Enemies set alight release armour, those killed up-close with a takedown drop health, and any who are chewed up by the chainsaw spew ammunition. Mastery of these rules needs not only to happen but to happen at high speed. I was in need of a rest, after playing for a couple of hours, not because of the sonic bruising of Mick Gordon’s heavy metal soundtrack; not because of the optical overload of the demons, in all their manic variety; not because of the sheer bone-splintering spectacle of it all. But because I was tired of thinking. 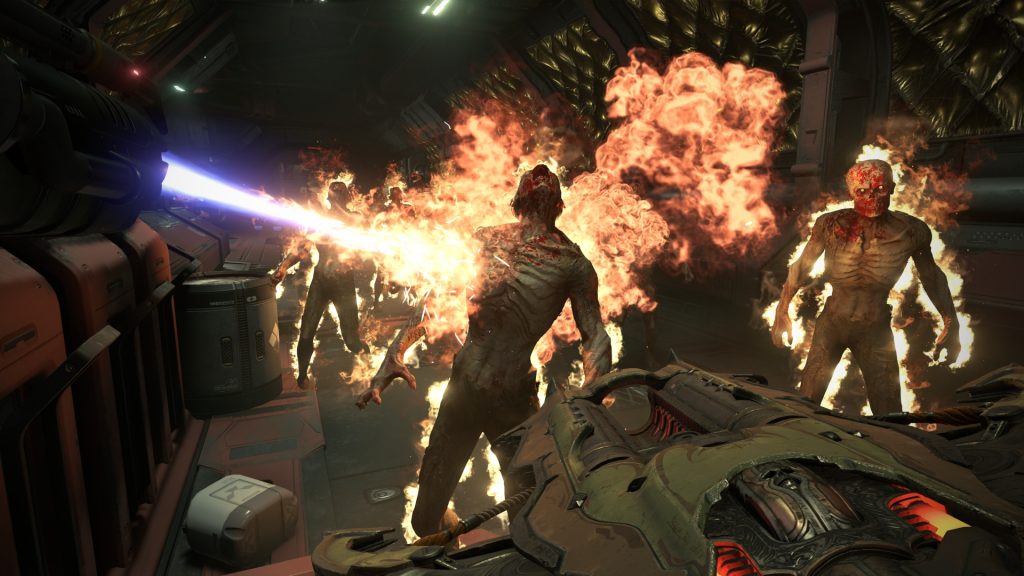 In an effort to provide a salve for the seethe of combat, the environmental features are repurposed in stretches of platforming, clearly employed as a between-battle breather. You could argue that matters of breath and tranquility are best left to us, not id, and quite how some of the more puratanical series veterans will respond I’m not sure. What is for sure is that there is a definite touch of clunk to these mechanics; climbing a wall, for example, results in a jagged trembling of the screen, as if the game were afraid of its newfound need for elegance. Sticking a landing feels like persuading a jeep through a gymnasium.

If reading this has you wringing your hands, worried that you might be wrenched out of Doom Eternal’s blood-dark mood, fear not; if anything, we are plunged too far into its depths. The director is Hugo Martin, who served as creative director for the last outing. Martin is, in the best way, a nerd; to witness his impish grin, as he talks all things satanic, is a lesson in the life-affirming power of geeking out. In an interview about his work on the series’ codex—the account, accessible via the pause menu, in which the worlds, weapons, and demons are given extensive detail—Martin said, “I could read that shit for days.” That’s all very well, and there will be fevered factions who will share gleefully in the sentiment, but as I hopped between nutty alien civilisations and choked on mythological mouthfuls like “Deag Grav” and “Argent D’Nur,” I missed the restraint of Stratton (now serving as executive producer), who was willing to lay down the lore in favour of a more pared-back simplicity. 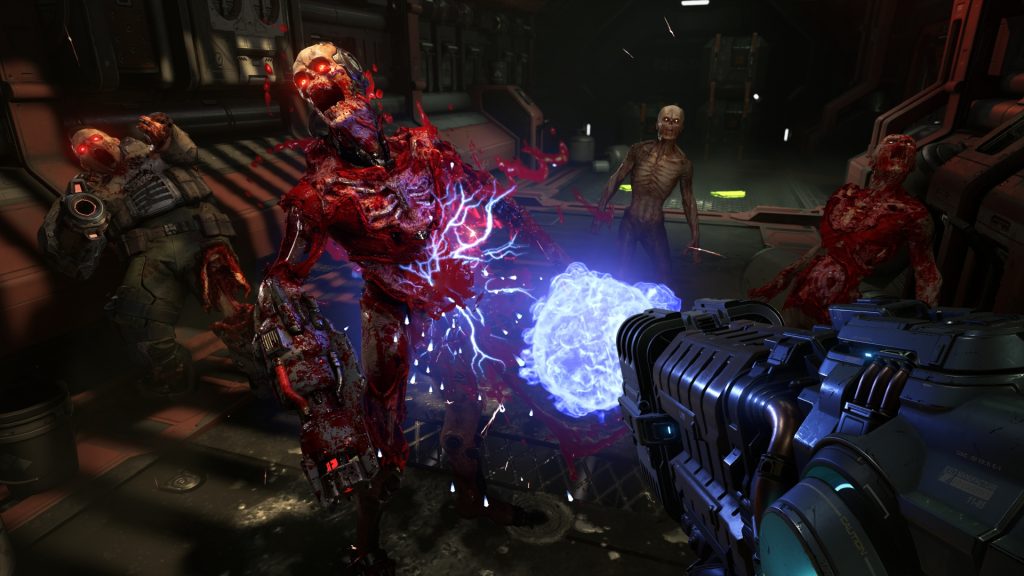 Much of Doom Eternal is spent digging through its hero’s origins, which—like the recent efforts to raid the personal history of Lara Croft, looking for the psychological texture that might drive someone toward tombs—winds up straying somewhat from the point. Note the Fortress of Doom, the spaceship hub that brackets each mission: it’s basically the batcave, replete with vaults housing alternative suits of armour, trophies from your travels, and even a desk cluttered with floppy disks. The self-aware humour of the series is intact, but here it scrapes against the need for backstory and feels faintly out of place. At one point, a scientist muses on the nature of our hero—variably referred to as Doomguy, Doom Slayer, and the Doom Marine—“Maybe he represents human kind’s rage,” she says. Maybe so, but suddenly I’m seeing the merits of mindlessness.

It’s only when you stop playing, feeling somehow frazzled, energised, and jittery, that you realise the game has as much in common with the audiovisual arts as it does with a double-shot of espresso.
8 Brutal, clever combat Hell on Earth Delicious new weapons make for richer tactics Focus on mythology