Your left mouse button is useless. It’s not needed, and neither is your right. Dear Esther doesn’t require you to interact with these inputs. It merely asks you to walk, to explore, and, most importantly, to listen.

Whether or not you want to play Dear Esther shouldn’t be up to whether it is fun to play (it isn’t), whether it’s got some great mechanics (it doesn’t), or whether the difficulty spike is unfair and frustrating (it’s not; there isn’t one).

Dear Esther depends entirely on two things from its players: an open mind about what exactly constitutes a game (and whether that is something you’ll get hung up on) and an appreciation of its bleak, ambiguous narrative that requires you to decide its meaning rather than be spoon-fed it.

In its formative stages as a Half-Life 2 mod, Dear Esther called itself a ghost story. It’s not. The desolate island it has you explore is certainly creepy, in the same way that anything abandoned plays with your fears. This world has its own history, and not explicitly knowing its background is enough to thrill. There are light touches, and unanswered questions, that feed into this lack of knowledge, which in turn heightens our fears, but it’s not a ghost story in a traditional sense.

Well, maybe it is. My Dear Esther isn’t a ghost story. Maybe yours is.

You walk, and randomly selected chunks of narration ambush you when you trip invisible, intangible tripwires. Whereas something like The Path actively encouraged you to deviate from the path, and find its obtuse dioramas, Dear Esther doesn’t give you that option. Everywhere is the path, and everywhere leads where you need to go. There’s only really one direction to travel, even when it seems like there’s more.

I’m dancing around talking about the game; it’s not easy to write about, because if you go into any depth you’ve ruined the thing. Delve into the story before experiencing it and your perception will be coloured, and how you perceive it is half the fun. Discovery is such an important part of Dear Esther, especially when everything is so phenomenally pretty.

What The Chinese Room has done with the Source engine is a miracle that even manages to put Valve to shame. Comparing the original mod to its current incarnation, Dear Esther is now breathtaking to observe, morose and bleak but absolutely breathtaking. It manages to capture that feeling you have when you’re forced to go for a walk with your family after Christmas lunch and you realise that, well, nature is pretty bloody beautiful. It’s cold, and there aren’t many leaves around, but gosh it’s pretty. It feels like a revelation.

Dear Esther is that same revelation, slipped innocuously into a videogame.

There’s worry that Dear Esther isn’t a game, that it’s merely a short story shoved into an engine, a film vignette created in Source – and without that very immediate sense of interaction, it loses its right to be a game. Doom might raise the question of whether we can talk to the monsters, but at least it let you shoot them. Hell, at least there were monsters.

Dear Esther lets you play with it, but it doesn’t ever confirm or deny that the way you’re playing is right. While we do need some way to interact, to expect that interaction to be purely by way of immediate feedback – that our relationship with games is binary, one driven by keystrokes and mouse clicks – seems narrow-minded.

You’re presented with the little fragments of narration in Dear Esther, each giving you a little more information on the whole, a slightly clearer picture, with most contradicting something that went before. The ‘game’ is in bringing those pieces together to form a clear picture in your head. It’s about throwing out what you don’t want or need, and keeping parts that resonate with you. You’ll end up with a picture of a story that’s wildly divorced from both what the game presents, and what anyone else ends up with.

I think that’s kind of beautiful.

That’s not to say Dear Ester is without flaw, as the middle section of the game tends to go against that unguided linearity that the more open levels thrive on, leaving what little choice you did have by the wayside for a good portion. It opens up again afterwards, but only momentarily.

The beauty of Dear Esther is that it raises questions about content rather than mechanics. It strips out anything that can get between you and what it wants to say, and every problem relates to how the game presents its story, and how effective that story is. We don’t have to worry about production values, or whether the whole thing will fall apart in a buggy mess. It’s what The Chinese Room wants to show you, and how you take what is shown. No barriers of entry. No obstacles. No guff.

Whether you like what Dear Esther has to say, though, is entirely up to you.

The beauty of Dear Esther is that it raises questions about content rather than mechanics.
9 Real sense of place Bold narrative All the pretties Tends towards linearity 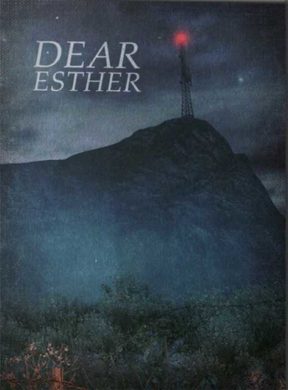