Lock’s Quest, the 5th Cell (Drawn to Life) developed DS strategy title, is as good a tower defence game as you’re going to get on a handheld. Everything you could possibly want from the increasingly popular genre – waves of enemies and structure building – you’ll find here, wrapped in a sugar-coated, almost anime art design that’s sure to appeal to hardcore and more casual players alike.

As the wonderfully self-explanatory title suggests, you play as Lock, an orphan who dreams of one day becoming an Archineer (a combination of an architect and an engineer). His small seaside village is invaded by a Clockwork Army, similar in design to the Golden Army in Guillermo del Toro’s Hellboy 2, and his sister Emi is kidnapped. Lock finds himself caught up in a war between the Kingdom Forces and the Clockwork Army, led by the evil Lord Agony. It’s all over Source, the world’s natural resource and a dead-ringer for oil. It’s even accessed via Source Wells, which, by the way, you’ll spend a lot of time protecting in the many missions Lock needs to complete as he works his way up the Archineer food chain and hunts down his sister.

While the story is solid, and contains some surprising plot twists and ‘I didn’t see that coming’ moments, it’s the core gameplay that’ll keep you going throughout the 20 or so hour single-player campaign. Each battle begins with what’s called the Build Phase. Here, you’re given a small amount of time to spend what Source you have on constructing walls and turrets, laying traps and positioning bots before beginning the battle. The toolbox is wonderfully easy to get to grips with – you simply drag wall pieces and what not from a window onto the field of view and the game will make them fit in the squares that make up the battlefield, viewed from an isometric perspective. Once you’re done the Battle Phase will begin. Here it’s a case of using the stylus to move Lock around the map like a headless chicken, dividing your time between repairing walls damaged by the Clockworks and fighting the Clockworks themselves. The idea is to outlast the onslaught – when the time runs out all the Clockworks crumble into small piles of nuts and bolts.

Bar the odd path finding issue, and some problems touching the right thing when there’s lots of stuff on screen, moving Lock is as intuitive as you could hope for. You can either point and drag, or simply point where you want him to go and he’ll go there. By touching a damaged structure Lock will start repairing it – there’s a mini-game here, called Ratcheting, which involves moving a lever at the bottom of the screen back and forth to speed up the repair. When you touch a Clockwork Lock will start fighting. If the enemy has enough health another mini-game will present itself – this time you have to touch randomly sequenced numbers from lowest to highest to trigger powerful combos. Lock’s also got a number of super abilities that can really help turn the tide, including Goo Storm, which slows every enemy on the map and the brilliant Repair All, which, as you might suspect, repairs every damaged structure.

The strategy comes from good preparation and good micro-management during battles. At first the game won’t present much of a challenge, but soon enough you’ll have to start thinking quite heavily about creating forced choke points with your defences and adapting to the Clockwork attack as the battle evolves. When you eventually unlock all of the available defence pieces, and have to contend with some of the more difficult Clockwork types, things can get very frantic indeed. You’ll need to divide your time between defending multiple structures and attacking others. Lock’s Quest might look like a game for children, but you’ll need a seasoned strategy mind to beat the later levels.

If you like the sound of how a typical battle plays out in Lock’s Quest, then we can’t recommend it enough. The art design is unique, the story akin to one of Square Enix’s RPG DS titles and it’s a great game to play for short bursts of time, perhaps on a regular commute, because the battles themselves don’t take too much time to complete. And, if you do get through the campaign, the multi-card play option will keep you going as long as you know someone who also has the game. But, ultimately, if the tower defence genre isn’t your thing, then Lock’s Quest isn’t going to float your boat. 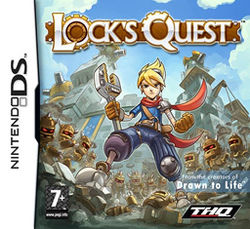 A tower defence action title from 5th Cell, the creators of Drawn…

A tower defence action title from 5th Cell, the creators of Drawn…