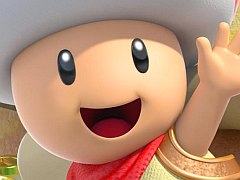 Captain Toad: Treasure Tracker is causing me a lot of trouble. Not from a legal standpoint or anything, but in attempting to describe it for this review, I am forced to use words that I absolutely loathe [and, under normal circumstances, are banned – Ed]. So, here we go: This is probably the most sickeningly cute and (deep breath) charming game I’ve played all year. While it may not offer a significant enough challenge to keep many players around for too long, in a game that’s all about manipulating perspective, Nintendo remains true to its own vision and offers a neat little package that’s fun from start to finish.

Treasure Tracker is like Nintendo’s arcade version of Fez. Each level is its own self-contained cube for players to move and rotate in order to collect loot as either Toad or Toadette (the difference between Toad and Toadette is that Toadette has little toads on her head). The main objective in each of these puzzles is to collect three diamonds by rotating the camera around the stage as well as using the tools at Toad’s disposal, from pickaxes to body-duplicating cherries. Collecting enough on your travels unlocks later stages.

It may sound somewhat complex, but the diamonds are all relatively easy to obtain. I only missed a handful of the gems in my time with Treasure Tracker, replaying just a few levels to grab those missed first time round. This isn’t a Mario game: there’s no time limit for completing a stage, no jump button, and coins feel included more for series novelty than a necessity for gaining lives. Gameplay unfolds at a refreshingly leisurely pace. Toad strolls around at a canter as you tilt, turn and slide the camera to work out where to go next. There’s still a run button, but I rarely found myself needing it outside of boss battles.

Some may see this lack of urgency as a drawback, but there’s enough content on offer to prevent it feeling lightweight. You may not struggle with any one level, but with over 70 stages across the game’s three main chapters (plus an entire bonus chapter), there’s certainly a lot to get through. There are also additional objectives in each stage in an attempt to add challenge not found at first glance, but they’re mainly filler and don’t really give much of a reason to go back for non-completionists.

Each level is small, then, and not especially taxing. But they’re also layered with as much variety in the design as you would expect from Nintendo. You’ll be knee deep in lava one minute and up in the clouds the next. Some stages take a few minutes to finish, others can feel like just a few seconds, but each is wonderfully put together and fun to explore.

The short time spent in each level is a good thing. Most are larger than the Captain Toad mini-games seen in Super Mario 3D World, but none outstay their welcome. If they were as expansive as those seen in the plumbers’ outings, then there’d a risk of getting lost in the world rather than stuck into the puzzle. By keeping things compact the player always knows where to go next, and is left to work out how to get there.

Treasure Tracker is also filled with nods to the Mario series, like the classic design of keys from Super Mario World, pulling vegetables like in Super Mario Bros. 2, or the old school Bullet Bill sound playing as they’re fired from cannons. It’s these little touches that build Treasure Tracker’s appeal. Toadette will shiver after first encountering a Boo in a haunted level; Toad juggles a boiling hot gold star after completing a lava-filled stage. These minor animations may not sound like much, but they add depth to the already loveable characters.

Treasure Tracker’s only real issue is that sometimes, as Toad moves in and around every nook and cranny, the camera can’t keep up with the little fungus. Increasing the sensitivity doesn’t quite suffice, especially when Toad moves from the front to the back of a wall, requiring a 180-degree rotation. This can lead to cheap deaths if an enemy is waiting on the other side, and with no checkpoints thanks to the brevity of each level, it can be a pain, if a rare one. There’s a button to zoom in on Toad, but it’s still an issue.

That aside, Captain Toad: Treasure Tracker is exactly what it needed to be: a simple, fun and engaging experience that maintains its base competencies throughout. It’s a one-trick pony, but it’s a neat gimmick and one that didn’t get old in my time with the game. Had it been any longer I probably would have got bored, any shorter and it would have been hard to justify a purchase. You won’t be scratching your head like with other puzzle titles, but that doesn’t make the experience any less enjoyable.

I’ve not played it as much as Brett, but Captain Toad has already established itself as classic Nintendo fun that could be enjoyed by anyone. There’s no doubt that the super-cute visuals and soft lighting help, doing for Treasure Tracker what big eyes and floppy ears do for puppies, but the core gameplay is still supremely moreish despite its simplicity.

The key is in the variety on offer. You’re generally spinning your perspective around (or objects in each level) in order to find hidden items, but the locales are diverse and there are even boss encounters. If you’re looking for an adventure or story like you’d find in 3D Mario games, you’re best to alter your expectations before you get going, as you’re essentially plonked into the world and given less reason than an F student’s physics paper.

It’s all rather lovely, though, and gets by on whimsy. While not a knock on the Wii U game, I do wish it was on the 3DS or at least available in some form. Not only would the bite-sized levels work well on the handheld, but the cube chunk worlds would shine in 3D.

Captain Toad: Treasure Tracker isn't the most taxing puzzle game in the world, but it's well-paced and enjoyable all the same.
7 Surprising amount of content. Good level design. Lack of challenge may irk some. Slow pace not for everyone.